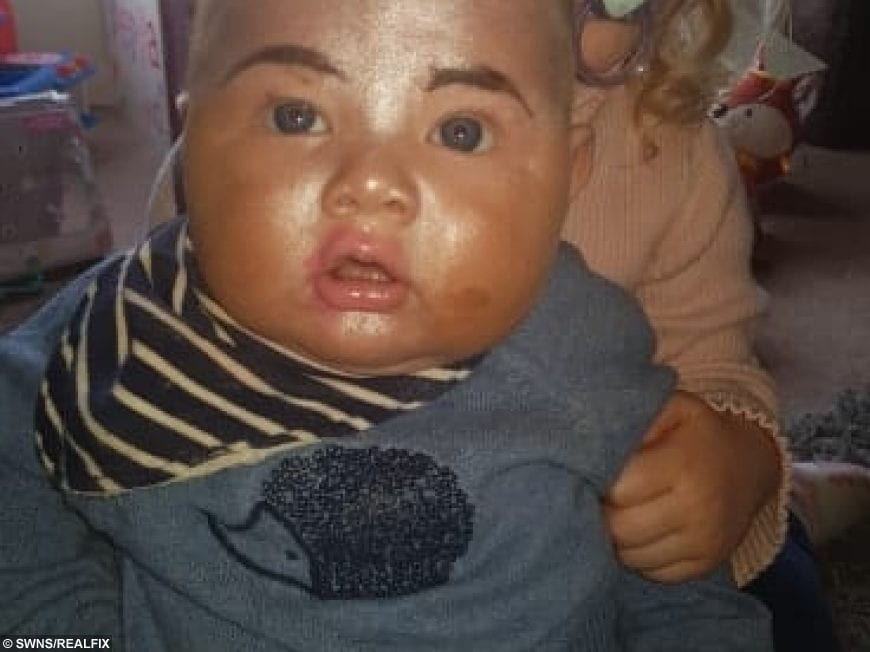 Juggling a load of laundry, I tried to pile it all into the machine whilst soothing my baby, Frankie, five months, who was screaming his head off on the other side of the room.

‘Waaaah,’ he bellowed, desperate for attention.

Stopping what I was doing I went to pick him up out of his baby bouncer.

He immediately stopped balling and began to calm down, eyes drooping.

‘He must just be tired,’ I thought to myself.

I rocked him gently off to sleep – glancing around at the state the house was in.

It was a right tip.

Noticing that my little girl, Tiffany, five, was happily engrossed in her afternoon kids programme I thought of a sneaky plan.

‘I’ll pop Frankie down in his cot beside her while he has a nap and that way I’ll have a quick five minutes for some chores,’ I thought, pleased at my ingenuity.

A few minutes later, I’d not heard a peep out of either of them, just the occasional giggle from Tiffany.

Revelling in the peace and quiet I even found time to tidy the bedroom and do some dusting.

Just as I was flicking the kettle on before going to check on the kids I heard Tiffany chuckling again.

‘What is so funny?’ I wondered, intrigued.

She was a hilarious little madam at the best of times but I’d not heard her laugh like this before.

Just at that moment I heard her squeaky little voice call out to me.

‘Mummy, come and look!’ she sounded excited but still my heart sank.

Images of indelible ink all over the walls or Frankie dangling by his legs, flooded my mind.

Rushing to the living room, I was not prepared for what I was about to see…

My make-up bag was strewn open on the carpet with all my favourite products lying around her.

Frankie was covered in dark make up, complete with lip gloss, and ‘scouse’ brows.

‘Look! Frankie looks like you mummy!’ she said, pointing to his heavily made up and bright orange face.

After being momentarily offended, because he looked horrendous, I burst into a fit of laughter.

His innocent little face – all covered in layers of expensive highlighter and thick eyebrow pencil – was hilarious.

He looked liked he’d come straight off the set of TOWIE!

She’d also caked him in lipstick and bronzer.

The fact that Tiffany was looking so pleased with herself made me laugh even harder.

It took me a little while to compose myself.

‘That’s mummy’s expensive make up!’ I told her, still chuckling, her as I gathered up my products.

Frankie looked perfectly chilled and seemed unaware of how crazy his sister had made him look.

She seemed so proud of her handy work and kept insisting that it looked just like me.

‘It’s you mum,’ she kept repeating.

‘I can’t see it myself to be honest darling!’ I said, rolling my eyes theatrically.

I thought about maybe explaining to her that it was naughty to touch mummy’s expensive make-up, but she was just too funny.

‘You’re a crazy girl aren’t you misses!’ I said, bending down to tickle her.

Giggling away, she rushed off to cause mayhem elsewhere.

‘Right Mr…or should I say Mrs, let’s get you cleaned up!’ I said picking up Frankie and resting him on my hip.

But before I removed all traces of Frankie’s makeover, I decided to pop a quick post up on Facebook.

‘This is too funny not to share!’ I thought.

Finding my most gentle face wipes I gave Frankie a good clean up as he wriggled about.

‘Anyone would like you liked this stuff on your face you cheeky monkey!’ I cooed at him.

Later that night after the kids were safely in bed, I finished the washing up, tidied away the toys, made my self some pasta and then finally flopped into bed.

I decided to quickly check my phone before turning the lights off.

‘What the hell?’ I said out loud to myself.

My phone had tonnes of notifications on the pictures of Frankie that I’d posted.

So many people had commented saying how hilarious it was and it had thousands of likes and shares.

‘We’ve gone viral!’ I said to my mum on the phone.

My friends and family kept ringing me too – they couldn’t believe little Frankie’s make over had caused such a stir.

As much fun as it was I was secretly glad when all the fuss died down.

We quickly returned to normal life as a family of three and I now make sure to keep my make-up bag up high and out of the reach of little arms.

But one thing is for sure, I’ll be certain to teach Tiffany some slightly more subtle makeup techniques when she’s grown up!

« Previous post My Hubby Wore A White Dress On Our Wedding Day - But He's All Man To Me!
Next article » 'I Begged My Mum Not To Let Me Die' - Healthy Mum Left Fighting For Her Life After She Suffered Three Devastating Heart Attacks In A Week - Aged Just THIRTY