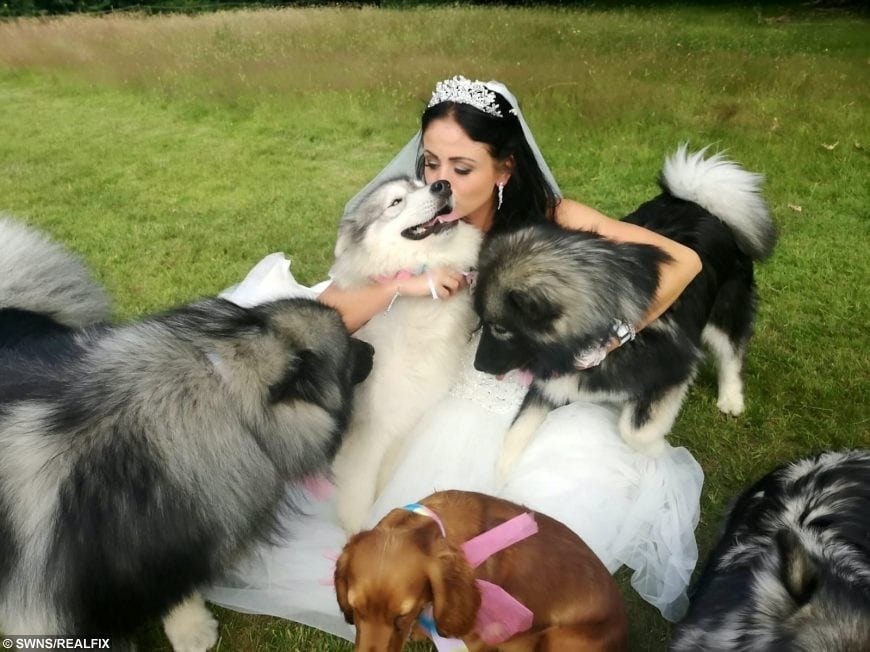 A pair of animal lovers tied the knot with a dozen dogs in their wedding party – including their best man.

Kelly and Billy Bleach’s three-year-old Alaskan Malamute, Zeus, walked up the aisle with a box containing their wedding ring attached to his paw.

Other guests were excused their long faces during the ceremony – because they were HORSES.

Billy, 31, said “give me the ring” and his pooch pawed over the box to him as they said their vows.

Kelly’s father Trevor Smith escorted her and Billy, 31, to the civil ceremony in Sittingbourne, Kent, on horseback.

Each of the six bridesmaids and ushers was partnered with a dog for their big day.

Kelly, 35, runs Karebear Kennels with her husband in Lidsing, Kent, said: “They were very well behaved and it was lovely having them with us.

“We both decided they had to be there. They are my babies.

“He had his actual real person as best man man as well – so it was two best men with Chaz.

“Zeus just walked up with the best and Billy said, ‘give me the ring’ when he needed to and he just put up his paw.

“We did specially train him – they are really clever and he did very well.

“Everyone went, ‘that’s just so cute’. Everyone said it was the best wedding they had ever been to.

“A lot of people have to leave their dogs went they have to go to work but for us we never have to and it’s nice to have them here.”

Kelly rode to the venue, The Dreys in Sittingbourne, Kent, on July 12 on her own horse, Spartacus.

She added: “It was a marvellous day. The animals stayed longer than we thought, especially when they smelled the barbecue, but after a few hours they were taken home.”

The pair met on Plenty of Fish dating website and became a couple in late 2015.

They matched with their love of animals and got engaged while on holiday in Mexico last November.

Kelly said: “From the beginning we knew they would be there at our wedding.

“We were going to take the kittens but decided that was probably too much.

“We were in Mexico and Billy’s mum face-timed us from home and she had just all of them there with banners saying ‘will you marry dad?’.

“Zeus is lovely, he’s really cuddly. All 12 dogs we use in the kennels we use as introducing dogs – they are friendly for the other dogs.”