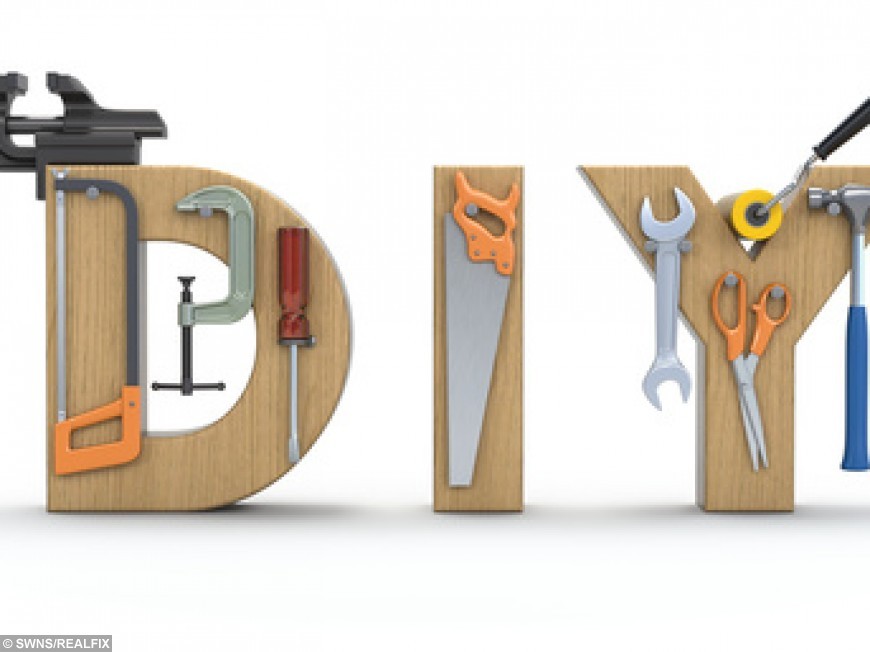 The average Brit needs to spend more than £18,000 and four-and-a-half years working on their home before they can consider it ‘perfect’, a study has found.

Installing a new kitchen and bathroom, laying new carpets or flooring and building a conservatory or an extension are among the top improvements Brits want to do to their home before they will view it as complete.

Less than one in ten homeowners currently consider their home to be perfect with 55 per cent saying they have a long to-do list of improvements and changes they would like to get done.

Painting and wallpapering, buying new furniture and laying decking or a patio in the garden are also among the outstanding jobs for the average British house.

It also emerged that three quarters worry they are never going to get their homes to a point where they are completely happy with them because of a lack of time, money and know-how.

John Ogilvie, Managing Director of Network VEKA, the UK’s most-trusted installer network, which commissioned the research, said: “All of us look forward to the day when our homes are exactly as we want them.

“But it seems there is a long way to go for some – involving plenty of money, dedicating hours of their spare time and perhaps a few DIY mishaps along the way.

“While some of the jobs are fairly minor, it looks like there are many who want to complete some big changes or major work on their home before they can see it as perfect.

“Rather than worrying about it and risking a disastrous and possibly expensive mistake, getting in a trusted professional can not only mean the job is completed much quicker, but there is the peace of mind that it will be done to the highest standard required to get towards a perfect home.”

The study, of 2,000 homeowners, found that the average home needs ten improvements and DIY jobs, with owners estimating these will cost £18,038 to complete.

While 36 per cent reckon just a few minor jobs are needed to make their home perfect, 23 per cent admit it is mostly major work preventing them from having a perfect abode.

Painting rooms is the most common home improvement Brits want to do, followed by re-fitting the kitchen, laying new carpet and getting a new bathroom or toilet suite.

New furniture, landscaping or changing the garden, and converting the loft are also among the top ten.

Other tasks on the perfect home wish-list include installing double glazing, fitting underfloor heating and adding an ensuite bathroom or toilet.

But more than half worry a lack of money will stop them from ever getting their perfect home, while another 28 per cent say it needs a professional in order to do the things they want.

Others believe there will probably always be an improvement they want to complete on their home or say a lack of time is stopping them from getting everything done.

For some, their own partner is the problem, with 41 per cent admitting they often argue with their other half about what they want to do to their home, whether to get a professional in or attempt it themselves, and which home improvement to prioritise.

Other rows erupt over affordability of home improvements, wallpaper designs and what furniture to buy.

The study also found that a brave 15 per cent of Brits attempt all DIY work themselves, with the average homeowner spending 14 days each year working on some kind of home improvement project.

On top of that, over half spend an average of 10 hours a month looking at magazines and property sites in search of home inspiration.

But 16 per cent admit they always get a professional in, regardless of how big or small the job is.

More than a fifth call in a professional to put wallpaper up, while another 15 per cent get decorators in instead of undertaking a paint-job themselves.

John Ogilvie, from Network VEKA, added: “Whether it’s big or small jobs, it’s clear that we’re a nation in need of some serious improvements at home.

“Many tradesmen have a tarnished reputation and are known for being unreliable, the cause of many home improvement blunders and an expensive alternative to DIY.

“However, finding the right one can make the difference between disaster DIY and creating a dream home.”

Network VEKA was established 20 years ago and is the UK’s most-trusted installer network.

The network was first launched in 1996 to fill a very specific gap in the market – to offer hard-working companies a way to prove their commitment to quality, while also protecting the consumer from unknown installation companies and unscrupulous, door-to-door, double glazing salespeople.

With a white glove service of care, knowledge and attention to detail, it’s this element that creates a point of difference for Network VEKA above and beyond the other brands out there.

Installers must request to be part of the Network VEKA scheme and are thoroughly vetted on an ongoing basis from their financial records, to customer service history and the quality of their workmanship. It is an exclusive scheme and membership is highly sought-after.

Top ten reasons why our house will never be perfect

1. We’ll never have enough money
2. It needs professional work
3. There will always be something we want to do on our home
4. It’s an ongoing project
5. We don’t have the time
6. The things that need doing are too big/much for us to do
7. We can’t do what we want in our current home so would need to move
8. We don’t plan to stay here forever so it seems pointless trying to get it perfect
9. We’ve always got something else which is a bigger priority
10. We don’t have the motivation to do it anymore
ENDS