HomeBizarreCuteFamiliesThis was no bog standard delivery! The mum who found her baby down the toilet 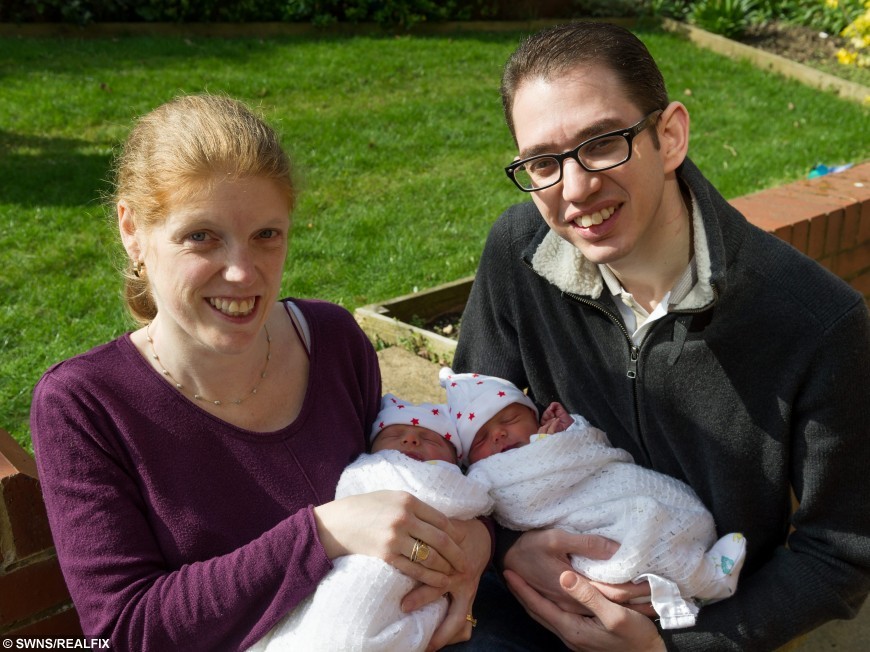 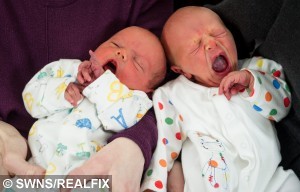 Cole on the left with his twin brother Jonah

A mum pregnant with twin boys gave birth to both at home when they arrived early – with one popping out on the toilet.

Olivia Abrahams, who has cerebral palsy which affects her ability to walk, was 37 weeks into her pregnancy when she was suddenly desperate for the loo.

She sat on the seat and was stunned when the first baby dropped out and was left dangling from its umbilical cord just above the water.

Shocked Olivia, 36, managed to manoeuvre herself off the seat and crawled to the nearest phone in her bedroom clutching her newborn son.

She rang husband Dean, 41, who had taken their three year-old son Noah to his swimming lesson.

He called an ambulance and paramedics rushed to the house in Shenley, Herts where they cut the umbilical cord and checked the baby over.

They were preparing to take Olivia to hospital an hour later when the second twin suddenly arrived.

Around a dozen medical staff, including three midwives, flocked to the house to make sure all was well.

Olivia and her babies eventually reached hospital where they were all declared healthy and allowed to return home three days later. 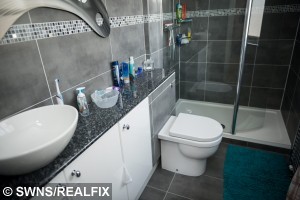 The Abrahams bathroom where baby Jonah was born

Childminder Olivia said: “At the time I thought I just needed the toilet. I pushed and suddenly I was in dire pain, but it wasn’t enough to think I was having a baby.

“I heard a noise and I looked down and there was this baby and he was already crying.

“He was curled up with his bottom touching the water and he kept trying to move.

“I was there for about ten minutes trying to work out how to take him out, it was really scary.

“I picked him up and crawled to get the phone on my knees.

“I laid him on our heated tiles in the bathroom with a towel round him to keep him warm until paramedics came. 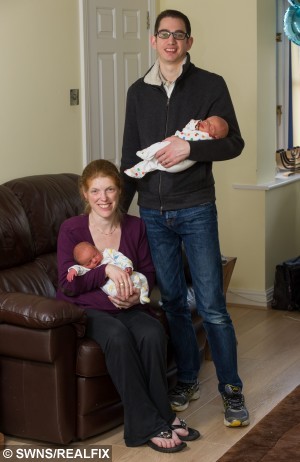 Olivia and her husband Dean with their twin boys

“I was put on the bed and eventually they tried to get me into the ambulance to go to hospital.

“But as I tried I sat back down quickly on the bed and realised the other one was on his way.”

She added: “The doctor said I’d been really lucky. If he hadn’t been in a perfect position I would have been in a lot of trouble.

“A doctor said often with twins they need a lot of manipulation to come out as twins are often breech and one can affect the other.”

Dean, a bank project manager, missed the double births and returned home to find it crowded with health workers.

He said: “When I saw the first baby I couldn’t believe it.

“Over the next few minutes more and more people came in including three midwives. It was almost like a pantomime.

He added: “Both babies are fine and eating and sleeping well. Noah has been chatting to them and he enjoys holding them.

“Jonah is bolshie like his big brother but Cole is very quiet, he hardly cries at all.”

« Previous post Agoraphobic finally leaves home after a decade then plunges down manhole
Next article » It's official! Merlin breaks world record with a purr as loud as a lion