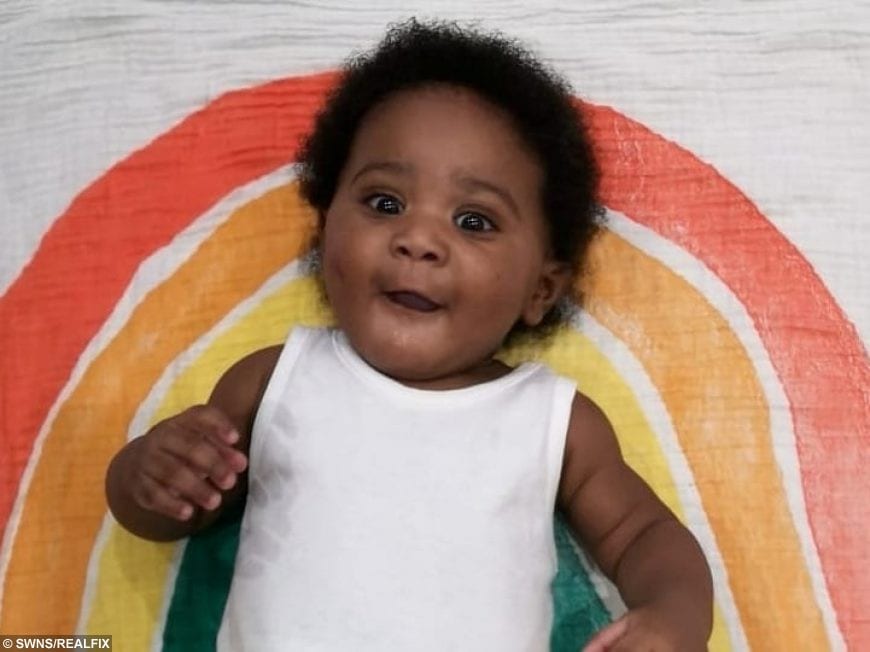 A mum who endured two miscarriages on the same date in the same hospital room one year apart has finally given birth to a ‘miracle’ rainbow baby.

Katie Bonful, 31, went through years of heartache before she finally gave birth to her son, Maximus, now seven months old.

Mum-of-one Katie miscarried her first baby after experiencing some heavily bleeding during her second trimester on March 9 2017.

She fell pregnant again, but went into early labour and miscarried in the same hospital room at St Thomas, Westminster, on March 9 2018.

Katie fell pregnant for a third time in August 2018 and had a high chance of premature labour so had weekly check-ups until she went into labour at 38 weeks.

She gave birth to healthy 6lb 13oz boy and Katie and partner, Richard, 33, said rainbow baby Maximus is a ‘miracle’.

Katie, an admissions officer, from Dartford, Kent, said: “Going through a miscarriage once is heart-breaking enough, let alone twice.

“I couldn’t believe it when I was in the same room twice, going through the same thing again on exactly the same date but one year on – it was like a nasty déjà vu.

“It was devastating but when I fell pregnant with Maximus I had some hope again.

“When he was born, I couldn’t believe he was actually here but I still felt worried.

“I just wanted to hear him cry and when he did I was screaming for joy – I was so happy. He’s my little miracle.”

Katie and husband Richard, head of maths at a school, couldn’t wait to start a family and were overjoyed when she fell pregnant in November 2016.

Everything seemed fine at the 12 week scan but Katie grew concerned when she started getting cramping and bleeding just before her 17 week check-up.

Doctors broke the devastating news that the baby was unlikely to survive and Katie went into labour – giving birth to a ‘lifeless baby boy’ at St Thomas Hospital on March 9 2017.

Katie said: “My husband and I had been married for around four years and ready to start trying for a family.

“Suddenly I started bleeding everywhere – the whole cubicle was covered in blood. I was completely devastated and I felt numb.

“I was so excited and had just started telling people I was pregnant. Nothing can prepare you for losing a child and we grieved for a long time.”

Katie fell pregnant again at the end of 2017 and tragedy struck for a second time when she went into early labour again at just over 17 weeks.

She lost her second child, in the same hospital room at St Thomas Hospital, on the exact same date, one year later, on March 9 2018.

She said: “The second time I was getting ready for work and I felt strange. I thought the baby was having a growth spurt.

“It felt like I needed a wee – like a pressure down there – so after work I went to the hospital.

“They scanned me saw that my cervix had opened at the fluid around the baby had started to flow out.

“They said the baby was unlikely to survive.

“They contemplated to an emergency stitch but only if the pain and bleeding stopped but it didn’t.

“I was in labour for about eight hours and my second son arrived stillborn. I couldn’t believe when it started happening again.

“I thought I’d know what it felt like, but was different to the first time so I had no idea.

“This time I was 17 weeks and five days along and it fell on the exact same date that I’d miscarried the year before.

“Not only that but I was in the same hospital room and the nurses even recognised me.”

The cautious mum fell pregnant for a third time in September 2018 and doctors closely monitored her throughout the pregnancy.

As there was a chance of miscarrying again, they performed a cervical stitch, a treatment to stop the cervix from opening too early during pregnancy.

She said: “After the second miscarriage my husband and I prayed for another child and said: ‘this time next year, we’ll have our little boy.’

“Having faith really helped get through such a difficult time.

“The moment Maximus was born I was waiting for him to cry and the second he did I literally screamed in joy.

“It was the most amazing sound I’d ever heard.

“He’s such a little fighter – he was out little ‘rainbow’ baby because he arrived after the storm.

“I started an Instagram about everything I went through and to follow Maximus’ progress, it’s really helped hearing from other mum’s about their loss.

“Finding a community online really helped and gave me the confidence to talk about it.

“It’s scarring and isolating to go through a miscarriage but there are other people who have been through it too.

“I hope sharing my story can help others and encourage not to suffer in silence.”

« Previous post 'He Wanted To Kill Me, I Could See It In His Eyes' - Domestic Violence Victim Speaks Out After Ex-Partner Was Jailed For Horrific Attack
Next article » Parents Of Five-Year-Old Oscar Saxelby-Lee Shocked After Evil Fraudsters Target Their Facebook Fundraising Page