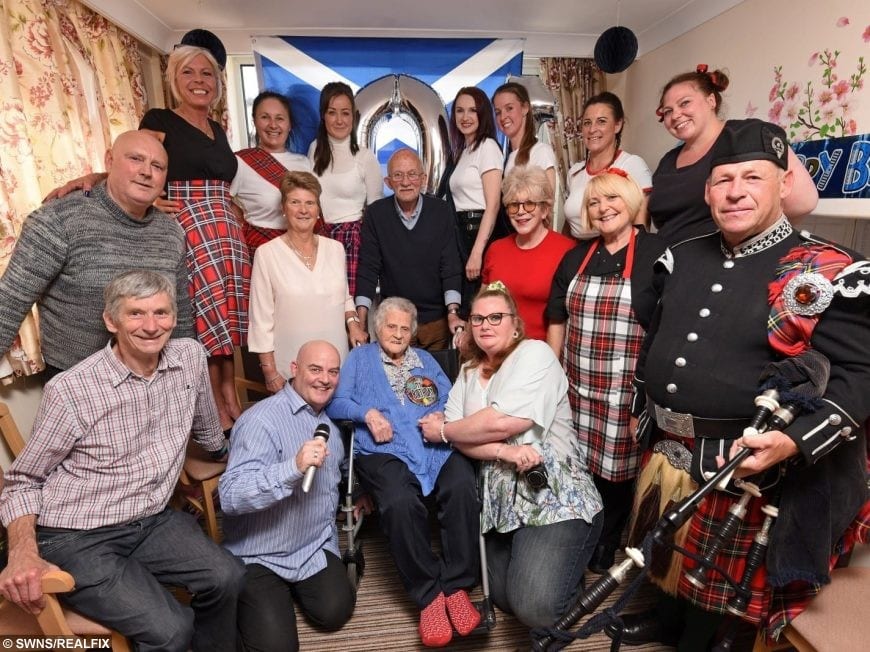 A great-great-gran living down south celebrated her 101st birthday party with bagpipes and tartan dress code in a nod to her Scots heritage.

Betty Charnley was joined by five generations of her family at the care home where she lives in Lytham St Annes, Lancashire.

In a nod to her Scottish roots, a bagpiper played Betty ‘Happy Birthday‘, and a singer performed traditional songs.

Staff at the Royal Care Home decorated it with the Saltire, and dressed in tartan for the special occasion on August 20.

Proud son Keith, 73, said his mum was moved to hears when she heard the piper.

“She kept clapping her hands.

“She was touched by it all.

“She even cried and kissed the piper’s hand to say thank you.

“There was also a singer who sang traditional Scottish songs.

“It was so nice for us all to see her so happy.

“It was the best day we could have with her.

“Mum is so amazing. She is so determined.

“She always said to us if you give her a bar of chocolate then she can move mountains.

“She lets nothing in life defeat her.

“If you say you can’t do something, she always says you can.”

Betty was born in Liverpool in 1918 and worked as a seamstress before taking up a job as an ambulance driver during the Second World War.


She lets nothing in life defeat her.

In July, Betty was hospitalised with sepsis – and Keith wasn’t sure his mum would see her 101st birthday.

But her mother, Mary, also lived until the aged of 99 – and Keith is hopeful that longevity runs in the family.

Keith said: “I didn’t think she was going to make it.

“My mum shocked all the doctors, they were all surprised.

“Her determination is incredible.

“We are lucky that we live for so long in our family.

“It looks like I will have plenty of time to do what I want – well, I hope so.”