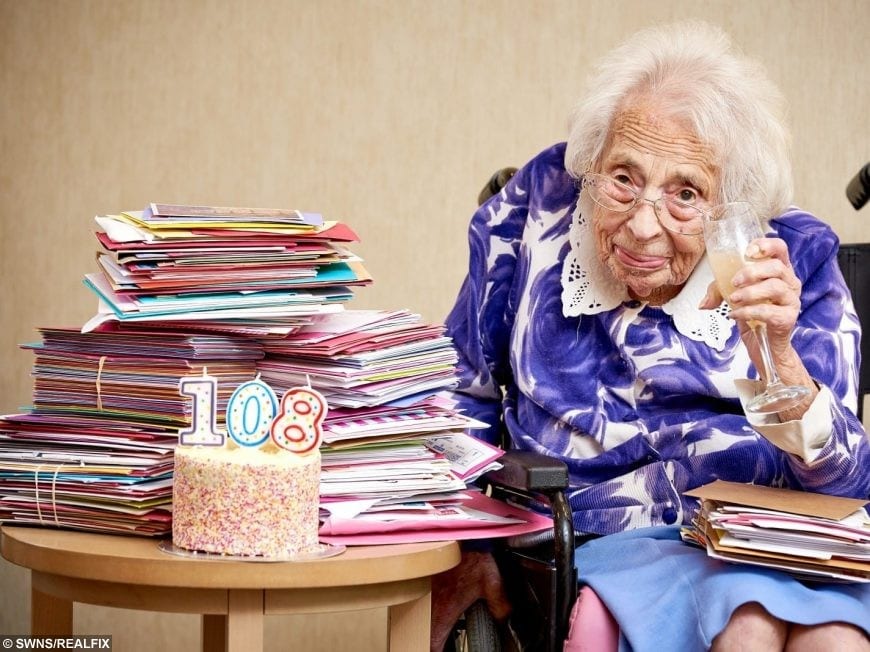 An OAP was overjoyed to get a staggering 654 cards on her 108th birthday after care home staff appealed to people to send her one for every year of her long life.

Dorothy Flowers was overwhelmed with the response which saw her receive scores of cards from well-wishers from all over the world.

The birthday girl, who says the secret to long life is quaffing champagne and following horse racing, celebrated her milestone on Tuesday 23rd Oct.

Staff at the Bupa-owned Southlands Care Home, Harrogate, N Yorks., made the appeal ahead of her birthday and were astounded by the response.

The greetings came from as far afield as Almeria in southern Spain, Bangkok, Las Vegas, New York and Australia.

Dorothy also received a gift from Harrogate’s famous Bettys tearooms saying: “From one centenarian to another”.

She also received some Slingsby Gin, chocolate and multiple bottles of champagne.

Resident manager Helene Ballinger said: “Dorothy loves company, so she’ll sit with us at the reception desk each day.

“She’s such a regular that she’s got her own drawer, which we keep full of chocolate buttons.

“Her real secret for longevity though has to be champagne.

“It’s the only thing we ever see her finish a glass of.

“Needless to say, we’ve been toasting her birthday.”

Born in Headingly, Leeds, West Yorks., on October 22 1911, Dorothy was one of two children to publicans Frank and Fanny Wingate and grew up in the city with her younger brother, Norman.

As a child she attended the Leeds Girls Modern School before leaving aged 14 to pursue a career as an accountant.

It was whilst training for the career that she met her husband-to-be, fellow accountant Leonard, before joining him in working for the Racecourse Betting Control Board – commonly known as The Tote.

In a bid to keep national morale high during the Second World War, horse racing becoming one of the few national sports which wasn’t completely suspended, and the couple moved to London to support races across the country.

After the war, they moved with their jobs to New Malden in Surrey, before they retired to Torbay in Devon in 1963.

Though the pair were married for nearly 40 years, until Leonard passed away in 1981, they never had children.

Instead, Dorothy remains close with her niece, Judith Barrett, who still visits her regularly today.

After spending fourteen years on her own in Devon – using it as a base to travel both the UK and internationally – Dorothy moved back up north in 1995, settling in Harrogate to be close to Judith.

Speaking about the cards, Judith said: “It’s the small gestures that can make a big difference. We never dreamt that my aunt would receive so many cards.

“While she’s not able speak any more, the smile on her face said it all. It was a wonderful surprise and has helped make her day so special.

“While she’s very independent, she’s always been happiest when surrounded by others, and the cards have made her feel very loved.”