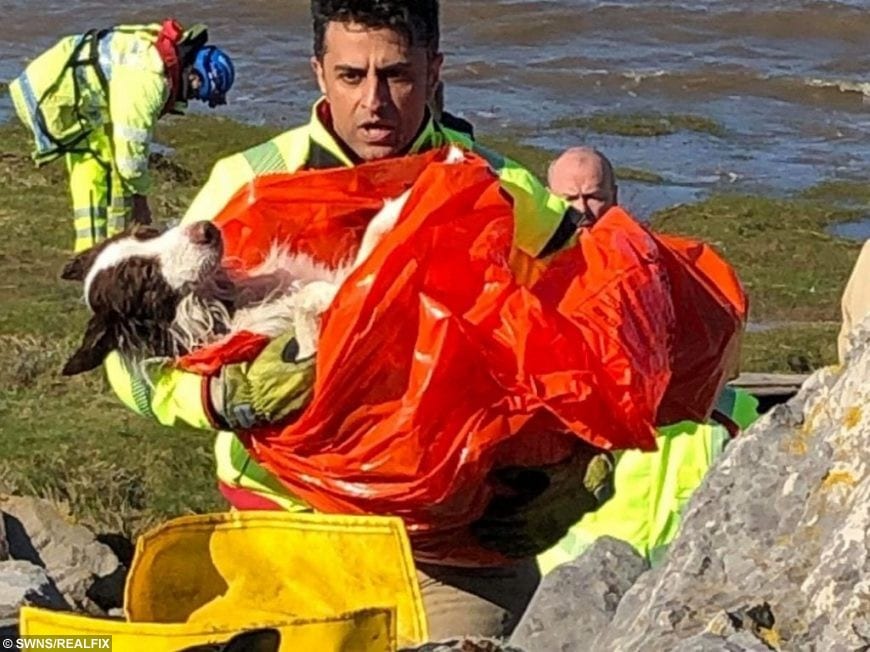 A border collie has been rescued by heroic coastguard volunteers after drifting 400 metres out to sea for an hour and a half.

Red ran away from home on Friday (8 March) and was spotted on a nearby beach the next day before being caught in deep waters as the tide quickly came in.

His owner Sharon Haworth, 42, watched as two volunteers attached to a rope anchored to the shore swam out in a desperate effort to rescue the canine. 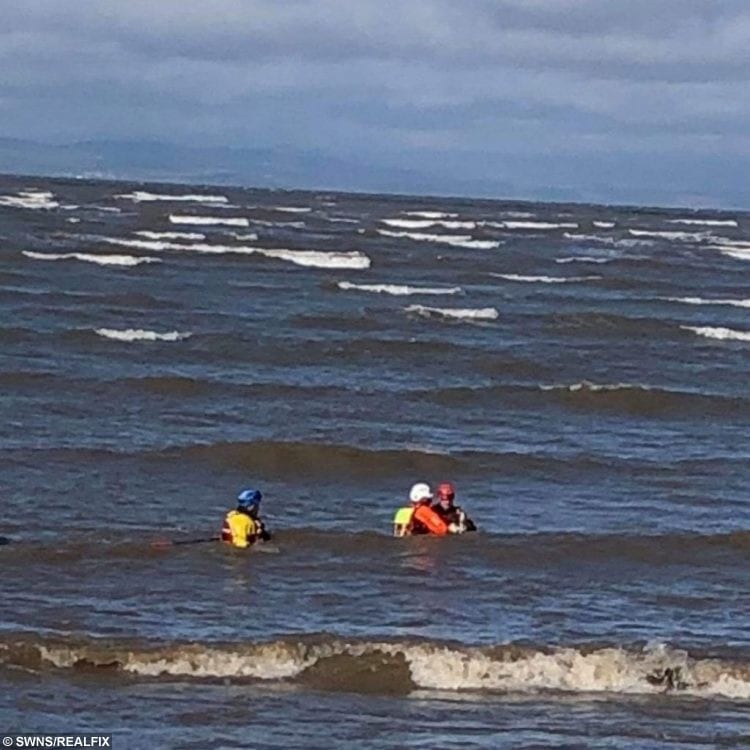 Red being rescued at sea

Miraculously, the three-year-old pooch managed to stay afloat just long enough for the coastguard personnel to reach him and carry him back to shore.

Firefighters then placed an oxygen mask over Red’s muzzle in an attempt to keep him alive before Sharon rushed him to a vet outside Blackpool, Lancs.

Sharon, a farmer, said: “It was horrendous watching Red get taken further and further out to sea.

“In the end I couldn’t even see him. He’s a really lucky boy to have survived because it was very cold and he was out there for such a long time.

“It was still touch and go at the vets, the woman told me that he might not make it.” 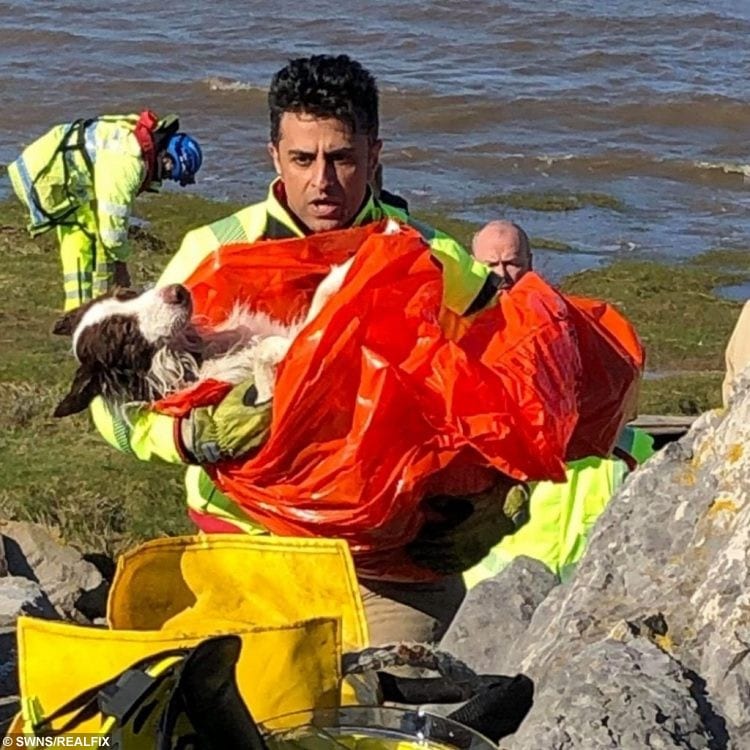 Red after being rescued

She added: “The coastguard were absolutely incredible. For them to take such a big risk to go swim out to sea that far is amazing.

“They saved his life.”

Sharon said when she realised Red had gone missing she spent the whole evening searching for him with her husband Ian.

After posting in a community Facebook group someone got in touch to say they had spotted Red on Knott End beach, a mile and a half from the couple’s home. 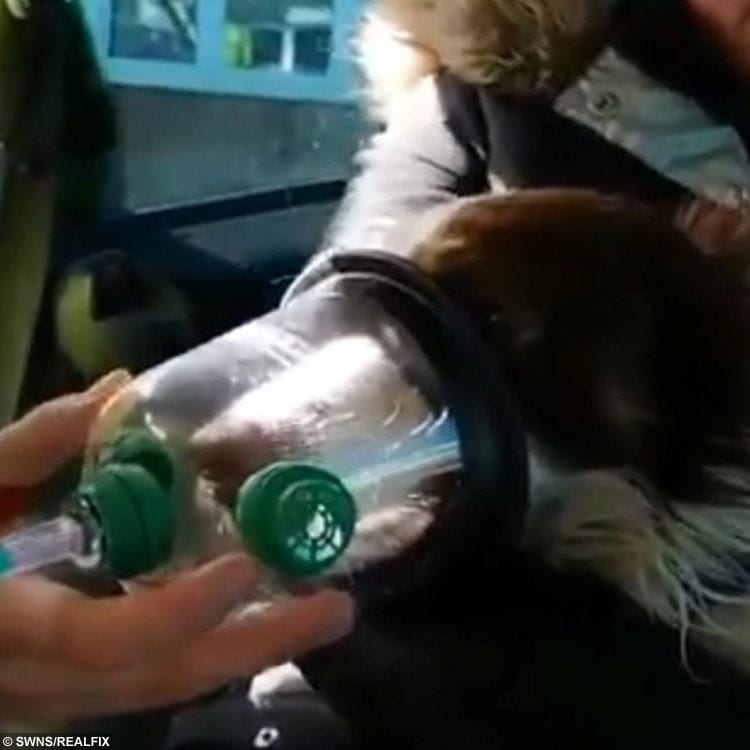 Red getting some much needed oxygen

Sharon went to the beach on Saturday at midday and found her pet but when she approached him he retreated further and further into the sea, before eventually getting dragged out.

Fleetwood and Knott End coastguard teams as well as Lancashire Fire and Rescue Service (LFRS) teams were called to the scene.

The RNLI decided the waves were too big for a lifeboat to attempt a rescue so two coastguard rescue officers wearing dry suits, life jackets and safety lines entered the water.

After being brought back to shore LFRS personnel used an oxygen mask that is usually used on pets rescued from house fires.

Sharon said when they got to the vet Red was placed on heat pads to raise his temperature and given drugs to get rid of the seawater in his lungs.

After four hours he was allowed to return back to his home, which is a horse and cattle farm in the village of Pilling. 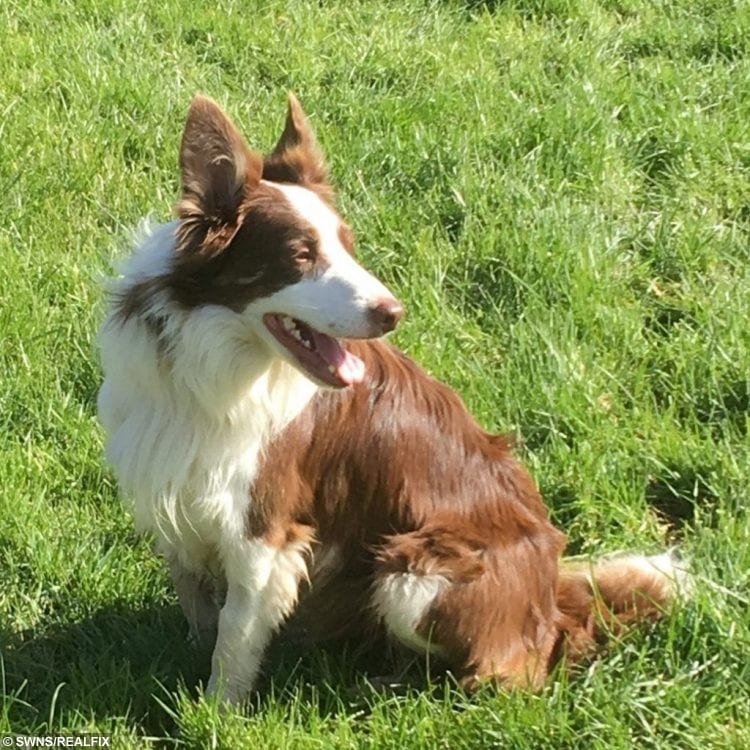 Red is happy to be home!

An LFRS spokesman said: “It was a happy ending for Red and his owners, but with the weather remaining unsettled we are urging dog walkers to stay safe.

“If you are a dog walker, or a runner, please stay away from areas where you could easily be swept away.

“Remain vigilant near beaches or proms or when walking by rivers where water may have risen.

“If an incident does occur we urge you not to attempt rescuing your pet.

“As distressing as this may be for you, it could make the situation worse and you could also get into difficulty.”