by RealFix
in General, Most Popular, Relationships
0

A delivery firm has apologised to a bride-to-be whose wedding dress was stolen after a bungling courier dumped it on her doorstep.

Reverend Jan Atkins, 67, bought the £275 gown online and arranged to have it delivered to her home by couriers Yodel.

But she received a text to say it had been dropped off when no-one was around – before it was swiped by “rotten” thieves.

Jan said: “I got a text from Yodel at about a quarter past three – when I was out at bowls and then I went to Cambridge to see my partner’s daughter.”

Yodel’s message to Jan was said that her package had been delivered, which she found surprising considering she was not home to collect it.

She said: “When I got back just after sixish, there wasn’t a parcel there, so I went and checked with the neighbours.

“One said they saw a parcel propped up outside my door — and that just isn’t a safe place to leave a parcel — at around 5pm, so it would have been stolen sometime after that.”

The retired church minister, who now trains local preachers, had no choice but to shop for her dress online as she was recovering from a broken ankle.

She picked out a “distinctive” pink, calf-length dress worth £275 from online store JJ’s House, which boasted a princess neckline, A-line cut, tulle skirt and bow at the waist.

After contacting the online retailer, was told she would have to wait ten days for them to investigate the incident – leaving her in limbo and without a dress.

Jan said: “I’m concerned about alerting people to the fact that driver people shouldn’t just leave things lying outside – and some people are just looking for these things to come and steal them.

“I’m looking forward to the wedding though, fortunately I am able to get over things quite easily – some people would be absolutely devastated.

“It was very upsetting at the time – it’s just a rotten thing for someone to steal anything but especially a wedding dress.

“You’d think that somebody might have returned it once they opened it and saw what it was.

“The police think they could have just thrown it in the bin, although they told me to put a post online in case anyone sees it in a shop or on eBay or something.”

Jan, who worked as a social worker prior to her 15-year-long career as a reverend, is due to marry her fiance Peter Snow, 72, on April 14.

The couple met online in September 2016 and set a date for their wedding last June – but Jan says they had known they wanted to get married from as early as January.

Jan said: “I think we were both lonely really and looking for friendship, but things just clicked.”

Though saddened, the soon-to-be bride still hopes that the thieves might see the error of their ways and think twice before committing a similar crime in the future.

She said: “I would say to the person who took it that you should think about what you’re doing.

“You’re not just stealing from some faceless organisation – although that’s still bad – you’re stealing from real people with real lives and feelings.”

After being approached for comment, Yodel has now been in contact with Rev Jan to promise a refund. 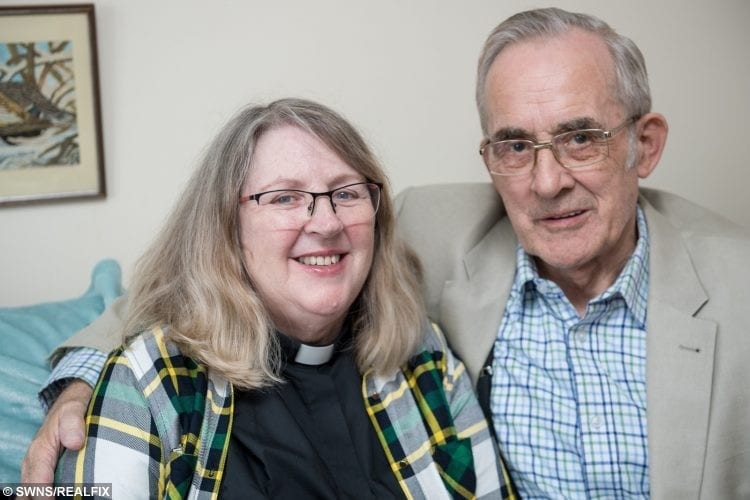 Jan added: “Yodel apologised for the poor service but they then told us to go to the supplier to claim the money back, which we already had.

“In the meantime I’ve bought a new dress. You can’t just sit around waiting for them to make their minds up about what they’re going to do.

“I guess it’s about just putting that behind me and moving on, I’m a widow I’ve worked my way through a lot of bereavement issues.”

In a statement, a Yodel spokeswoman said: “The safe delivery of parcels is our absolute priority and we are disappointed that this driver has broken our strict protocols by leaving the package in an unsecure location.

“We’ve been in touch with Jan to apologise for the inconvenience caused, and to arrange replacement of the item.

“We will be taking appropriate action as this behaviour clearly does not meet the high standards we expect from our Yodel drivers.”

A Hertfordshire Police spokeswoman said: “We are investigating a report of a theft of a parcel from outside a flat in Bishop’s Stortford which took place between 5pm and 6.15pm on February 1.

“The parcel contained a wedding dress. Anyone with information about this crime is asked to contact police via the non-emergency number.”