Meet the real life ‘Kick Ass’ – a ten-year-old British girl who is the best junior kickboxer in the WORLD.

Tiah Ayton took up the martial art four years ago after her parents noticed she enjoyed play fighting with little sister.

Her coaches were instantly impressed and within months she was fighting BOYS who were three years her senior just to get a fair match.

Nicknamed ‘Girl On Fire’ the determined fighter trains six days a week and has already caught the eye of the Team GB Olympic boxing squad.

And while she looks sweet and smiley outside of the ring, impressive videos show her showering her opponents and coaches with super-speedy punch after punch.

At just over 4ft with pigtails flying, the five stone fighter can duck, punch, kick and spin impressively fast, leaving other kids – and adults – looking on in amazement.

She has won more than a dozen title belts and has only been beaten once – on a split decision – by a girl two years older who she later defeated.

Determined to become an Olympic Gold medal-winning boxer – and then a UFC champion – she regularly hits the gym, goes sprint training and weights.

But her family insist she’s “big softie” and when she’s not in the ring loves nothing more than playing with her little sisters Maddie, eight, and Alexi, four.

She said: “I enjoy fighting because I just like getting in the ring and I just enjoy it.

“I train Tuesday and Wednesdays I’ve got circuits and Thursday and Saturdays too.

“If you want to be a champion then you’ve got to train a lot of times.

“If you train you’re best, then you win.” 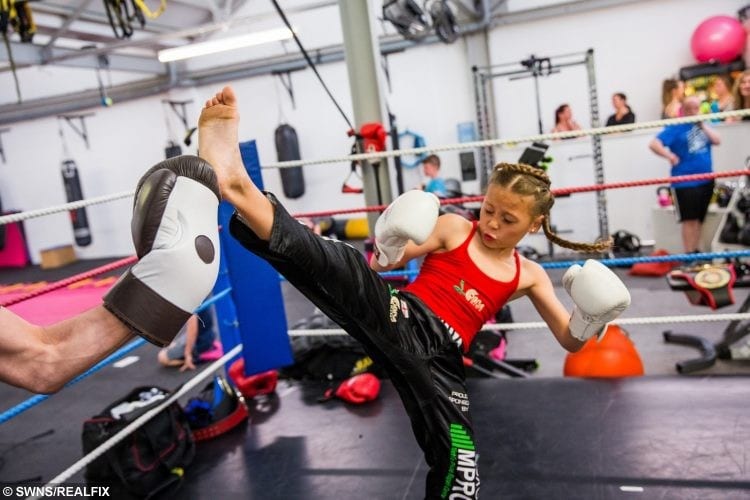 She beat a nine-year-old who was more than half a stone heavier and then went on to win the English and British titles with three different organisations.

Tiah beat the ten-year-old French champ – nearly a stone heavier than her – to become the Five Nations champ in France aged eight.

She fought the best Spanish junior for her first European title, before getting a second when she beat an older Spaniard in another competition.

Six months later she was called to defend one of her European titles against an Irish boxer – and won by unanimous decision.

Just this year she beat the current under 35kg kickboxing World Champion – a Welsh girl who was a year older – to win the global title.

And as a side hobby she took up Muay Thai a year ago – learning it from home using You Tube videos – and won the World Open Championships earlier this year.

On Monday she kickboxes, Tuesday she works one to one with a Muay Thai coach, and Wednesday sees her do conditioning in the gym followed by a circuit class. 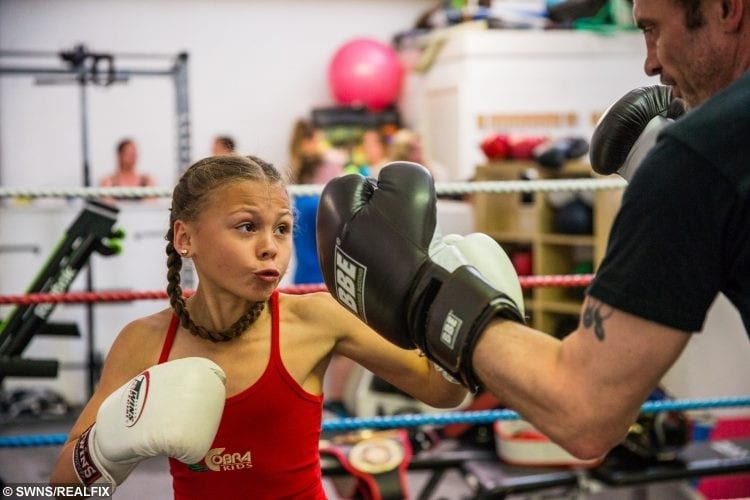 On Thursday she does Jujutsu, Fridays see her do sparring and Saturday she does MMA training followed by hill sprints – and a day off on Sunday.

Her parents Mike, 31, a scaffolder, and Georgia, 27, a college caterer, can’t believe her dedication.

Mum Georgia sits in the audience during her eldest’s fights but can’t look from behind her fingers until its over.

“But Tiah has rematched her since and beat her, so technically she’s unbeaten in kickboxing for the last four years.

“It all sort of started after I was ten minutes late picking her up from her kickboxing class so he started doing pads with her and he said to me ‘she’s special’.

“Obviously we support her, but we don’t push her – it all comes from her.

“She preps her own snacks and stuff to take with her – salami or tuna or something.

“I try to get her to go out and play or whatever but she just loved to train and fight – or watch it on You Tube.

“She’s amazing. I’m not just saying that because she’s my kid.

“But it doesn’t go to her head. Whenever anyone meets her they fall in love with her. She hasn’t got a big head at all.

“She’s a big softie really and really sweet. She will always help out anyone who needs it.

“I don’t worry one bit about her when she gets in the ring. I’ve watched her fight with 43kg boys.

“The stuff she does – the spin kicks – means I have nothing to worry about. She has never been put down. She’s always one step ahead.” 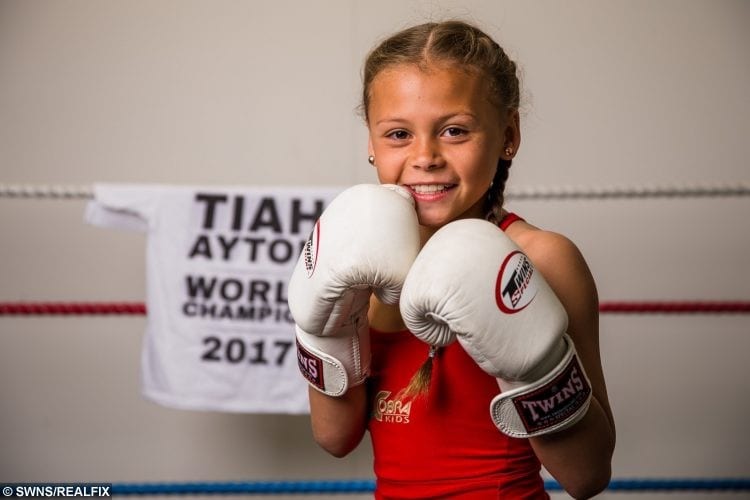 Tiah has been approached by the the English boxing squad, but has decided not to think about joining their official team until she’s older, her dad said.

It would mean she’d have to give up Muy Thai and Jujitsu – and she wants to keep learning different disciplines.

She hopes to become an Olympic Gold medalist in boxing, before moving to America to compete in the Ultimate Fighting Championship.

Mike added: “She looks it all up on the internet and tell me.

“She told me she has looked and if she chooses boxing she can get additional funding.

“She knows what she wants.”