A builder who says he can’t find a landlord who will allow him to move in with his three dogs has decided to live with them instead – in the back of his VAN.

Darren Hicks, 44, has spent an incredible eighteen months living in the back of his Ford Transit van with his pets.

He says he can’t afford £700-a-month plus bills in the sought-after area of the Cotswolds and refuses to give up his beloved pooches to get a council flat.

The tradesman has worked since his teens and spent all his life living in Cirencester, Glos., where sprawling farmhouses regularly sell for £600,000.

Until recently, he shared a modest three-bedroom house with his girlfriend and three Patterdale Terriers in the neighbouring village of Preston.

But the relationship broke down in 2015 and despite still working as a roofer, he couldn’t make ends meet renting a flat for him and the dogs.

Instead, he secretly bought a white van for £600, parked it in a layby and moved into it with Brambles, 17, Bella, seven and Chase, seven.

Eighteen months on, Darren is still there – sleeping on a memory foam mattress, cooking on a camping stove and going to the loo at a nearby Tesco.

He says he’s been stripped of his dignity but despite everything says giving up his dogs is “not an option” – as they’re the only thing he has left.

Darren said: “It is depressing coming home to a van. It is freezing cold and it does get me down, but there’s nothing else I can do.

“I tried to find somewhere to live and spoke to a local charity but the cost of renting privately is atrocious. It’s gone through the roof in the past few years.

“When I used to rent my own place around five years ago it was £500. There is no way I would be able to make that work now.

“The council said that they cannot find me accommodation unless I get rid of my dogs, but if they take them off me they will put them down.

“I would give up everything else. They love me and only do what I say. If I give them up, I know no one will look after them.

“It’s just not an option. They mean everything to me. They’re all I’ve got left.” 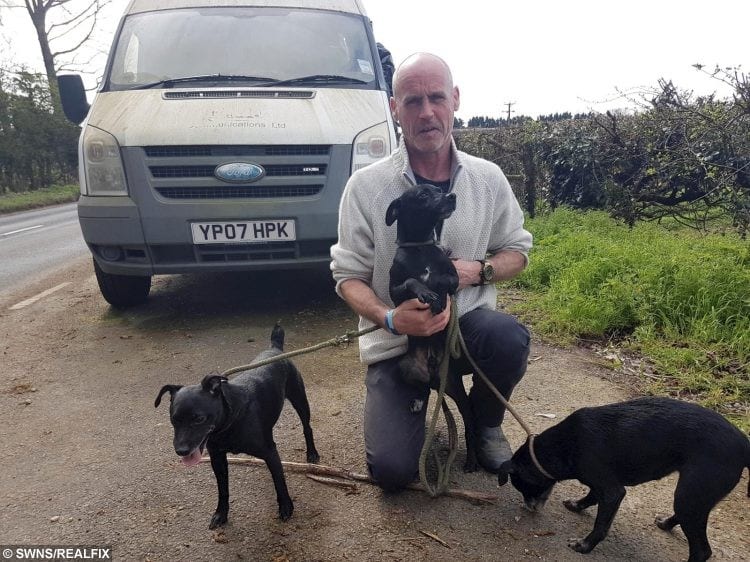 Darren said he can’t stay with his elderly mum as he would be “a burden” and his pals live in council flats, so staying with them could affect their benefits claims.

He added that he doesn’t want to move away from his family and friends.

But no council property landlord – or private landlord with his budget – will let him rent with the dogs.

He said: “I love where I live. I love the Cotswolds and I don’t see why I should have to move. It’s beautiful and there’s so much countryside. It’s my home.

“I think it’s totally wrong that the council won’t help. I have been working my whole life and paying tax. I just think, ‘What’s the point?’

“They said if I had a drug problem they would get me a place. Because I’m a healthy man they said, ‘You’ve got your dogs,’ and left me to it.

“I’m lucky because I got my act together and got a van, but if they took it away from me I would be sleeping a shop doorway.

“It gets me down. You lose all your dignity when you’re sleeping in a van. I have to go to Tesco to go to the loo. It’s degrading but I haven’t got any choice.

“I just want a roof over my head, but I can’t afford one.

“I kept it a secret for ages because I was too embarrassed by it. If I was to find somewhere there wouldn’t be a reason to feel like that any more.”

Cirencester councillor Roly Hughes, who has known Darren for a number of years, described him as “hardworking” and “respectable”.

He said: “Darren is another man on the streets through no fault of his own.

“There are not enough one-bed flats for people and the rents and prices of property in Cirencester and the Cotswolds are forcing people out of the town.”

Cotswold District Council doesn’t own any housing stock so properties are managed by local housing associations, who set out criteria for tenants.

A spokesman said: “The council has to abide by the criteria set by the housing associations that own the available properties.

“Unfortunately we struggle to find suitable temporary accommodation in the area that will agree to take dogs, other than guide dogs or a registered assistance dog.”