Shaun Smith, 52, from Basildon, Essex who has built up a huge collection of Cheryl Cole memorabilia, including books, mugs, posters, signed photographs and as well as blankets, dressing gowns and other items he has had made.

Meet singer Cheryl Cole’s biggest fan – a 51-year-old bachelor who has splashed out an astonishing £7,000 on memorabilia of his idol.

Devoted Shaun Smith insists he isn’t obsessed with the ex-Girls Aloud singer despite spending up to three days at a time scouring the internet for rare pictures of her.

Shaun’s interest in Cheryl, who has now taken her maiden name Tweedy, was sparked eight months ago when his carer showed him the music video for the Girls Aloud song, Sexy! No No No. 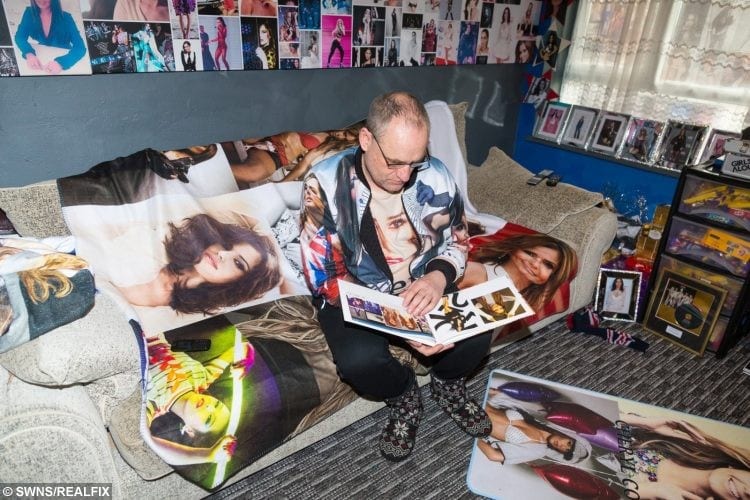 Almost all of Shaun’s house in Basildon, Essex, has been covered in pictures of Cheryl Cole.

His hallway, kitchen, front room and bedroom are all plastered with her face.

He said: “Everyone knows they’ve got to my house because I’ve got pictures of Cheryl in all my windows!”

“Having her everywhere makes me feel very happy and content.

“It’s a pleasure that I’ve got such a superstar in my house.”

After Shaun’s mother died he sold her house and used the money to fund his collection.

He said: “I know she would say she was proud of me for having used the money on something I love.”

“Looking at all my Cheryl Cole stuff makes me think of my mum sometimes.”

Shaun’s biggest wish is to meet Cheryl and take a picture with her.

He said: “My dream would be to meet her. I would be shy but it would be my absolute dream.”

“She doesn’t realise the effect she’s had on me.

“I’m gay and I like that she doesn’t have a problem with gay people.” 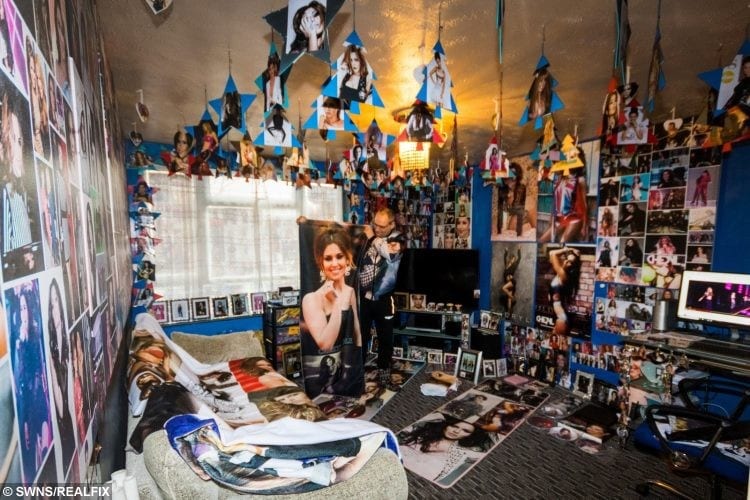 Before Cheryl, Shaun spent £5,000 plastering his house in pictures of actor Harry Reid, who played Ben Mitchell on Eastenders.

Shaun liked Harry because his character was openly gay on Eastenders and that helped him on his own journey with his sexuality.

But Shaun fell out of love with Harry when he took to Twitter to say that Shaun was “weird” and “not all there in the head”.

Shaun said: “That really hurt me.” 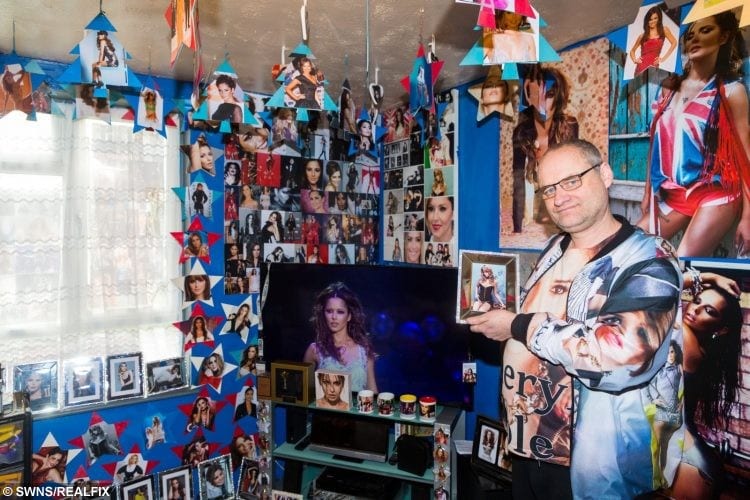 He said: “I’ve got way more Cheryl stuff than I ever had with Harry.

“I gave all his stuff away to charity shops and I find it funny that things I paid £100 for are now being sold for £2.”

Shaun wants to carry on adding to his collection and says he’s “not finished by a long shot”.

He said: “I’d spend £1million on Cheryl Cole stuff if I could.”

“I want people to know I’m not obsessed with her I just think she is fantastic and I just love her for the person she is.”