China Doll Bride: She’s broken every bone in her body but fulfilled a dream to surprise her groom on their special day

Norman and Rebecca Dinsdale on their wedding day. See SWNS story SWBRIDE: A 'China doll' bride who has broken every single bone in her body defied medics who said she would never get out of her wheelchair - to walk down the AISLE. Brave Rebecca Dinsdale, 31, was born with brittle bone disease and doctors said she would never sit up, walk or talk or and would probably pass away before she was two. But Rebecca defied all the odds to survive and endured hundreds of broken bones - triggered by even a SNEEZE - but always used a wheelchair or walking frame to move. However she shocked her now-husband Norman, 35, when she plucked up the strength to walk down the aisle, clinging on to her dad and her best friend.

A ‘China doll’ bride who has broken every single bone in her body defied medics who said she would never get out of her wheelchair – to walk down the aisle. 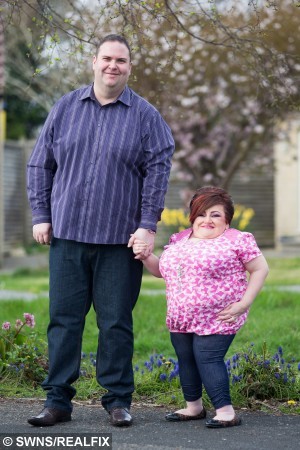 Brave Rebecca Dinsdale, 31, was born with brittle bone disease and doctors said she would never sit up or walk and would probably pass away before she was two.

She has suffered hundreds of broken bones – some even triggered by a SNEEZE – but always used a wheelchair or walking frame to move.

However, she shocked her now-husband Norman, 35, when she plucked up the strength to walk down the aisle, clinging on to her dad and her best friend.

It was the furthest the brave 3ft 7in bride had walked without her zimmer-frame in her entire life.

She then moved her guests to tears when she stood once again for their first dance as man and wife later that day.

Newlywed Rebecca, of from Weston-super-Mare, Somerset, said: “It was such a special day and one that every girl dreams of.

“Walking down the aisle and standing for our first dance left me completely exhausted, but I was desperate to push myself to the limit.

“Norman was expecting me to come down the aisle in my wheelchair, but I wanted to surprise him too.

“I can’t walk by myself, but with my dad and best friend’s help I managed to take a few steps.

“I might have had to disappear for a lie down afterwards, but it was definitely worth it to see the look on Norman and our guests’ faces.

“I was just thankful I didn’t break any bones on my big day.” 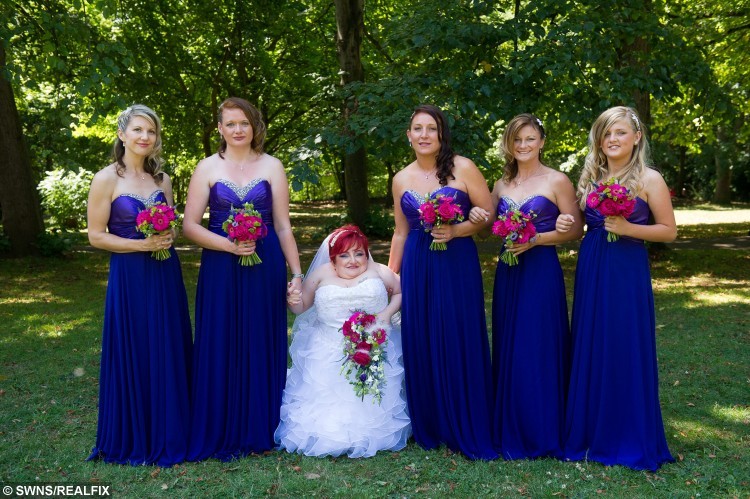 Rebecca was diagnosed with osteogenesis imperfecta when she was just five days old, and doctors discovered all her bones had broken in the womb or during childbirth.

Her parents Patsy and Andrew Dixon were told that she had little chance of surviving childhood, and took her home aged two-and-a-half months to spend time as a family.

Mum Patsy, 61, said: “I knew there was something wrong while I was pregnant.

“I kept telling the doctor I was concerned, but I was just labeled a neurotic mum.

“My bump wasn’t hard or solid, like it had been when I had my sons. It was soft and squidgy like jelly.

“Every single bone in her body was broken when she was born.

“She was as fragile as a china doll.”

Despite being in immense pain and suffering hundreds of breaks and fractures, she never let the condition hold her back and even went to a mainstream school.

She was bullied, pointed at and laughed at in the street, but during her teens she went out clubbing, on shopping trips and holidays abroad.

But brave Rebecca worried her condition might mean she wouldn’t ever get married – until she met IT technician Norman, from Belfast, through MSN Messenger in 2005.

After five years chatting online, the pair fell in love and after Norman proposed in 2011 they tied the knot in in July 2014.

“There was always a little bit of me that thought people wouldn’t want to spend their life with someone disabled,” said Rebecca. 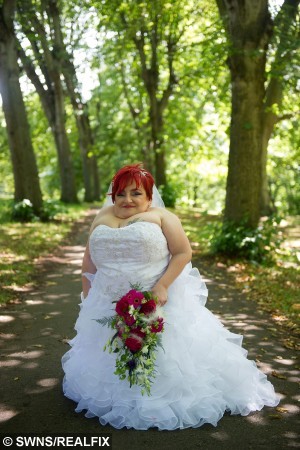 “It’s hard because it’s not just that person, but their disability that they’re taking on and that’s a big thing.

“I’d always dreamed about a wedding, but there was always another bit of me thinking it might not happen.”

Rebecca and Norman wed in St. Martins Church in Worle, followed by a reception at the Royal Hotel in Weston-super-Mare.

“I found a strapless, ruffled dress, which was specially altered to fit me – it had to be torn apart and put back together again,” said Rebecca.

“I felt like a princess in it on the day. I usually use a zimmer frame to go from room to room, or a wheelchair if I go outside, and I can’t go anywhere by myself.

“On my wedding day I wanted to make a special effort and push myself to my limits, despite my bones making me feel like a bubble-wrapped bride.”

“I clung on to my dad and my best friend and managed to take a few steps down the aisle.

“I forced myself. I’ve never stood that long with my walking frame before.

“Every ache and pain was worth it. I was in so much pain as well but I pushed myself to keep going.

“Norman had no idea that I was going to walk towards him. 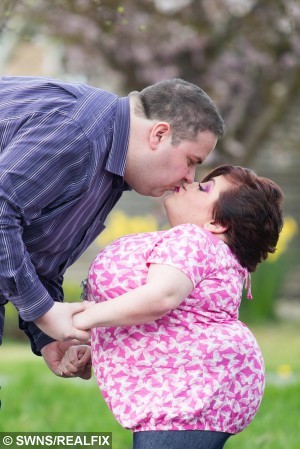 “He was expecting me to come whizzing up to the altar in my wheelchair.

“Then, for our first dance, he held me tightly as I stood up.

“I was determined to do it, even though it was painful and left me completely exhausted.

“We had to disappear for a rest afterwards, but it was well worth it.

“I would have loved to have been able to let go, twirl and lean back like any other bride, but I would never be able to do that.

“Sometimes I feel awful for Norman as I’m not a ‘normal’ wife, but then what is normal?”

Norman added: “It was the most amazing day. I’m so happy to call Becky my wife.

“I don’t see her disability as an issue or as something that affects our relationship. She’s perfect to me.”

Accused of being ‘cruel parents.’ Couple defend their decision to have a baby with facial deformities

‘We won’t give up on him.’ A desperate family’s fight to stay together and save their dying son

'We won't give up on him.' A desperate family's fight to stay together and save their dying son