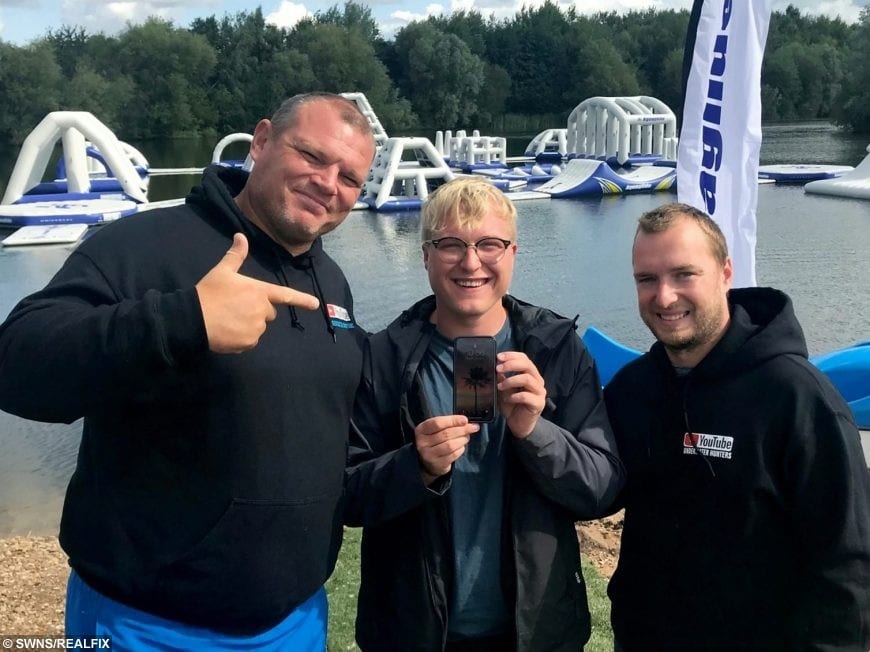 A team of divers reunited a man with his £800 iPhone X after finding it still worked -despite being discovered at the bottom of a LAKE.

Warren Palmer, 44, and stepson Anthony Hanstock, 24, went searching for the mobile phone after a member of staff at a water park lost it last Wednesday (8/8).

The pair spent just 15 minutes with a metal detector before finding the iPhone at a depth of four metres at Spring Lakes Water Park, Long Eaton, Derbys., on Friday (10/8).

They were stunned to discover the phone still worked and were able to reunite it with grateful owner Brad Beech two days after he dropped it while wakeboarding.

Pro diver Warren, who also works as a caterer with wife Shell, 44, said it was “incredible” to see the phone working at the bottom of the lake.

He said: “The park contacted us after one of the employees lost his phone while wakeboarding.

“Anthony and I got our gear, drove down there and dove straight in. The lake was about four meters deep and there was no visibilit at all.

“It was like going under there with your eyes closed, it was pitch black, we took in a metal detector that vibrates in your hand when it finds something.

“It lights up as well but I couldn’t really see the light in the water. We were searching for the phone for about 15 minutes as we knew which area the phone had fallen in.

“I heard Anthony scream in the water so I knew he had found it.

“He pressed the home button and it turned on. The screen lit up and he had a missed call from his granddad. It was amazing that it still worked after two days.

“The employee was so grateful, as his insurance wasn’t helping him.

“They needed the IMEI number off the phone before they could do anything, but he told them the phone was at the bottom of a lake.

“This guy was so grateful he bought us coffee and soft drinks all afternoon as we saved him £800.

“It’s lovely to see people when you help them during a time of stress.”

Warren of Long Eaton, said diving is a hobby for the team and Anthony, a photographer, came up with the idea to post their adventures on YouTube.

Their channel ‘Underwater Hunters’, has over 600 subscribers, with their American Adventure Theme Park dive video racking up over 4,000 views.

Warren added: “Me, Anthony and my wife Shell all dive, we just enjoy it and Anthony came up with the idea to film and put our adventures on YouTube.

“We got some GoPros and it has just taken off from there.

“I’ve always loved water and when I was young my parents moved to Corfu, I learn’t to dive there and loved it ever since.

“The most valuable thing I’ve found is a big remote controlled boat in the American Adventures theme park. It had been at the bottom of that lake for 12 years.”