HomeAnimalsGeneralMust ReadDogs life has transformed after being fitted with bionic legs 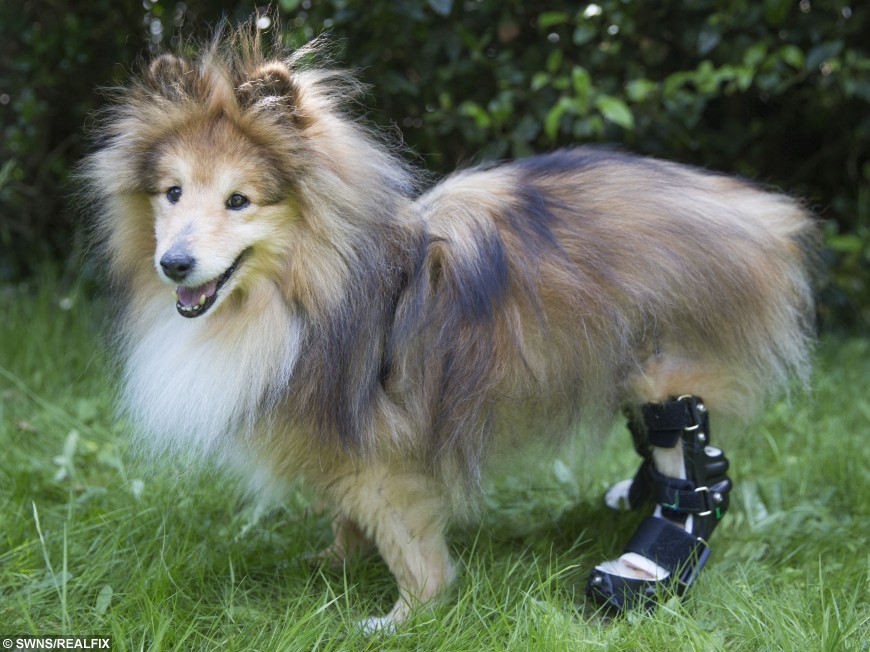 A vet has transformed a poorly dog’s life – by giving him futuristic “robotic” legs so he can walk again.

Robbie, an 11-year-old Shetland sheepdog, had been a regular patient at the vets for five years, suffering from multiple problems including paw injuries, skin tumours and orthopaedic issues.

After painkillers, surgery, antibiotics and hormone replacement failed to give Robbie a sufficient quality of life, owner Sharman Steel, 63, was at her wit’s end.

But now Robbie is Britain’s first official bionic hound, after having his back legs strengthened with a state-of-the-art exoskeleton.

She said: “For various reasons Robbie got Cushing’s disease which can cause muscles to get floppy.

“He had operations on his hind legs which should have been routine operations, but because of the Cushing’s he didn’t heal well, the bones didn’t knit.” 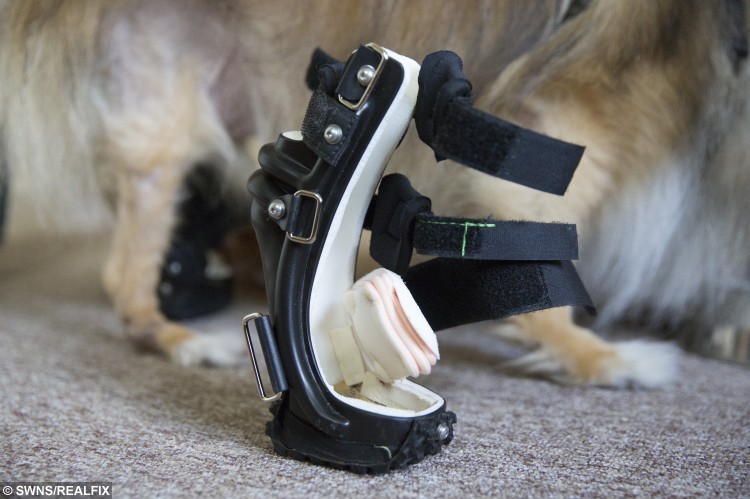 “He could still walk, but it wasn’t very comfortable for him.”

Pete van Dongen, clinical director of Pennard Vets in Sevenoaks, Kent, came to the rescue, by suggesting that Robbie had ‘orthotics’, or orthopaedic braces, fitted.

Now, Robbie the ‘Robo-Dog’ has a new lease of life and can walk safely without causing any damage to his hind legs.

Pete said: “He is no doubt one of very few dogs in the UK, if not the only one, walking with two artificial feet.”

“It’s not quite The Supervet, but very close.”

Robbie’s sci-fi braces were specially made to measure by company OrthoPets UK, which specialises in helping pets with these kinds of conditions. 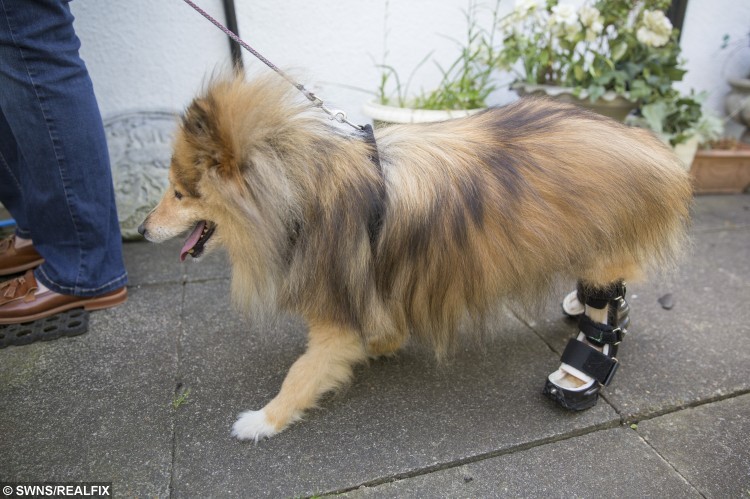 The little dog had to have casts of his legs taken in order to manufacture the precisely fitting orthotics, which were made in the US.

Pete said: “He is now walking well on his legs and he can even sit and lie down and get up again, he seems happy and content.

“He will wear the orthotics whenever he goes out with his mum and little Robbie gets to be ‘Robo-Dog’.”

Sharman, a retired teacher from Chislehurst, south east London, said: “They are more sort of splints, but we call them his boots.

“He’s only just got both of them and he’s doing really well, even with his funny legs he’s still so energetic. 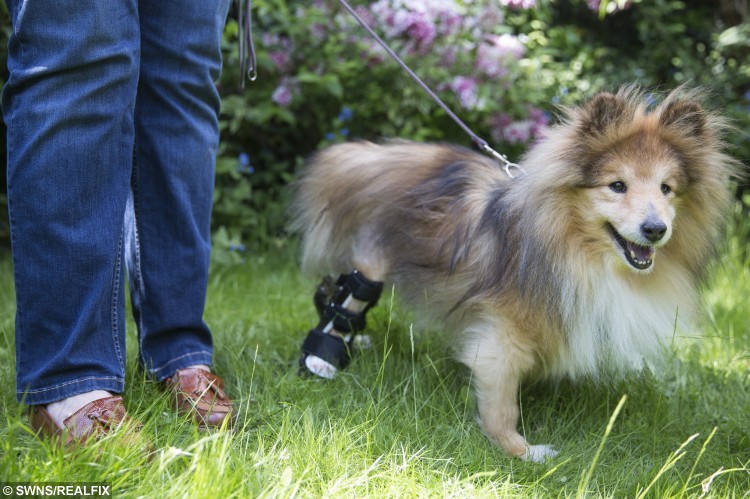 “In fact, had he had them to begin with he wouldn’t have even needed his operation.

“It’s pioneering treatment, and is really good for dogs who have healing problems so it will help loads of dogs – it’s so good I could get this at my normal vet.”

Luckily for Robbie, he is an absolute favourite at the vets, and nurses say he is a true gentlemen.

Sharman said: “They have been absolutely fantastic there at keeping him going, and Pete is brilliant.

“If it wasn’t for him, Robbie would not be with us today. He has worked hard on him to give him a good quality of life.

“It’s a 30-mile round trip and at times we were going every day, even twice a day, but it’s totally worth it.

“The legs cost about £1000 each, but when you compare that to the money we would have to spend on operations it really isn’t a lot, and we have very good insurance.

“It’s definitely worth it to change Robbie’s life for the better,” 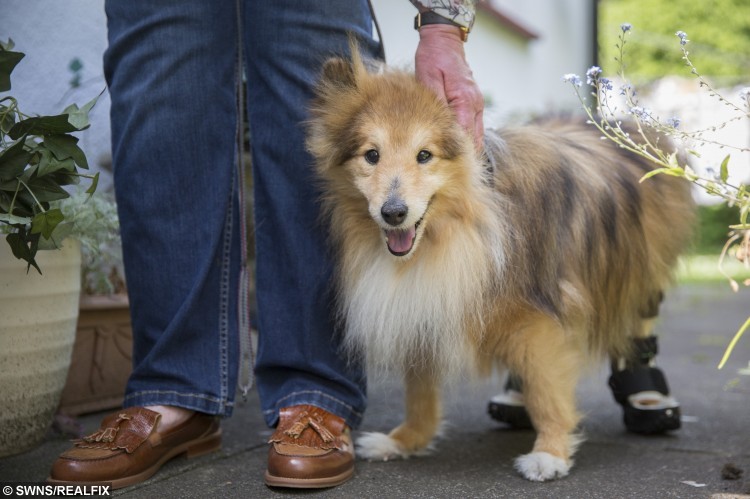 Besotted owner Sharman said Robbie is a “plucky little dog” who has had “the life of Riley” with all the scrapes he has been in, but he “always bounces back”.

She added that Robbie “loves his little boots”, although he is still building up wear at the moment, walking in his boots for about 15 minutes twice a day.

She said: “When he’s pottering about in them he doesn’t even seem to notice he’s wearing them.

“Sometimes when he’s going up and down steps he has a fall but he picks himself up and carries on.”

“He’s a lovely dog, he’s so clever and I think that’s one of the reasons why he’s taken so well to the new legs.”

When he does need a break from his robotic alter-ego, the cute canine has alternative transport in the form of his own pushchair – to take him long distances. A vet has transformed a poorly dog’s life – by giving him futuristic “robotic” legs so he can walk again. 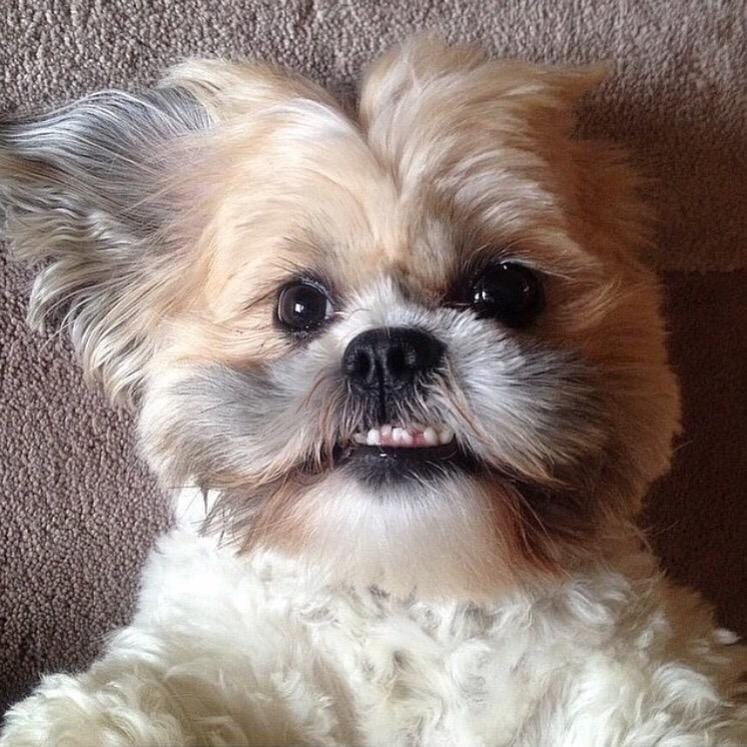