Nissan has unveiled the ultimate workplace for the hipster on the move – an electric van converted into a stunning mobile office with desk, oak flooring and a coffee machine.

The Nissan e-NV200 has been designed as an alternative to the expensive offices that small businesses and self-employed people have to rent.

Commuting currently costs Brits £358 per month and office space in London sets back firms a staggering £16,000 per square metre on an annual basis.

The British arm of the Japanese manufacturer teamed up with design workshop Studio Hardie for the ‘WORKSPACe’.

There are two chrome and leather desk chairs, anchored to the van’s oak flooring on custom mounts.

If the weather is fine, both side sliding doors can be opened, together with the split rear doors, to create a more open working atmosphere.

A clever floating deck can be pulled out at the rear to provide an outdoor area to take phone calls from or take in the surroundings. The backdoor also has brackets for attaching a folding bicycle.

William Hardie, founder of Studio Hardie, said: “We specialise in creating amazing spaces in unexpected places, but we’ve never done anything in an electric vehicle before.

“Given the van’s green credentials we wanted to maximise the space with smart and considered features such as sustainably sourced materials and efficiently-powered technology.

“We believe the future of technology is a return to quality craftsmanship, so we’ve also looked to hone an environment that professionals will really enjoy working in.

“All the comfort and connectivity of a modern office, with a few surprising touches thrown in.”

Between the chairs, which can be used told hold a meeting, is a wooden console containing a wireless charging dock for smartphones, Bluetooth music speaker and a drawer-based mini-fridge. 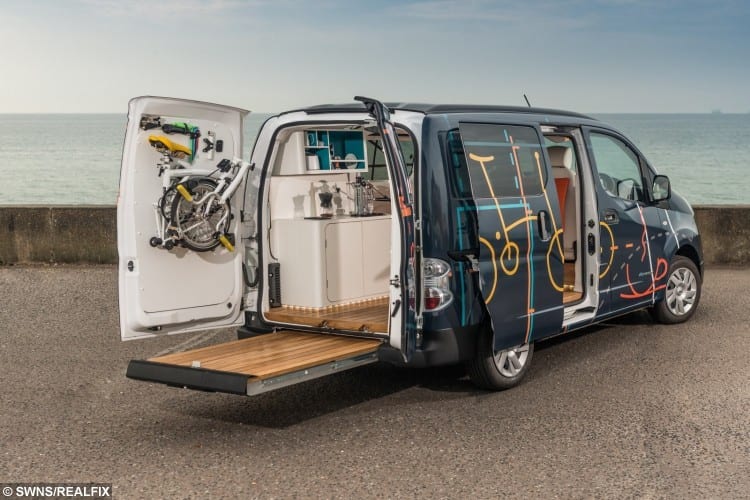 One of the chairs can be moved to a central mounting point, allowing a user to sit at the fold-down desk console, which houses a touch-screen computer, wireless mouse and keyboard and array of stationary supplies, each with its own storage space.

On the other side of the load bay is a console designed for making barista quality coffee.

A barista quality coffee maker rises mechanically from a concealed compartment within the counter with a full array of coffee-making equipment, stored in the overhead locker, for crafting the perfect espresso or cappuccino. 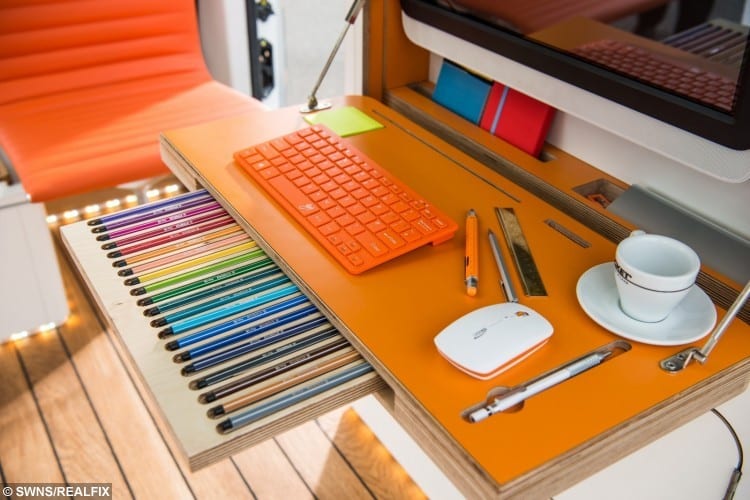 The mobile office is currently a one-off with Nissan refusing to say how much it would cost to build.

Gareth Dunsmore, director of electric vehicles, Nissan Europe, said: “With property prices in our capital cities at such a premium and the modern professional needing to be ever more mobile, businesses will need to think smart and consider what the workplace of the future looks like.

“With hot-desking and remote working on the rise, it is not too big a leap to see a future where our vehicles will become connected, energy efficient, mobile workspaces and the e-NV200 WORKSPACe project could become more than just a concept.”