A five-year-old golf prodigy who hopes to be the next Tiger Woods is getting plenty of practice – after his parents converted their garden into a four-hole course.

Little Zach Wheeler has been obsessed with the sport since getting a set of plastic clubs from his mum and dad when he was just 14 months old.

When he pestered his parents to take him to the driving range every day after pre-school they decided to transform their entire modest back garden into a green.

The mini eight-metre long course behind their semi has four holes, three chipping areas and graded slopes made from Astro Turf.

It cost parents Dean and Gemma £3,500 – but they say their investment at their home in Fareham, Hants. is already paying off.

Zach has become the youngest child to get a golfing scholarship in the UK and can handle a full 18-hole round – even if his dad has to carry him between shots.

His swing is the envy of most adults and he can putt straight into his mum’s washing machine from 6ft away.

Mum Gemma, 32, a beautician, said: “He’s loved golf since almost before he could walk properly – he lives, breathes and sleeps the game. It’s all he thinks about.

“His putting green was a big treat, but if he goes really far then it’s worth it.

“He would come home from pre-school and the first thing he would be asking about would be if he could go to the driving range or golf course.

“He’s straight home from school and if he’s not out on the green, or at the course, he’s in the living room with the golf on TV, with videos on his iPad, practicing his putting across the carpet.” 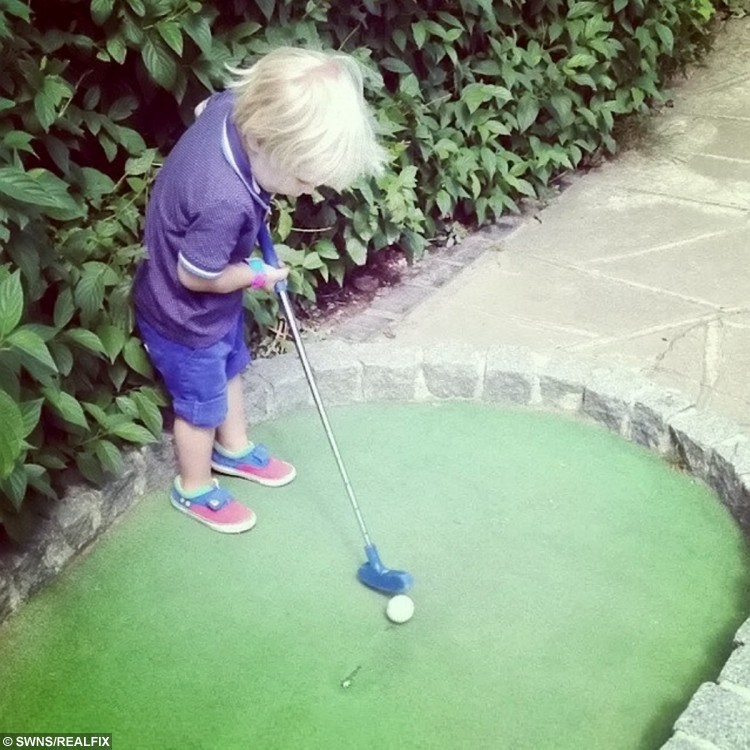 She added: “He has a really powerful swing on him.

“When people see him play they are just in awe at how good he is.

“He wants to be the next Tiger Woods and he says that when he leaves school he wants to go to America and be on TV him Tiger Woods.

“I’d like him to make it in golf and go far and be as good as he can be, but only as long as he enjoys it.”

Zach first got a taste for golf when he got a set of plastic clubs as a baby, but soon got frustrated because they couldn’t hold up to his powerful swing.

Dad Dean, a window cleaner and keen amateur golfer with a handicap of six, then adapted one of his old clubs for Zach at the age of two.

The tot who has a brother Alfie, 12, would go with his dad to the driving range, and when he was spotted by a teacher giving lessons to older kids.

He started the Saturday club aged three – two years younger than the other children – and was soon recruited by a scholarship scheme after head-hunters saw a video of his skills.

He is now tutored by pros at Meon Valley Marriott Hotel & Country Club, one of three clubs he has membership of.

His own back garden green took six weeks to install and the golf-mad lad spends an hour-and-a-half perfecting his chipping and putting skills.

It was ready in July, but he wasn’t able to start using it for a few weeks after he broke his collar bone when he fell over walking the dog.

Zach, who can start competing internationally next year, said: “My favourite thing about golf is that I like being with my dad when we go to the course.

“I’m happy because I have a putting green in my garden now and my dad has to clean all the leaves off. He is my green keeper.”

Zach, whose has golf green wallpaper in his room, added: “My favourite golfer is Tiger Woods because I like his driver.”

His mum has set him up an Instagram page so fans can follow his progress at: @ZACHWHEELER2011

Pensioner, 70, is held by police for ‘pulling up turf’ outside her rented home

Pensioner, 70, is held by police for 'pulling up turf' outside her rented home