Video grab of the fatal moment a paraglider carrying two men snaps in midair above the skies of Kalimpong, West Bengal, India.

This is the horrifying moment a hero pilot saves his passenger after their paraglider SNAPS mid air and they plummet to the ground.

Purushottam Timsina, 22, incredibly managed to save a man from an almost certain death by courageously piloting their broken paraglider to the ground.

He tragically died from his injuries but his heroics in the air meant that his passenger, Gaurav Choudhary, 32, managed to escape with only a broken leg.

The incident happened in Kalimpong, West Bengal, India on November 25.

A video shared by the ‘I love Siliguri’ Facebook page revealed the stunning moment when the joyride turned tragic.

The clip – which hoped to capture the experience of a lifetime – shows Chaudhury screaming with joy as the pair glide towards the ground.

But just seconds later a chord snaps and the paraglider enters a terrifying spin towards the ground. 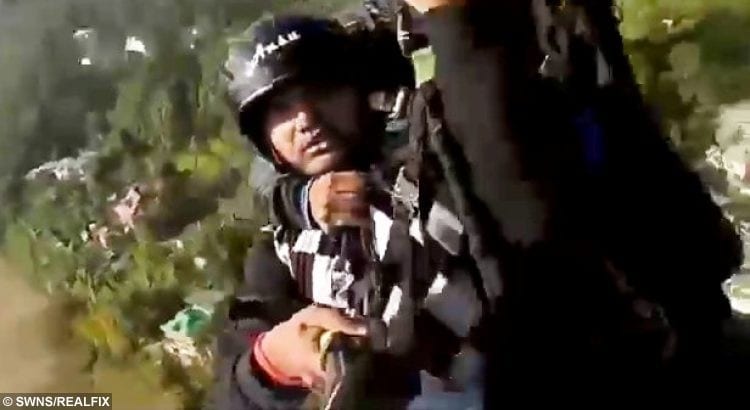 The duo take just seconds to fall hundreds of feet out of the sky as Purushottam desperately tries to hold on to tourist, Gaurav.

They fall on the rooftop of a house and the camera captures the a part of the paraglider still drifting in the sky.

Friends of Choudhary, who had accompanied him to Kalimpong for the trip, filed a complaint with the police.

“Organisers ignored even basic safety measures. The pilot was not even wearing a helmet,” said a friend, who did not want to be identified.

Dhrubajyoti De, Kalimpong police superintendent said: “We are probing the incident and have registered an unnatural death case.”