Ruby Barnes with her little brother Dexter both from Bolton, Lancs., See Ross Parry Copy RPYSAVE : An eight-year-old schoolgirl has been hailed a hero after saving her baby brother from rolling into the road after her mum had an epileptic fit. Quick-thinking Ruby Barnes rushed to grab the pram in which her 22-month-old little brother Dexter was sitting after her mum Ellen Barnes, 28, let go after suffering the seizure on January 26. 4 February 2016.

An eight-year-old schoolgirl has been hailed a hero for saving her baby brother from rolling into the road when her mum collapsed with an epileptic fit.

Ellen was walking to her mother’s house with her two children when she fell ill and Ruby stopped the pram from careering into the road.

The grateful mum said: “I wasn’t feeling well before I picked Ruby up from school.

“I’d been on the bus for about an hour with the baby and I think I might have had a fit on the bus.

“When I got to the school I phoned my mum and told her I wasn’t feeling well and said I’d be coming round to hers.

“I wasn’t that far from my mum’s flat when I collapsed in the street. My arms were up by my chest and my chin.

“Ruby grabbed hold of the pram and managed to stop it running into the road.

“There were people who just walked past and didn’t even ask what was going on.

“All they had to do was to ask Ruby what was going on.

“It was like I was just drunk or something. There was a man on his bike who had watched the whole way through.

“I was on the floor with a pram.

“If I hadn’t had been for Ruby then I don’t know what would have happened to the baby.

“Ruby managed to call my mum and she came running down to help.”

Ellen, who works from home in Bolton Grtr Manchester for an ironing service company, said it was not the first time Ruby had gone to her aid.

She added: “She’s looked after me regularly. I have fits in my sleep and she can hear it and comes to help daddy.

“But I’ve never had a fit like that in the day before and she’s never seen me like that before.

“My dad lives next door so if I have a fit or tell her I feel unwell she usually goes next door and gets granddad for help.

“But she’s always been taught about what to do if I do have a fit but this is the first time she has had to put it in to action.

“It really shocked me how well she managed to cope and how responsible she was because she is only eight.

“If she hadn’t been there her brother would have been in the road.

“As soon as I let go she spotted the pram. She grabbed the pram and brought it back to me and put the break on and waited for my mum to arrive.

“When I fit I normally can speak still but this time I couldn’t move my top half of my body.

“I came round at the side of the road when my mum got to me.” 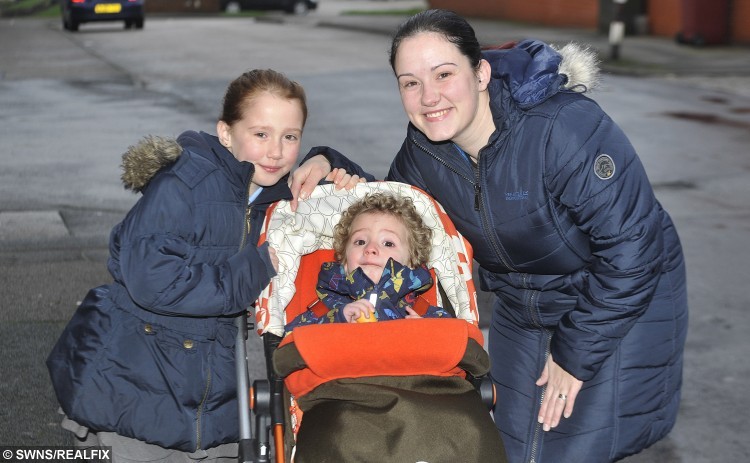 Ellen’s mum Tina Naher, 47, managed to get to her daughter and grandchildren and take them her flat in Bolton.

Ellen, married to engineer Mathew, 38, said: “When I got to my mum’s I asked Ruby if she was all right and she told me she was crying on the inside but didn’t want to show me that she was upset.”

Ruby’s school, Moorgate Primary School in Bolton, has organised a special presentation to reward her for her heroism.

Ellen said: “It is nothing special to her, it is just normal.

“When they gave the presents to her she had no idea it was for her because she didn’t expect it.

“She just thinks that she was just helping me. She is very blasé about it all.

“She has helped me before but not to his extent.”