by RealFix
in Crime, General, Must Read
0

A motorist has slammed hypocritical traffic wardens who slapped him with a ticket – while they were parked on DOUBLE YELLOW LINES.

Adham Malik, 30, was handed the £35 fine after he pulled over on a grass verge to unpack his children’s belongings outside his parent’s home on Sunday (14/5).

But he was left gobsmacked when he noticed the two traffic enforcement officers who had just issued the fixed penalty notice were illegally parked themselves.

Dad-of-two Adham snapped the Birmingham City Council employees pulled up on a grass verge next to double yellow lines and opposite a large “Keep Clear” sign.

The hotel manager said as a result traffic had to drive on the wrong side of the road to get round the wardens’ vehicle on Vicarage Road, in King’s Heath, Birmingham.

He contacted the local authority to complain about the incident – and was stunned to be told the parking wardens could “park where they wanted.”

He said: “I completely hold my hands up for being on double yellow lines and I will pay the fine no problem.

“The issue I have is of the hypocrisy of the parking wardens who were illegally parked themselves while they go around slapping people with tickets.

“Where they were was more of a danger and a hazard to other road users than where I had parked, in my opinion.

“If they are going to be seen to uphold the rules of the road surely they should be parked legally and safely and setting a good example.

“When I phoned the council I could not believe what I was hearing when they told me they could park where they wanted in their line of duty.

“I told them I had no issue with my fixed penalty notice but they should issue the parking wardens with a fine.

“But they were having none of it. I just don’t think it’s right at all.” 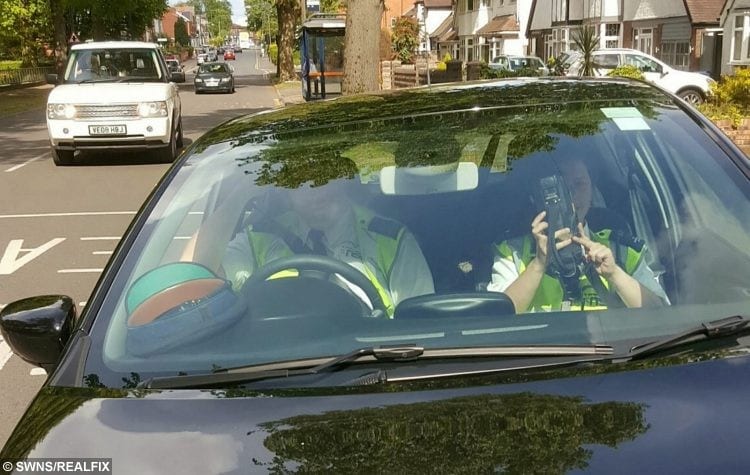 Adham had been unloading the car after he parked up at his parent’s home to show off his newborn Jack, who is two weeks old.

He added: “I don’t make a habit of parking badly, but with two children there is a lot of stuff to unpack so I thought I’d be OK for five minutes leaving the car there.

“But I’m not going to contest the ticket because I was in the wrong – I just want the council to admit they were as well.

“I don’t understand how they can think they have the right to park like that themselves – its hardly sending out a good message is it?

“They were both rude to me and told me to move out of the way of the car and also that I couldn’t take photographs of them.

“I said ‘if you can take pictures of me and my car, than surely I am entitled to do the same?’

“It’s complete double standards and it does not seem right at all.”