HomeEditor's PicksGeneral‘I Might Look Old But I Feel Young And I Still Have A Lot To Give’ – Gran, 71, Is UK’s Oldest PCSO And Has No Plans To Retire 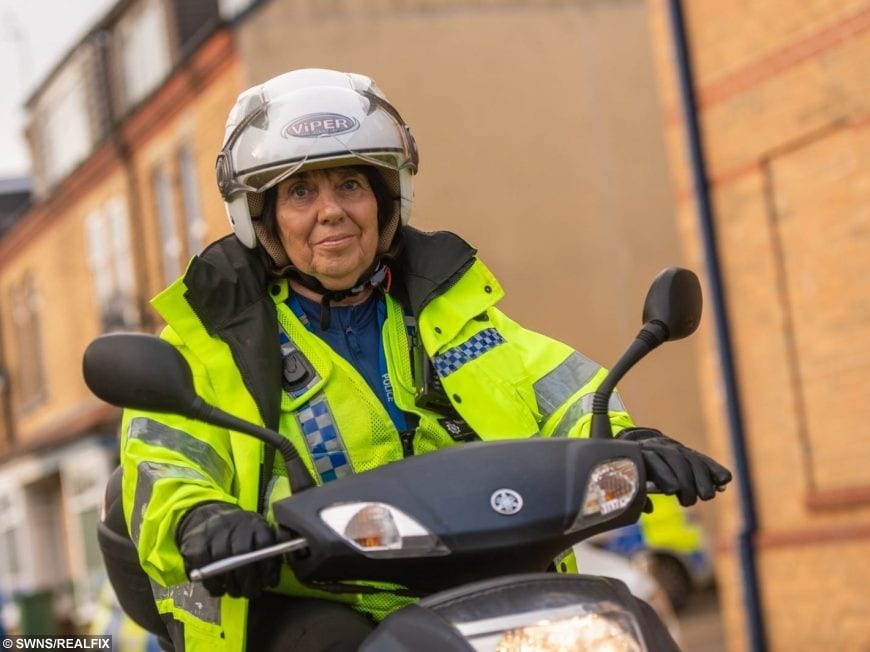 Britain’s oldest PCSO has vowed to carry on pounding the beat for another ten years – at the age of 71.

Sprightly Gran-of-three Liz Smith is six years past retirement age but has no plans to hang up her handcuffs any time soon.

The community support officer from East Yorkshire works an incredible 56 hour week and can be seen patrolling the streets of Bridlington every day.

Liz said: “People ask me when I’m going to retire but the thought of that terrifies me – I love working and I love my job.

“Every day is different and I’m always facing new challenges, which definitely helps to keep me young.

For most of her adult life Liz worked as a secretary but she knew she “always wanted to do more”.

She became a special constable – a volunteer police officer – at the age of 45 but was forced to retire 13 years later, which felt like “being thrown on to the scrap heap”, the mum-of-two said.

Three years later, at the age of 58, she applied to be a PCSO with Humberside Police and was surprised to get the job which is salaried.

“This is the last job I’ll ever have and it’s turned out to be my dream position,” Liz said.

“I absolutely love putting my uniform on, coming down to the station and doing a good days work.

“It’s very fulfilling to get home at the end of the day knowing I’ve served my community.”

Liz, who lives in Flamborough with husband Robert, a 71-year-old retired engineer, has a number of different roles with Humberside Police.

She gives talks to OAPs warning them about the danger of scammers and also visits three different schools to address pupils about personal safety.

Some of Liz’s most challenging assignments involve being called out to domestic disputes, which can range from abuse to petty arguments.

“One of my favourite things about being a PCSO is being in a position to help the vulnerable, whether it be children or the elderly,” Liz said.

“All of the locals here know me and know I am here if they need me any day at any hour – that’s what this job is all about.

“People here say having me around is like the old days when there was a village bobby.

“I’m always getting grabbed for a word by someone or another, which is really nice – I’m more than happy to talk to anyone to try to help.”

Liz, who received an MBE for her service in 2010, admits being a “workaholic” who is “terrified” of the day when she eventually has to retire.

“If I wake up and have nothing to do I will go out and find something,” she said.

“There is always a job somewhere to be done and I’ll make sure that I’m the one to do it.

“Even on my days off I check my work emails to see if there’s anything to do.”

There is currently no retirement age for PCSOs and Liz says the finish line for her isn’t in sight quite yet.

“I have no plans to retire any time soon,” she said.