HomeGeneralHealthMost Popular‘I Think I Will Still Be Doing It At 100!’ – Britain’s Oldest Yoga Teacher Is Still Teaching Packed Classes – At The Age Of 90 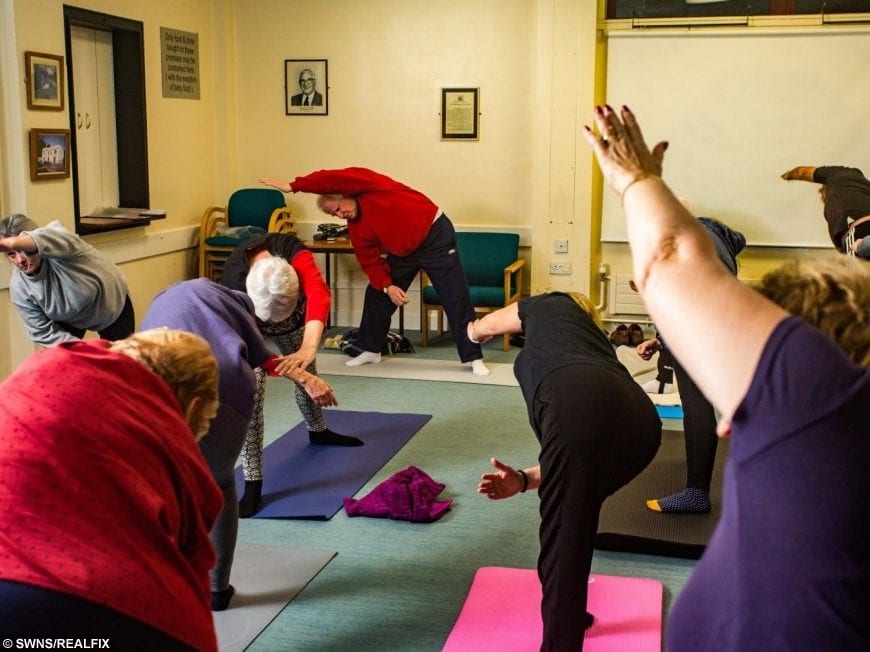 Britain’s oldest yoga teacher is still teaching packed classes – at the age of 90.

Super-fit pensioner Tom Allan only picked up the pastime at the age of 55 as he didn’t fancy jogging in the rain.

But more than than 30 years later Tom is still passing on his vast experience of the ancient art with his bendy joints and flexibility defying his advancing years.

He still teaches twice every week and after celebrating his 90th birthday with friends and family he said he had no plans to stop any time soon.

Tom, of Plymouth, Devon, said: “I think I will still be doing it at 100 and have no intentions of retiring in the foreseeable future.

“The oldest yoga teacher in the world is a lady in America who is 101 and I definitely have her record in my sights.

“That’s to do with balancing as I have an on-going eye problem. But most of it I can still do as well as I could when I was a lot younger.”

Taking early retirement from working at a pharmaceutical company at 60, Tom said he wanted to keep busy and keep teaching yoga – and says that’s what’s kept him fit and healthy all these years.

He currently teaches two “almost full” classes a week at Plympton and has spent much of his life trying to follow “the eight limbs of yoga” – the principles of yoga.

He says yoga is “not just about exercise”, it’s a “way of life” and he has adapted his life to reflect the ‘Eastern style’ of yoga.

Tom, who has been married to wife Gwen for 67 years, was born and grew up in Scotland, and at his busiest taught six classes a week in Glasgow, including at the university.

He started his yoga journey by attending classes for two-and-a-half years, before he was offered a place on yoga teaching course – and he’s now been running classes for over 30 years.

“I was looking for some form of exercise, I was looking at people in all sorts of weathers racing around trying to get fit and that didn’t appeal to me at all.

“Somebody mentioned the word yoga so I made inquires about it and started going to classes.

“I was a student then and I went to several classes a week for two and a half years until I was invited to take the teacher training course.

“This all happened in Glasgow, the course was based partly Glasgow partly Edinburgh.

“After that, when I retired at 60 from my work, I started my own classes in Glasgow.

“I had six classes including one at the university and another one I had that was very interesting was one for people with learning difficulties.

“I also had one for the partially sighted and those with partial hearing – they were very interesting to work with.”

Tom spent most of his working life with a pharmaceutical company, except during his national service which was in the Navy.

When he left Scotland for Plymouth 20 years ago he thought he would struggle to find a new customer base.

But soon he discovered Harewood House – the site from where he now offers his classes.

He added: “I thought Id’ have a very hard job getting six classes going in Plymouth however I heard about this building, came along and had a word with the caretaker.

“He said ‘we used to have a yoga class here but we haven’t had one for a few years’ so he told me to go to the Civic Centre and see the council about it.

“I did and they agreed to let me have this room for teaching yoga and the two nights that the students chose were on a Monday evening like we have now and Saturday morning.

“I just teach the two classes a week now and they are almost always full. That is to a dozen people each as I can not take any more due to the limitations.

“I still enjoy it very much. Who would not enjoy being in the company of a dozen lovely ladies.

“It has very much kept me in the shape I am now. I follow the yoga lifestyle and do everything in moderation so have kept my weight very constant.”