They siblings touched the hearts of the nation after their desperate mum launched an appeal for bone marrow donors – begging Brits: “Please save my boys.”

The brothers, aged eight, have Juvenile Krabbe Disease, which quickly ravages the nervous system – and the youngsters were getting worse by the week.

Mum Laura Otter, 37, and Dean King, 39, knew the odds were stacked against the boys, as doctors battled to find donors before they become too weak to survive treatment.

The average life expectancy of a child with the rare disease is just 12.

After the twins, from Sileby, Leics., were diagnosed, Laura launched a UK-wide appeal for donors to come forward in desperate bid to give her sons the chance of life.

Juvenile Krabbe Disease – which affects fewer than one in a million children – left the boys, who also have cerebral palsy, unable to walk unaided.

Experts warned that without a stem cell transplant they only have three years left with any real quality of life.

Their parents were warned that the disease would rob them of their sight and ability to feed themselves, until they can no longer breathe unaided.

The only way to ensure doctors could harvest enough stem cells for both boys was to find two matching donors.

Neither of the twins’ sisters Ellie-Mae, 12, and Shannon, 15, were a match, nor are any of the one million people on the Anthony Nolan donor register.

In April last year they underwent the stem cell transplants at Birmingham Children’s Hospital. Luis had to have two transplants as the first did not work.

This week the brothers’ recovery took another step forward when they were deemed fit enough to re-join their classmates at school.

They are now making new friends at Ashmount School in Loughborough, Leics., as they settle into a new routine. 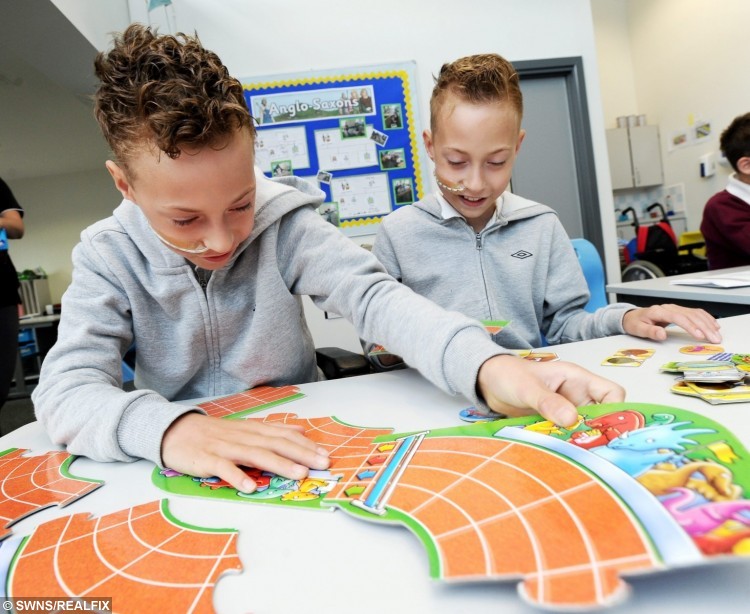 Proud mum Laura, who was forced to quit her hairdressing job to care for the boys, said: “They have settled in really well.

“They are getting used to having a routine again, although they can find getting up for school is a bit of chore.

“But they are enjoying their classes. Both seem very popular – we are often late because of all the medication and things we have to do in the morning and everyone welcomes them when they get there and they feel very special when they walk in.

“They are both stable from the transplant.

“However, there has been progression of the disease in Kian.

“We are not sure if it happened during or post-transplant but he needs a lot of support walking.

“We are looking to do some fund raising to get him a more sporty wheelchair and get him into sport. He was very inspired by the paralympics.

“It has been quite an emotional battle for him as he can remember playing with friends and being the fastest.

“There have been no signs of progression of the disease although he was in hospital in the summer because he had shingles.

“But they are getting stronger all the time and they are always smiling as we all get used to our new ‘normal’.

“I’ve always called Luis and Kian my miracle babies as they’ve overcome so much already in their short lives, after being born 12 weeks prematurely.

“It feels like another miracle that, despite struggling to find them a suitable donor anywhere in the world, we’ve finally got the chance to give them a longer and happier childhood.

“Before they underwent the transplant they had a life expectancy of 12. Now they can expect to live a long and happy life.

“We are taking things every day at a time but they are both loving their school and getting back to normal.

“Luis can walk with support but Kian needs a wheelchair. It’s a struggle for them to get used to their lives but they are so positive and we are looking forward to a happy future together.” 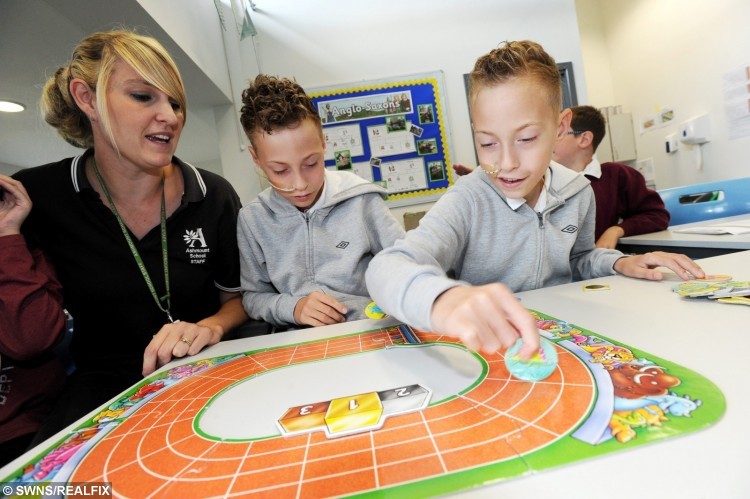 Luis and Kian already defied the odds to survive after complications during pregnancy.

They were born three months early and had bleeding on the brain. They were diagnosed with cerebral palsy.

Luis also suffered a perforated bowel and ripped bladder and had to undergo surgery and both remained in intensive care for three months.

The football mad brothers hit milestones like any other children, learning to talk and walk and then starting school together.

But in October 2014 they started suffering problems with mobility and were diagnosed with Krabbe, a genetic flaw meaning they could not make an enzyme – myelin – which protects the nerves from damage.

As a result toxins are building up in their bodies, robbing them of their motor skills including the ability to walk.

A bone marrow transplant was their only hope of survival as no other treatment options are available.

Earlier this year the twins were awarded Gold Blue Peter Badges in recognition of their personal courage and inspiration in encouraging people join a national stem cell register.

David Deacon, headteacher at Ashmount School, said: “We are delighted at how well Kian and Luis have settled in.

“They are doing really well, particularly in how they socialise with the other students.

“They are lovely boys.”

Outrage : Dementia patient was left wandering the streets for FOUR HOURS after being left outside wrong house