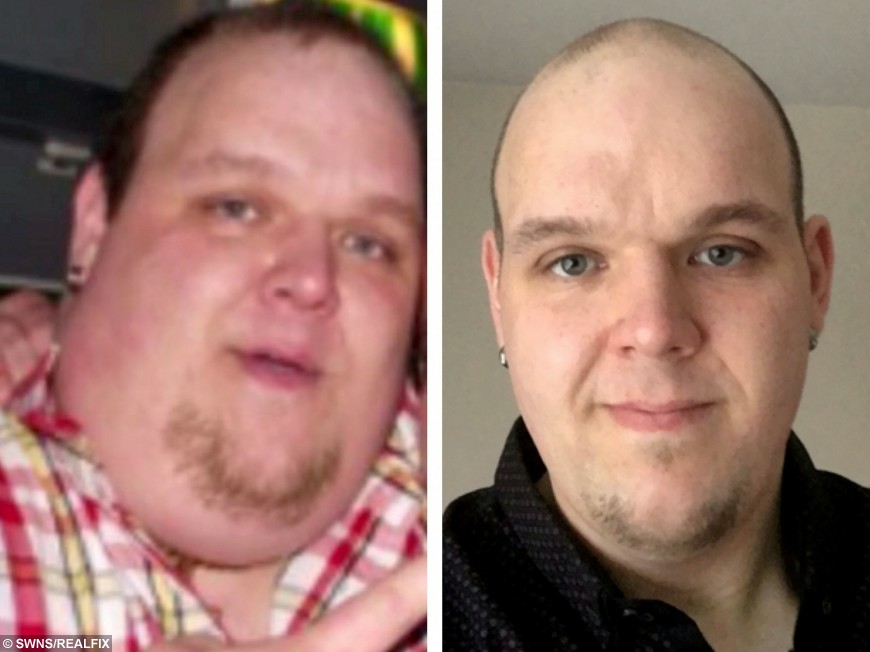 A lardy takeaway addict who was hooked on KFC has lost an incredible 15 STONE after being shamed into dieting when he almost got trapped in his car.

Jason Storer, 34, ballooned to a whopping 35st 11lb after gorging on junk food every day washed down with Jack Daniels and full-fat coca cola.

At one stage the airport operations supervisor was munching through 5,000 calories a day and had a Body Mass Index (BMI) of 66 – more than twice the recommended level.

He suffered from gallbladder pain, struggled to walk and had bad asthma, but he decided to lose weight after he got wedged in his car. 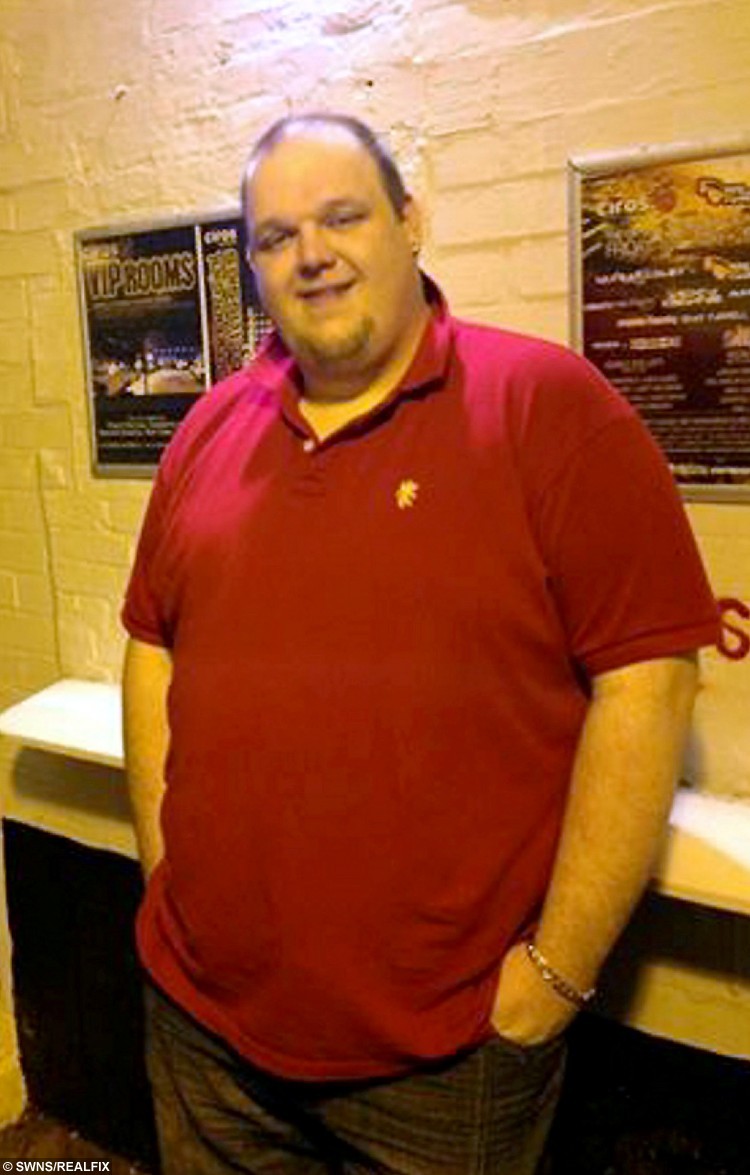 He went from a 54ins waist to a trim 38ins and now weighs just over 20st – but he is determined to slim down even further.

Jason said: “I would spend ages scouring car parks to find a parking space which I could get out of.

“At my heaviest I really struggled to even get out of my car and I just knew I had to do something to change my life. 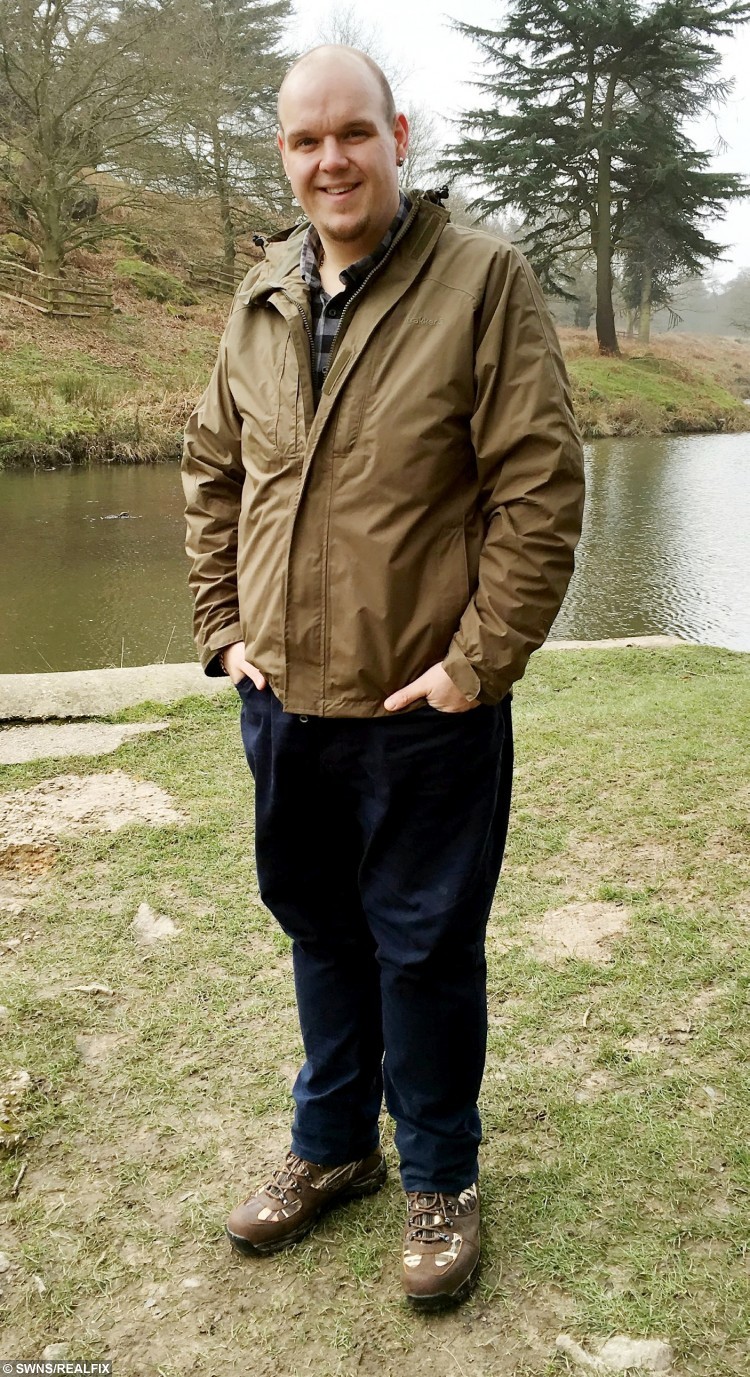 “It would always have to have a big gap next to it, else I could not get out.

“It was very embarrassing. I felt terrible.

“I had always been a big lad but this was just too much. I worked in an office, didn’t exercise and loved going out at night and I was single. I was not active at all.

“I would have one litre of Jack Daniels before, and then another half-a-litre after. I was a big lad so it took a lot for me to get drunk.

“I would often have a KFC before my night and then a Chinese afterwards. I think I was addicted.

“That was my typical Friday and Saturday night. 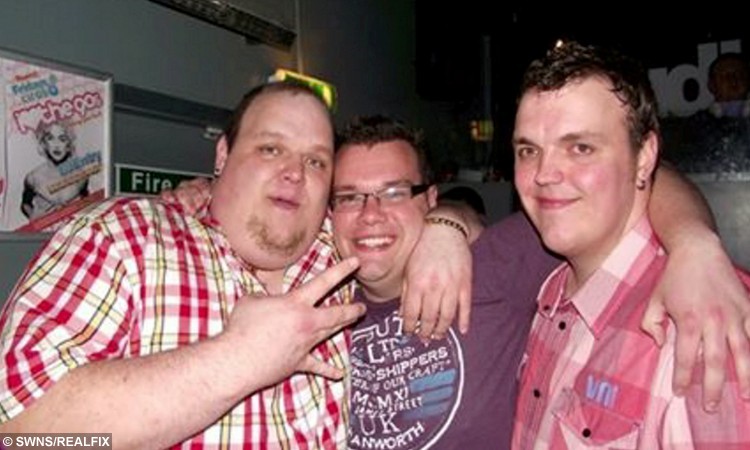 “I would also drink a lot of fizzy pop. The problem just got worse and worse until I was 35 stone.

“I ate a lot of takeaways, mainly over the weekend after a long week at work.

“I was binge eating and it was spiralling out of control.

“I met Lisa through work when I was at my heaviest. She has never had a problem with my weight or said anything bad to me.

“One day, we went for a walk and I started sweating everywhere within minutes.

“This is when I thought it can’t carry on and I need to do something. 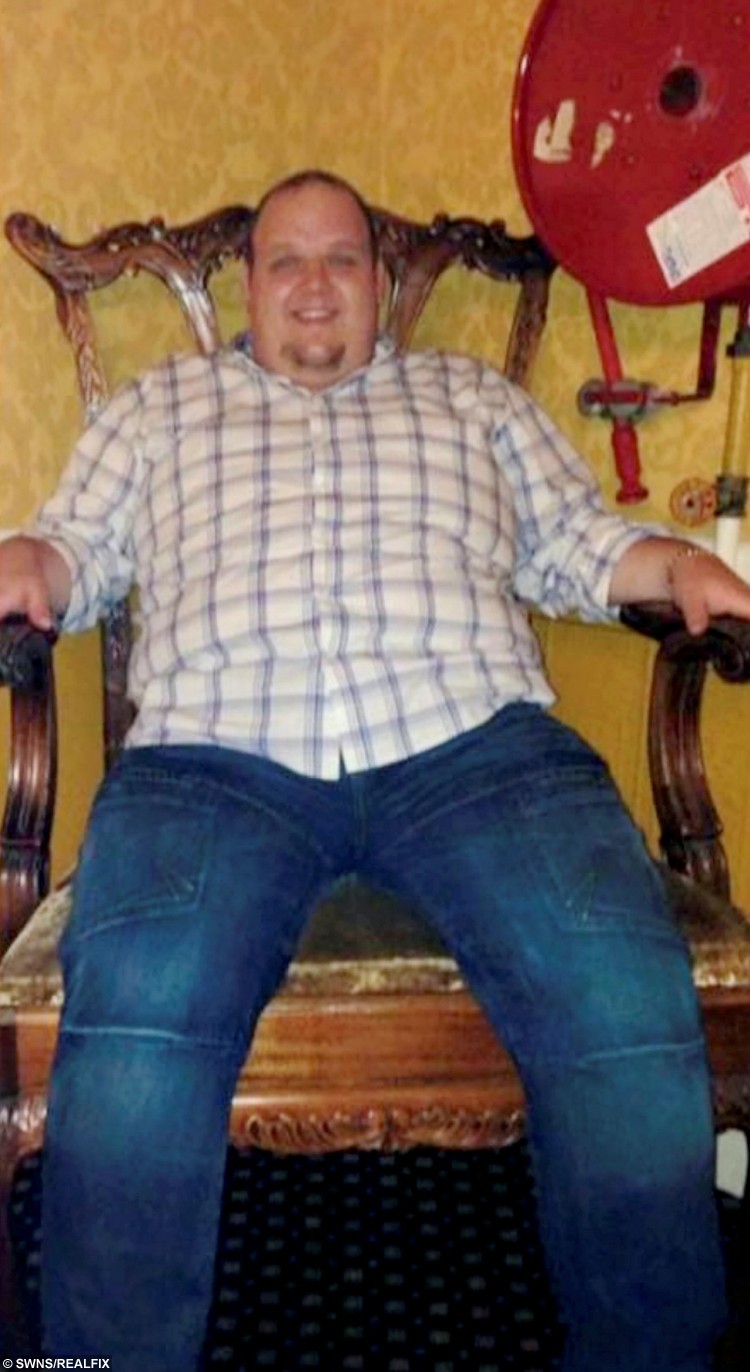 “I didn’t want to be dead before I was 40 or for Lisa to be pushing me around in a wheelchair because I couldn’t walk.

“We went home and looked into Slimming World and I liked the sound of it.

“I joined online two years ago, but began going to group sessions in January this year as Lisa is at her target weight and she encouraged me to come.

“What I love about Slimming World is that nothing is banned.

“I can still eat things like a double bacon cheeseburger and chips or curry, because I cook it in a healthier way and use lean meat and fat-free cooking spray instead of oil. 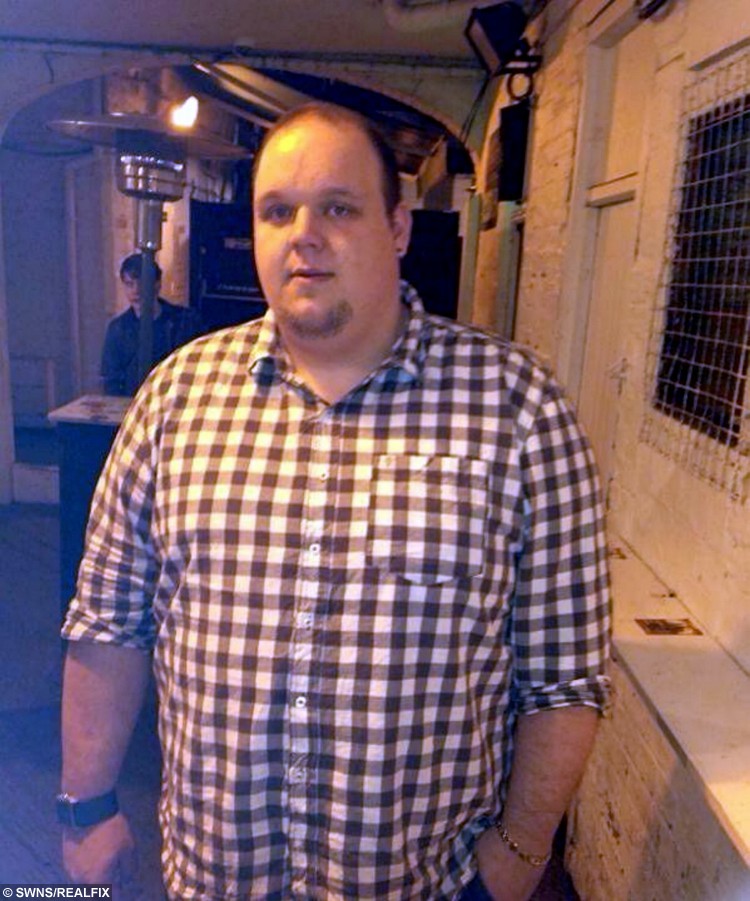 “The weight started dropping off and I was really pleased that I was seeing such amazing results.

“I have been Slimmer of the Month for the past three months and was nominated for the Greatest Loser award.

“I am currently losing about one stone month. My confidence is sky high and I can’t wait to go on honeymoon to Cuba and feel good at the pool. 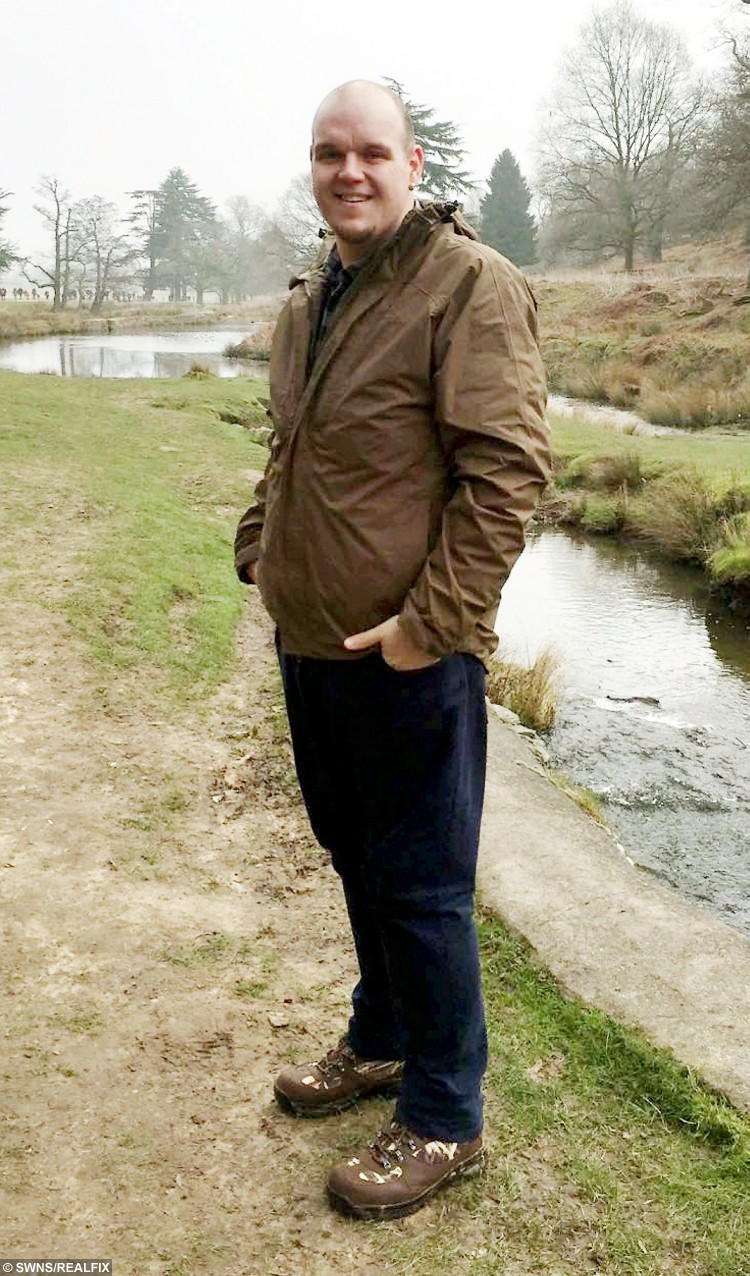 “I still cannot get my head around it. Looking in the mirror now is very strange. I cannot recognise myself anymore. I feel so much better about myself and my confidence has improved.

“I was a 58ins waist before but now I have to buy new things every month because the clothes are just too big for me now.”

Jason now aims to lose a further two stone in time for his wedding to Lisa Iwaskiw, 42, when they tie the knot next year.

Gill Houston, of Slimming World, said: “I have been running Slimming World classes for five years and this is the biggest loss I have had in my group. He is a fantastic person.

“He never moans, he always works hard and is very positive.”