A Lamborghini driver was slapped with a fine for leaving his £400,000 motor on double yellow lines – because he feared it would be damaged in a public car park.

Pictures show a traffic warden issuing a £35 ticket on the gleaming metallic pink convertible after owner Moosa Navsa parked it illegally at 11am on Tuesday (25/10).

But Mr Navsa, who splashed out £10,000 on a rose gold paint job for the Aventador SV, said the penalty was cheaper than risking scraping it in a pay and display car park.

He said he was running late for a meeting at Club XY on Wellington Street, Leicester, so he left the 700 brake horse power supercar outside the club.

Mr Navsa, director of event company Navsa Ltd, said: “It is cheaper to pay for a £35 ticket to have it in front of your eyes, rather than pay for damage.

“It can get damaged going up the ramp in a car park because the car is so low and wide. Usually the barriers are quite tight, too.”

The Italian motor can reach 62mph from standing in 2.9 seconds and has a top speed of 217mph.

Mr Navsa, who paid his fine on the day, said: “Wherever you go, someone stops and looks. You get people from children to grandparents looking at it.”

Richard Hilsden, 54, who volunteers at nearby Leicester People’s Photographic Gallery, captured the moment the car was slapped with a fine. 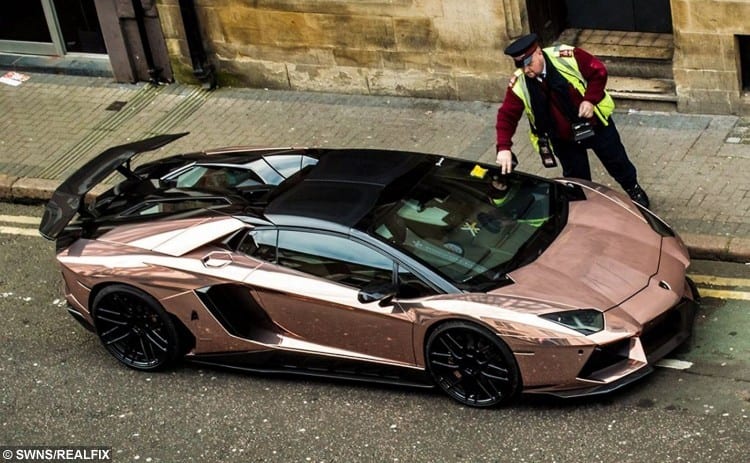 Richard, of Bushby, Leicester, said: “I saw a lot of people taking pictures of the Lamborghini. I saw people taking selfies with it too before the warden arrived.

“I thought I would make a little documentary of the traffic warden ticketing it.

“The warden waited ten minutes before putting a ticket on. He didn’t put it on immediately.

“I think the person whose car it was in the XY Club. I saw a man holding the ticket and talking to two friends before he drove off at around midday.

“I thought the price of a parking ticket is not going to be much to him.”

A city council spokesman said: “We treat all drivers equally. Anyone who parks illegally can expected to be ticketed.”