A football-mad mum who was days away from being made homeless is back on her feet after starting a thriving business – selling Leicester City FC-themed STILETTOS.

Hazel Orton, 41, started making the Foxes-inspired shoes after losing her job as a sign maker after injuring her hip in a fall.

The mum-of-three fell behind with her rent and was forced to go to food banks in order to feed her family.

But her fortunes changed when a friend asked her to design a special pair of Leicester City FC shoes for her to wear at a party to celebrate the team winning the Premier League. 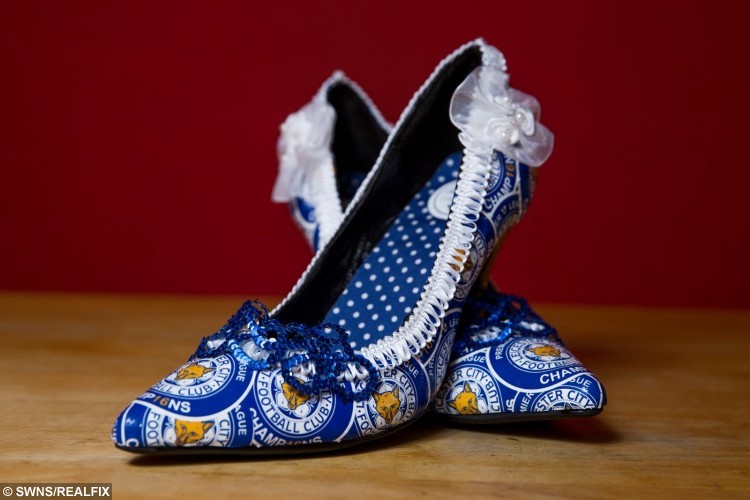 Hazel bought a pair of £5 shoes from a charity shop and covered them in Leicester City FC badges and insignia.

Just days after posting a picture of her creation on Facebook she was deluged with orders and now makes around 50 a week at a price of £50 a pair.

Hazel, who lives in the suburb of Beaumont Leys in the city, said: “I had to finish work due to a hip injury.

“I couldn’t get another job and I was going to food banks before this, for about six weeks.

“Luckily, I have an understanding landlord but I couldn’t have carried on. I was days away from being homeless.

“When I was going to food banks, I was very low.

“I didn’t have money to eat properly and I lost so much weight I had to have a prescription for protein drinks.

“When you get to the point where you’re going to food banks, it’s not easy.

“You feel demoralised and at the bottom of the rung. Not because the people there make you feel like that – they’re lovely – but you can’t help it.

“I’ve always been creative and when someone asked me if I could do Leicester City themed shoes they literally went mad overnight.

“When the shoes took off it was like my prayers had been answered.” 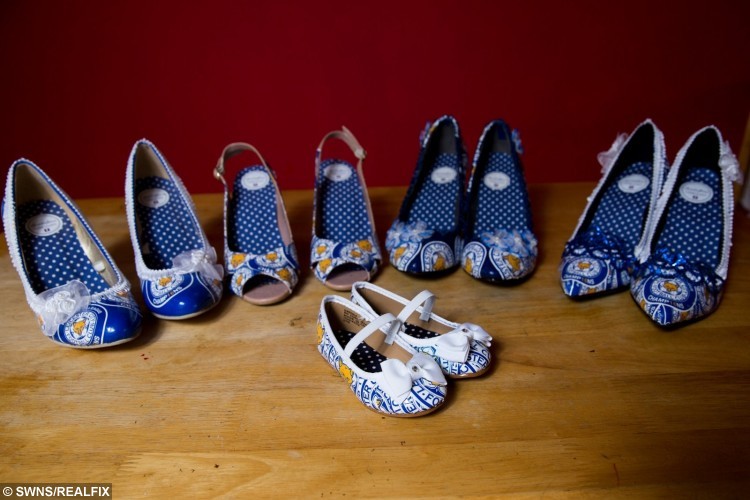 Hazel, who has a degree in multi-media textile design and business, lost her job making signs in March 2015.

She said: “It all started happening as Leicester took off. I was making about 30 a week at the time and now make around 50.

“I didn’t have time for anything else, but that was brilliant. I was working almost 24 hours a day.

“The last two weeks I’ve been inundated. I’ve even been stopped in shops because people recognise me as ‘the shoe lady’.

“I’ve got a few regulars now, which is nice.

“I’m doing men’s shoes and children’s as well as women’s.

“People send me their pictures of them wearing their shoes at the stadium and I’ve got some at Wembley, and also at weddings. I’m so pleased with it.”

She said: “I want them to be affordable because I know what it’s like not to be able to afford shoes.

“I see loads of customised shoes selling for hundreds of pounds, but I don’t want to do that. I want them to be guilt-free. That’s why I keep prices low.

“And if a customer sends me shoes to cover, it saves me time and money – plus, they know they fit properly – so I’m happy to charge less. I want them to be accessible.”

Hazel, who also has two grandchildren, says her life has completely changed in the past year but she believes “it was meant to be”.

She added: “I love shoes and I love Leicester City FC so it’s a lovely way to earn a living. It really has kept me going. Leicester City saved me from ending up broke.”

Meet the grandfather getting naked to supplement his pension

MISSING : Dog owner worried the public will treat his pet like a wild animal because she looks like a RACCOON

MISSING : Dog owner worried the public will treat his pet like a wild animal because she looks like a RACCOON