A teenage girl was sent home on the second day of the new school term after teachers insisted her trousers were too TIGHT.

Scarlett O’Donoghue, 14, had just rejoined friends after the summer holidays and taken her first steps preparing for GCSE exams.

But the Year 10 pupil was pulled to one side by staff and told to change her pants – for which mum Claire paid £27 for three pairs from the Asda school range – or go home.

It’s understood around 40 pupils were given their marching orders or put into isolation for breaking the secondary school’s ‘zero tolerance’ uniform rules.

Scarlett’s unimpressed mum Claire, 42, was contacted by Forge Valley School in Sheffield, South Yorks., on Wednesday to be told her daughter was not allowed into class.

She said: “Scarlett was so excited about starting her GCSEs – I was livid.

“We’ve not got a lot of money and Scarlett knows we’ve not got £50 to spend on an outfit she can’t wear.

“What I cannot get over is what right does one teacher have to say my child’s trousers are too tight?

“Scarlett thinks she’s too fat like a lot of teenage girls – for someone in authority to ‘say your clothes are too tight’ is disgusting.

“A lot of girls also have issues about their weight and their body image.

“So if you have an adult telling you the skirt is too tight it’s going to hugely harm your self-esteem.

“What is that saying to teenage girls about their self-confidence when they are already worried about their weight.

“They’re sexualising young girls who should be allowed to wear whatever they want to wear.

“Scarlett has been very upset and angry about the whole thing. We spent over £50 on new school uniforms and the school are not going to give me that back.”

It was the second time Scarlett had been pulled up over uniform after she arrived in school the previous day wearing a skirt which staff said was ‘unacceptably tight’.

Claire has been left “disgusted” after forking out £51 on three pairs of trousers and three skirts to be told by teachers the clothing was “unacceptably tight”.

Claire, who runs a glazing firm with husband Michael, 51, took to social media to vent her frustrations – which were echoed more than 100 other angry parents.

Buoyed by the support she received from other parents on social media, Claire has started an online petition to see the school’s uniform policy relaxed.

So far it has attracted more than 500 signatures.

However, mum-of-two Claire was told by the school’s headteacher, Dale Barrowclough there would be ‘no relaxation or review on the policy’.

He said: “We have the uniform policy because it promotes a professional ethos in the school and it allows pupils who can’t afford branded clothes to avoid bullying.

“This is something that was raised by parents and which is why they wanted the uniform policy and it would be unfair to change it now.

“I’m not prepared to relax our high standards. It’s why Forge Valley is oversubscribed and we could not say that when the school opened.

“Parents are always given adequate warning about next year’s uniform in my end of summer term letter which says that full uniform must be worn for the start of September.”

Mr Barrowclough said that a ‘small number of pupils’ were sent home from school on Wednesday but said he could empathise with parents over buying uniforms. 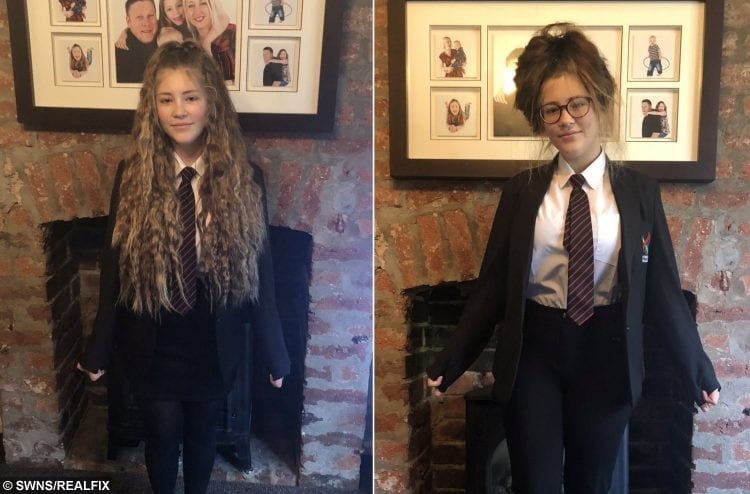 He said: “We sent home a girl with bright green hair, girls wearing mini skirts, trousers that are verging on being leggings and girls wearing black trainers. It clearly does not comply with our uniform policy.

“A number of suppliers that sell school uniforms don’t comply with our policy. Parents have been given adequate warnings and today all pupils came in dressed impeccably.

“I believe we are consistent but with any policy, some sense of judgement needs to be made. But tight trousers verging on leggings is not school uniform.”

The guidelines issued on the Forge Valley website states ‘all pupils are required to wear the school uniform’.

It states: “Plain black formal tailored trousers with a front pleat/crease in suit type material. Must not be tight fitting.