Married Mum-Of-Two Tricked Into Sending £5,500 To Man She Met On Instagram – An Online Scammer Who Used Her Naked Photos As Bribes For Cash

A married mum had to confess she’d sent £5,500 to a secret Instagram boyfriend — after he threatened to send her naked selfies to her husband.

Gail Astin, 44, fell for a man who said he was a widower called David Williams, a US marine engineer and dad working in Nigeria.

The lonely housewife had been signed off work with stress, and connected with the trickster after struggling to confide in husband of 16 years, Simon, 44.

Over four months, they exchanged thousands of Whatsapp messages, emails and phone calls and she secretly sent him a total of £5,500 he said he needed for food and bills.

But when she refused to send more money, he threatened to send her family and friends naked photos she said she was pressured into sending him months earlier.

One horrific message asking for £2,000 within 30 minutes said: “I wonder how your [family] will think of you when your nicked [sic] pictures get viral.” 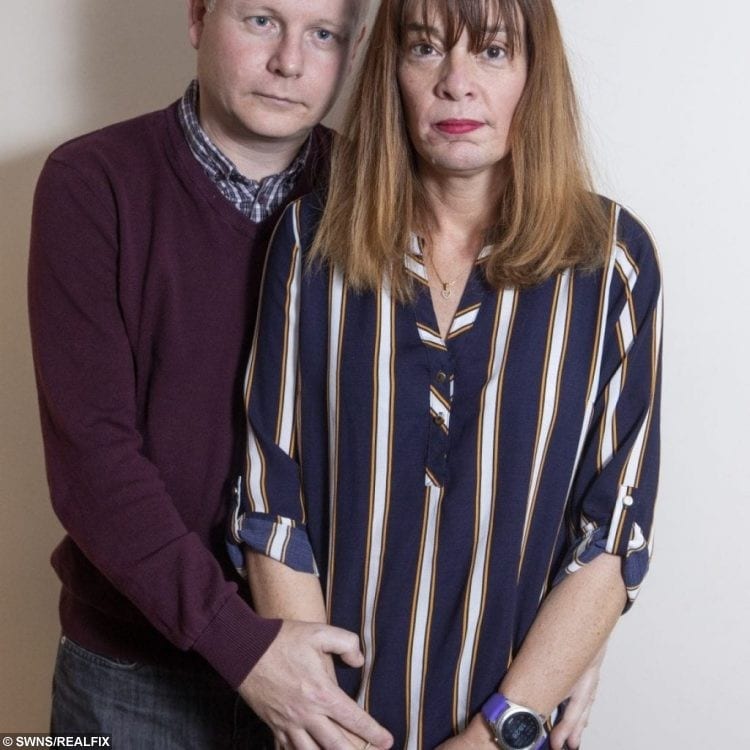 Distraught Gail phoned police and confessed to Simon – who was angry, but promised to stand by his wife.

The fraudster was actually using photos of Portuguese businessman, Pedro Hipolito, 46, who said he’s furious the trickster is using his image to exploit vulnerable women.

Gail, from Jedburgh, Scotland, is bravely speaking out to warn others and said: “I was going through a bad time.

“I felt lonely and needed someone to talk to. He caught me at a low point.

“At first he asked for £200 for iTunes cards so he could buy data for his phone. He seemed so desperate and just kept asking me. He was persistent.

“He started asking for more and more but he promised he would get the money back to me. I honestly believed him. 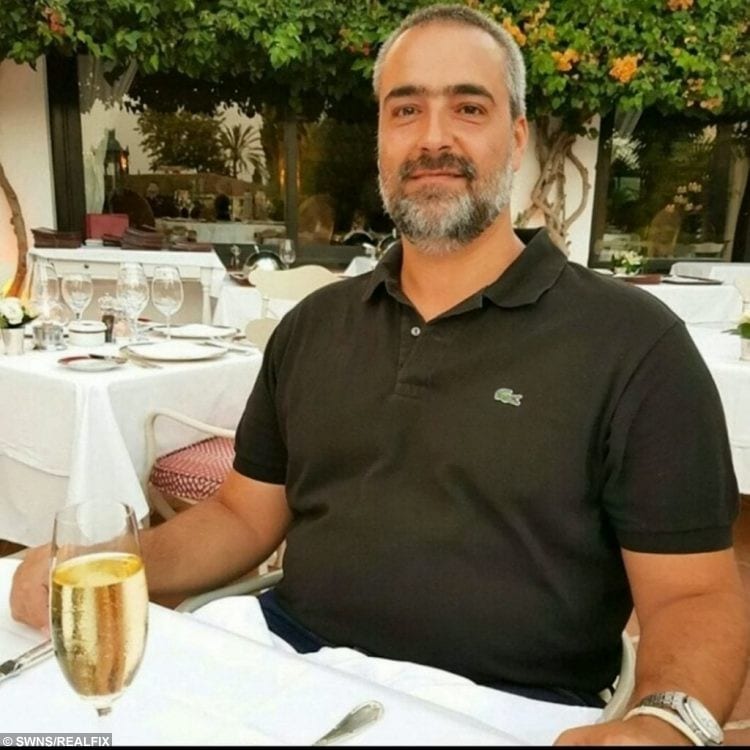 “I knew in my head that what I was doing was wrong but I did still it. I can’t explain why. I was just in the wrong frame of mind.

“He lured me in and kept asking for more and more.

“I didn’t want to send him anymore money. When I said no he told me he would send the photos to my mum, dad, sister and husband.

“I’m ashamed of what I did. I didn’t want to take the photos but he wouldn’t stop asking for them.

“I didn’t want to hurt Simon but I didn’t know what else to do. I had to tell him.”

Gail was contacted out of the blue by a man who said he was David, 55, in August last year.

She said she was desperate for friendship after feeling “isolated” following the family’s move from Burnley, Lancashire, to the Scottish border, in 2011.

She says she couldn’t find a way to talk to her family about her mental health so when “caring” David got in touch, Gail felt “special again”. 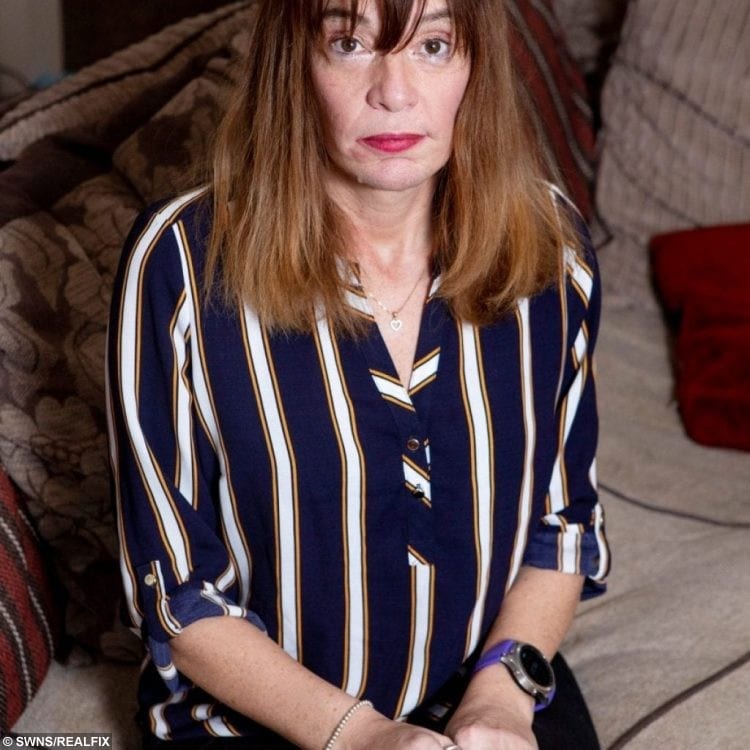 Gail has been married to Simon since 2003, but quickly fell for the stranger who said he was from Texas, after exchanging messages daily.

He said he had moved to Nigeria for work, and needed financial support for food and travel.

Gail said David came across as a “genuine” person who seemed to take an interest in her life.

‘David’ and Gail started out as just friends but when the fraudster told her he loved her, Gail admits she began to fall for him.

In September, after just a month of chatting on Instagram and later on WhatsApp, David “pleaded” to Gail for her to send him naked photos.

Gail explained: “He always told me to trust him, and I did.

“He told me his wife had died and I felt sorry for him. He pulled on my heart strings.

“He always came across as caring and sympathetic towards me too.. He took an interest in what I was going through.

“My husband was struggling with how to deal with my feelings.

“He’s not an emotional person so for a long time, I bottled my own emotions up.” 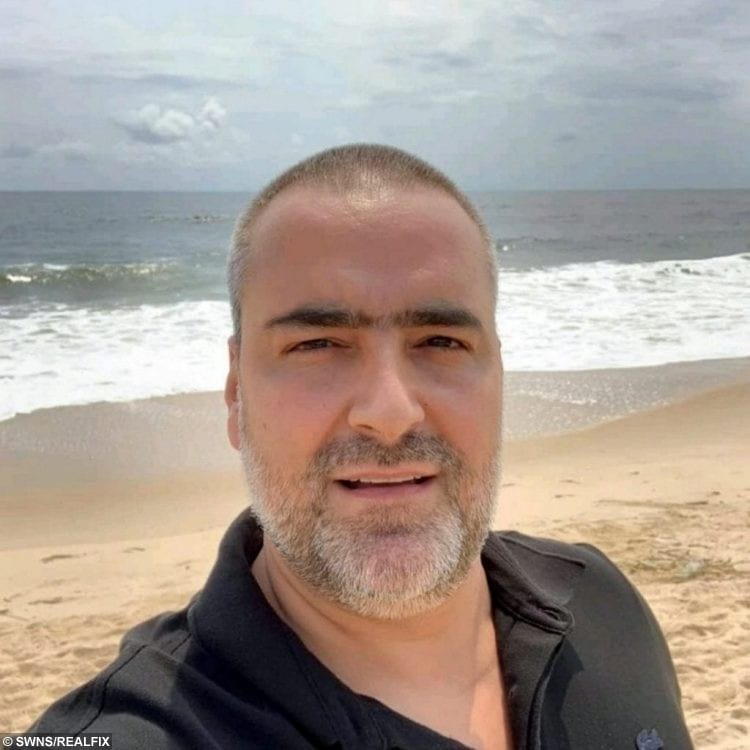 In several transactions between August and December, Gail sent hundreds and then thousands of pounds at a time.

‘David’ said they were collecting the cash on his behalf as he didn’t have a Nigerian bank account.

David said his three month contract in Nigeria was coming to an end, and he needed the money in order to get home to his daughter, Sharon, in the US.

Gail admits she knows she was being “used” emotionally, but she sent him cash via international money transfer service, MoneyGram.

Gail said: “He said he couldn’t get home if I didn’t send him the money.

“By this point he had made me feel special, I felt nice. I fell for him.

“I was getting more and more suspicious but he always promised to get the money back to me when he got back to America.”

She started to doubt David’s promise to pay up when he refused to help pay off her Visa bill in November.

Gail couldn’t afford to keep shelling out thousands of pounds – using two credit cards – without receiving any money back first. 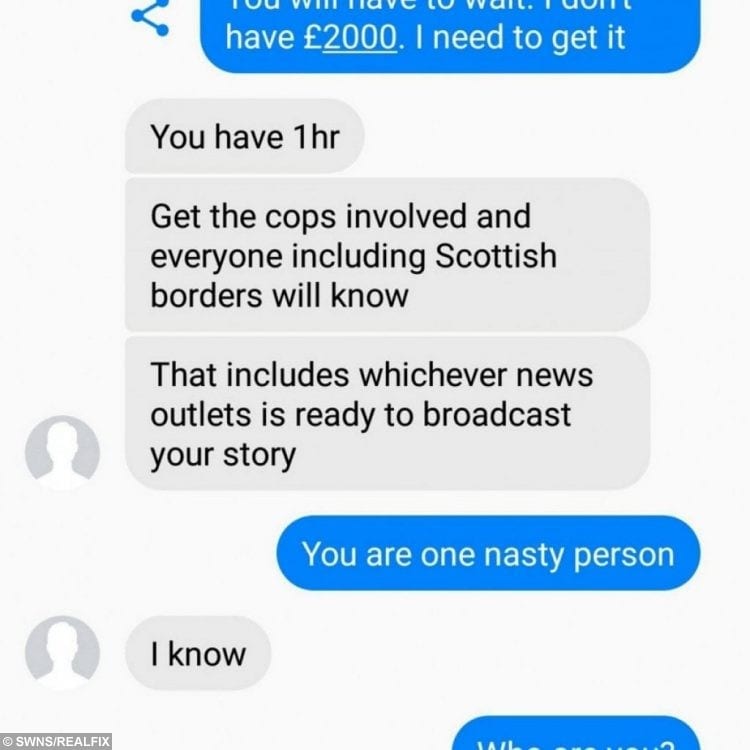 She refused to send him more money in December, and David instantly “turned nasty” and threatened to send her naked photos to her friends and family, she said.

He hounded Gail with messages and said “you will send £2,000 to an account of my choice”.

His messages said: “I am going to be blunt with you as I don’t have the luxury of wasting time.”

“You have one hour. Get the cops involved and everyone including Scottish borders will know.

“Do not f*ck with me am not here to play games. The tough girl act is just going to make things worse for you.”

She dialled 999 on December 5 after feeling “suicidal” when David kept issuing threats and then told Simon everything.

Gail said: “Before this he seemed so genuine. I was so scared. I was a complete mess.

“I phoned Simon and told him to come home from work because the police were at our house. I said I’d explain everything.

“He was angry. I feared for my marriage and I did say that if he wants me to go, I will leave. 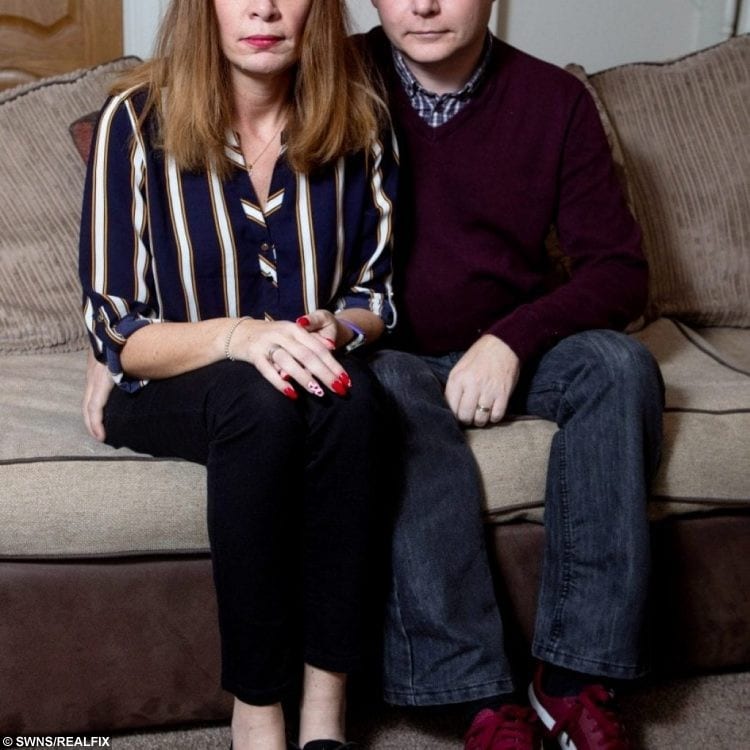 “We try not to talk about it because it makes him very angry. He has struggled to come to terms with it all.

“I feel guilty because we have lost so much money. But he felt to blame too for me being there for me and spending more time together.

“I hate myself for what I’ve done and I thought he would leave me.”

Simon didn’t leave his wife – despite admitting the experience almost “broke” them – and paid off Gail’s debts by dipping into his late father’s inheritance money.

Health and safety adviser, Simon, even blamed himself for a time and questioned whether or not he’d showed his wife enough love and attention.

Simon said: “I had no idea what was going on and I was absolutely clueless and in the dark.

“I had all sorts running through my mind.

“I started to feel guilty. I thought I hadn’t paid her enough attention and felt completely inadequate.

“I thought to my self ‘had I not been paying her enough attention’. 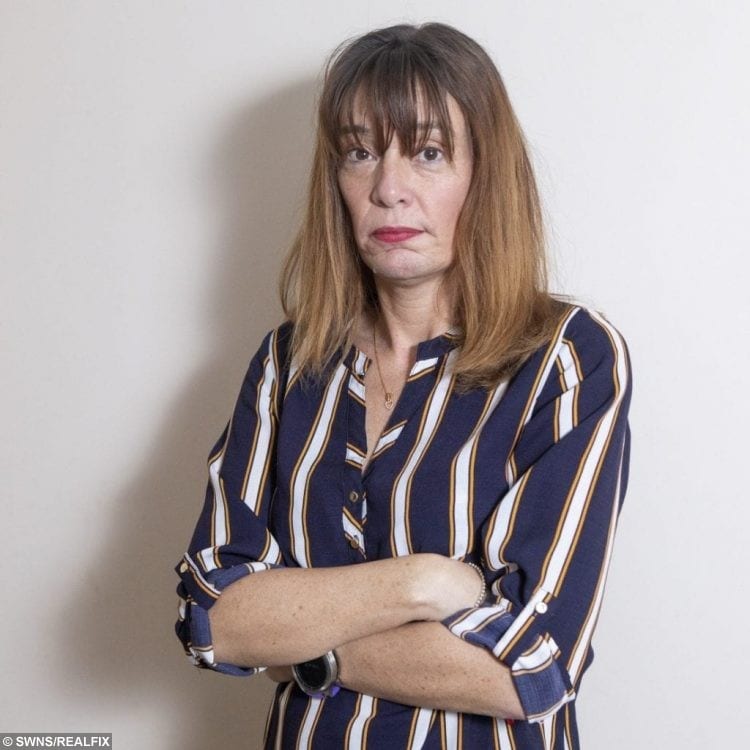 “It was all too much to take in. I couldn’t comprehend why she would do what she did.

“I came to terms with the fact the money was gone forever.

“At one point I didn’t know if we would get through it but I never actually considered leaving her.

“I just wanted to put it all behind us and move on. We are over that rocky patch and we are moving on as a family now.”

Gail last heard from David in mid-December, when he continued to send threats to distribute the photos.

She has since changed her phone numbers, email addresses and social media accounts and says she never wants to talk to someone online who she doesn’t know again.

Simon and Gail are committed to repairing their fractured relationship.

“I’m so grateful that Simon has given me a second chance,” she said.

“I have promised to never ever speak to anyone I don’t know online.

“I will never hide anything from him again.

“I couldn’t put him though it. It has had a massive effect on us all. I’m just pleased that it all behind us now.

“We have just had to accept that the money is gone.” 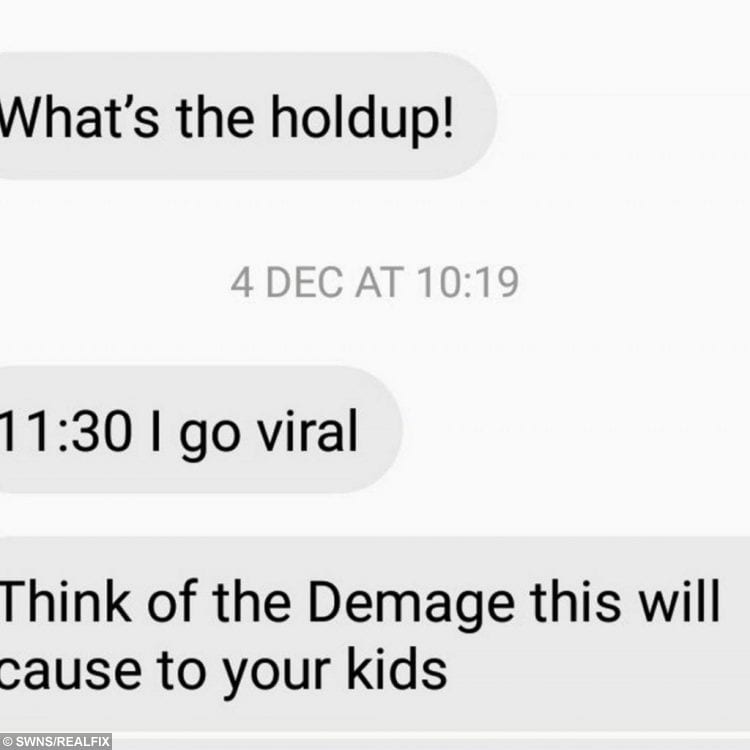 Pedro Hipolito – the real man in the photos used by ‘David’ runs a business which helps companies work in Africa.

Pedro, who lives in Portugal, said he believes his work in Africa makes his identity an “easy target”.

But despite enlisting staff to report “countless” fake social media accounts posing as him, he says there’s nothing he can do to stop the fraudster.

He said: “It’s a crime and I hate that people are doing this. It’s unstoppable. Something must be done to stop these fake accounts.

“It’s terrible that lonely people are the victims. All they want is joy in there lives and they are vulnerable.

“It does concern me, that my photos are being used. But I am not the victim here although it does damage my image.

“They aren’t pretending to be me, but to make what they are doing credible they need real pictures to create a fictional character.

“It’s up to these big corporations to stop it from happening.”

A Police Scotland spokesperson said: “Police in the Borders are investigating a report of an online fraud offence.

“The report was received on Tuesday December 5 in the Jedburgh area.