Meet the grandfather getting naked to supplement his pension

The retired salesman – who hits the gym three times a week – posted ads on Gumtree and was inundated with requests from art tutors asking him to pose in the buff.

He now bares all twice a month and makes £25 to £45 per session – some of which see him holding tricky poses for up to three hours at a time.

Dad-of-two Bruce, of Caerphilly, south Wales, said: “To take your clothes off in front of a class is daunting but after a while you get in the swing of it.

“Even though I was a beginner I found I was quite good at it because I’m pretty fit for my age. I found I was able to hold poses longer than most people.

“You can concentrate on a point in the room, the floor or a window or a desk. You hold that for some time, even though your muscles are screaming.

“Then time is called by the tutor and you go into something else.”

The tanned OAP, who trained to become a personal trainer at the age of 60, added: “I have never felt self-conscious – I felt liberated doing it. I got a buzz out of it.

“I’m a bit of a naturist anyway. We have got enclosed garden and I tend to spend a lot of time with no clothes on.

“My wife enjoys me doing it as well because she is an artist. When I told her I didn’t know what her reaction would be, but she said, ‘Oh, wonderful.’

“I haven’t actually discussed it with my sons. I don’t know what their reaction would be but it doesn’t matter.”

Bruce’s first idea to get rich quick was an ancestry website for tracing family members.

But when he realised he couldn’t make much cash from the idea, the sprightly pensioner decided to try something different.

He now regularly models at life-drawing classes around his home town, as well as doing nude shoots for photographers.

Blue-eyed Bruce – who is 6ft tall – said it fits in well with his domestic duties, which include caring for wife Jennifer, 69.

He said: “We are not that badly off but it is a question of a bit of pocket money coming in because I like a drink and so on.

“It is really about keeping myself interested. I’m not ready to sit on a park bench if you know what I mean.

“Every day at my age, if you get up it is a bonus. I just love life and I love doing what I do and I love a challenge.

“I haven’t met any others even near my age.”

The granddad-of-two, who used to run a tour company franchise, is even appearing in gay magazine Elska this month.

He said: “When I was doing my sales job I never thought I would be doing this.

“I was obsessed with making money and building a life and settling down my family.

“I did that for a long time, made a lot of money and then went onto the management side. It was hard work but fun at times.

“What I do now is totally different. It is a different type of challenge.” 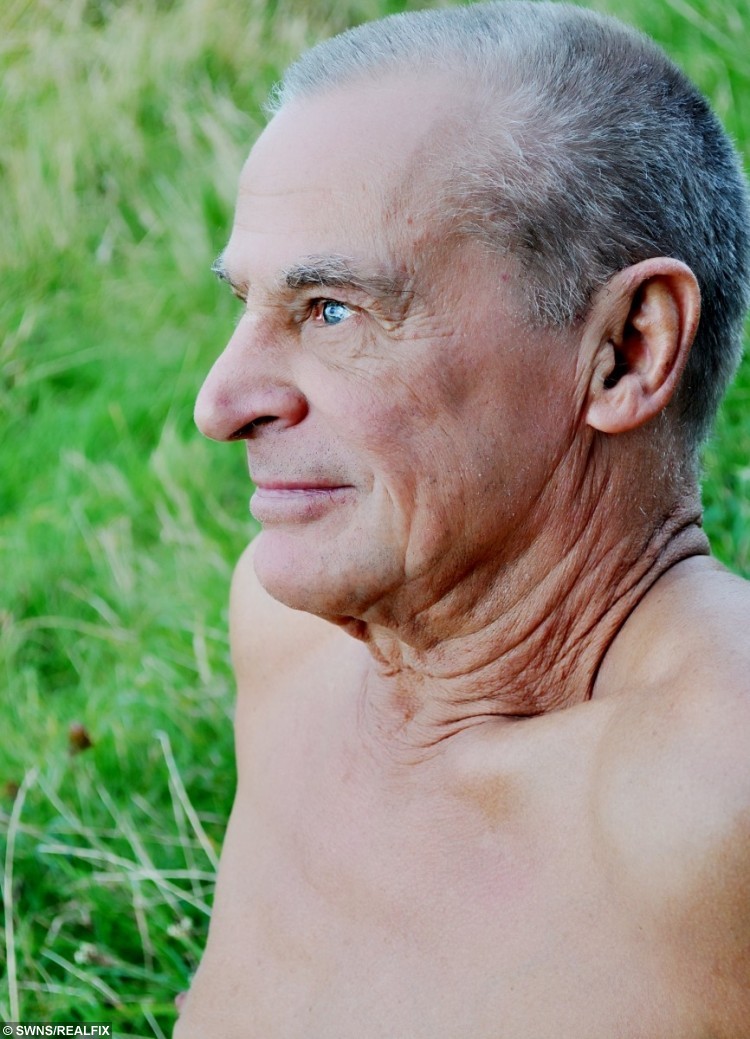 He added: “Most people are in awful physical condition nowadays from their twenties onward and there is no hope for them.

“Most of the people I drink with or socialise with could do with going to the gym and ninety nine per cent of people wouldn’t dare take their clothes off in public.

“Most people are totally horrified but I have always had an enquiring mind.

“It is liberating. If you want a real challenge, just have a go. It has made me happier and changed my attitude.

“You have only got one life.”

Women spend 18 months of their lives worrying about their skin