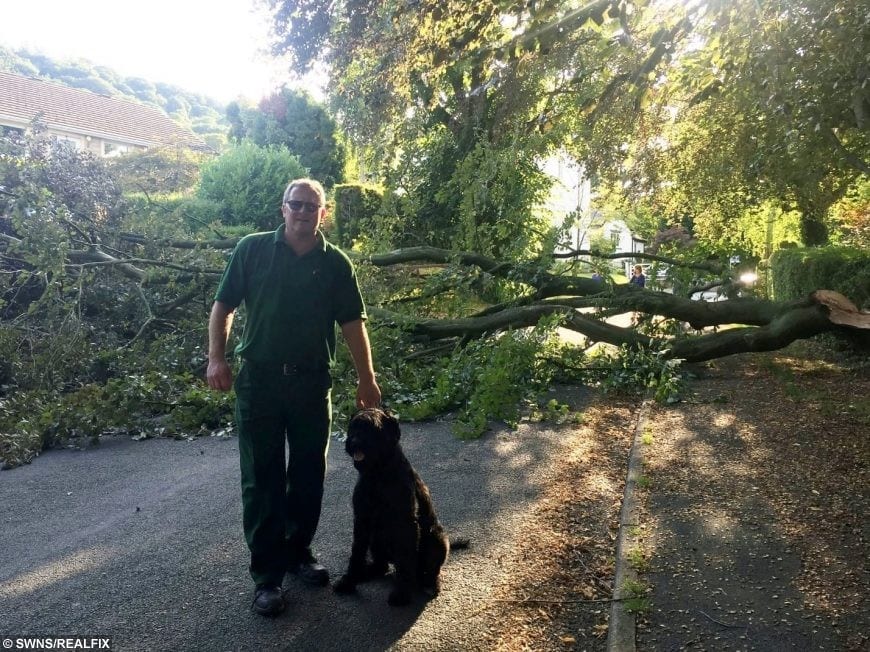 Meet the hero pet dog who is always saving her owners – even chasing away burglars and pulling them out of the way of a falling tree.

Brave Betzi Boo became a hero last week when she rescued her owner Mark Brow, 51, from the path of a falling tree whilst on their evening walk.

Her act of bravery comes just mere months after she saved her beloved family from burglars, chasing them away from her home as they attempted to break in.

As soon as there is a sniff of danger, six-stone pooch Betzi is the first on the scene to ensure her loved ones are safe and not scared.

Since becoming a member of the Brow family in 2017, she’s defended fellow dogs while out on walks and scared off a suspicious man talking to Mark’s daughter.

Schnauzer Betzi Boo defends the chicken coop at his home from foxes and badgers, and has even bounded into the middle of a fight in the park to break it up.

In her recent save, Mark heard a noise in the branches above him on a walk and looked up to see if he could spy a friendly animal hiding amongst the leaves.

The maintenance engineer from Ilkley, Yorkshire, had no idea the tree he was beneath had actually cracked at the trunk and was plummeting straight towards him.

Thankfully, his trusty sidekick Betzi realised her owner was in danger and pulled him to safety, just as the tree came crashing to the floor exactly where Mark had been stood, on August 12.

Mark said: “I’d just got home from work and as usual, Betzi was very excited to see me.

“We set off on our evening walk down the street, and it was very calm, sunny evening with no wind or anything when I heard something in the tree.

“I looked up expecting to see a squirrel or a cat and couldn’t spot anything, but knew there had to be something as a tiny branch had fallen as well.

“Suddenly, I felt this strange shaking and Betzi, who is very strong, pulled me away to the side.

“Almost immediately, it sounded like firecrackers going off and this giant tree came smashing down on where I’d just been stood, destroying a nearby wall.

“People came running out of their houses, but I was frozen to the spot in shock as I realised I had been literally milliseconds from disaster if Betzi hadn’t pulled me away.

Brave Betzi became a valued member of Mark’s family back in 2017 after The Brows sadly lost their previous dog Rizzo to illness.

The courageous schnauzer is adored by Mark and his fitness instructor wife Carron, 50, as well as their four children – Harry, 22, Louis, 19, Charlie, 17, and Lillia, 14.

This isn’t the first time Betzi has put her paws to the rescue, as the tough pup saved the family from an attempted break-in back in May 2019.

Her proud owner said: “There was a spate of car thefts happening in the area three months ago, and they made a mistake trying to pick on our family.

“A gang attempted to crow bar our front door to look for car keys, only to find Betzi on the other side who sprung into full attack mode and chased them away.

“Our car was safe thanks to our brave pet, but it was very scary and traumatic for us as a family, and the police said the thieves still managed to get a BMW in the next village.

“Betzi is six stone and all muscle, so must have given the criminals quite the scare, but she always has a wonderful temperament with us and is an amazing family dog.”

Over the past two years, Betzi has proven to not only be a beloved companion and family member, but a brave protector of her friends too.

Friendly Betzi has two close friends that she spends time with who belong to Mark’s friends – Connie, another giant schnauzer, and little Freddie, a miniature schnauzer.

As soon as there is a sniff of danger, Betzi is the first on the scene to ensure her loved ones are safe and not feeling scared.

Mark said: “We were once out for a walk on the moors with Betzi’s pals, when two big dogs tried to attack little Freddie, but Betzi jumped straight in the way and saved him.

“Betzi also protected my young daughter Lillia when a dodgy looking man approached her when walking in the woods – she’s always on guard when out with the girls of the family.

“Another time, there was a big fight kicking off between this group of youths in a park where we were, and Betzi bounded straight over and broke it up.

“We’ve got chickens that live in the garden too, and whenever a badger or a fox comes sniffing near them, they let out a distress call and Betzi runs to the rescue and scares away the intruder. She’s not scared of anything!”

The fallen tree blocked a main road that is usually full of rush hour traffic, and with all the chaos the obstruction caused, Mark feels lucky to still be here, thanks to Betzi.

The fortunate father rewarded his hero pup with a huge raw steak and the biggest knuckle bone he could find in Ilkley.

Reflecting on his near death encounter as Betzi devoured her prize, Mark found the true meaning behind his dog really being man’s best friend.