by RealFix
in Cute, General, Health
0

Meet tiny Theo Taylor – the smallest baby boy ever born in Britain and survive who weighed the same as a can of Coke.

Theo stopped growing in the womb and was so small doctors even offered his mum Katie Rhodes, 24, a termination the day before he was born.

But the little fighter defied the odds to pull through and despite weighing just 350g (12oz) he battled to survive and his now home with Katie and dad Jay, 27.

The tiny tot, now six-months-old was born early at 26 weeks and five days is thought to be the smallest baby boy ever to be born and survive in the UK. 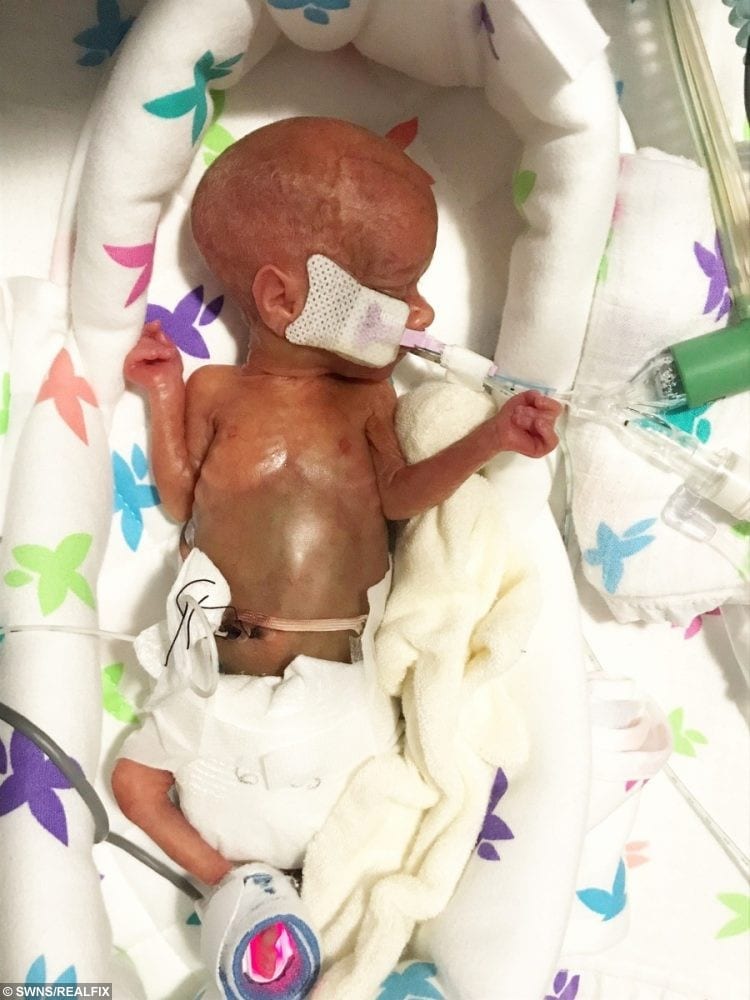 “Before he was born, it was really hard hearing all the time that he wasn’t going to make it, and even when he was born that we might not get to take him home.

“But we got through it by saying, ‘no, he’s made it this far, lets just support him’.

“We were so positive and kept saying that we would fight for him.” 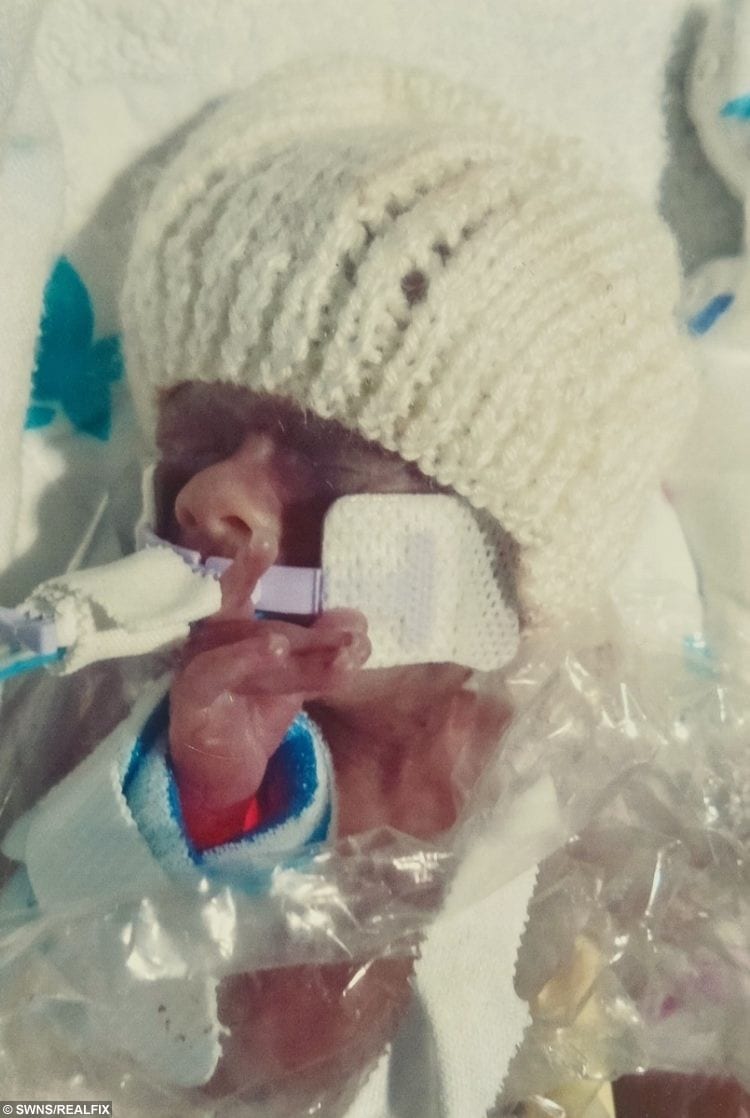 Dad Jay added: “I had never ever seen a baby that small – I didn’t know babies could be that small.

“I kept saying to Katie that everything would be ok and he would be fine, but it wasn’t until I saw him that I realised how serious things were.

“I think that was the most scared I have ever been, but it was also a relief to see him.” 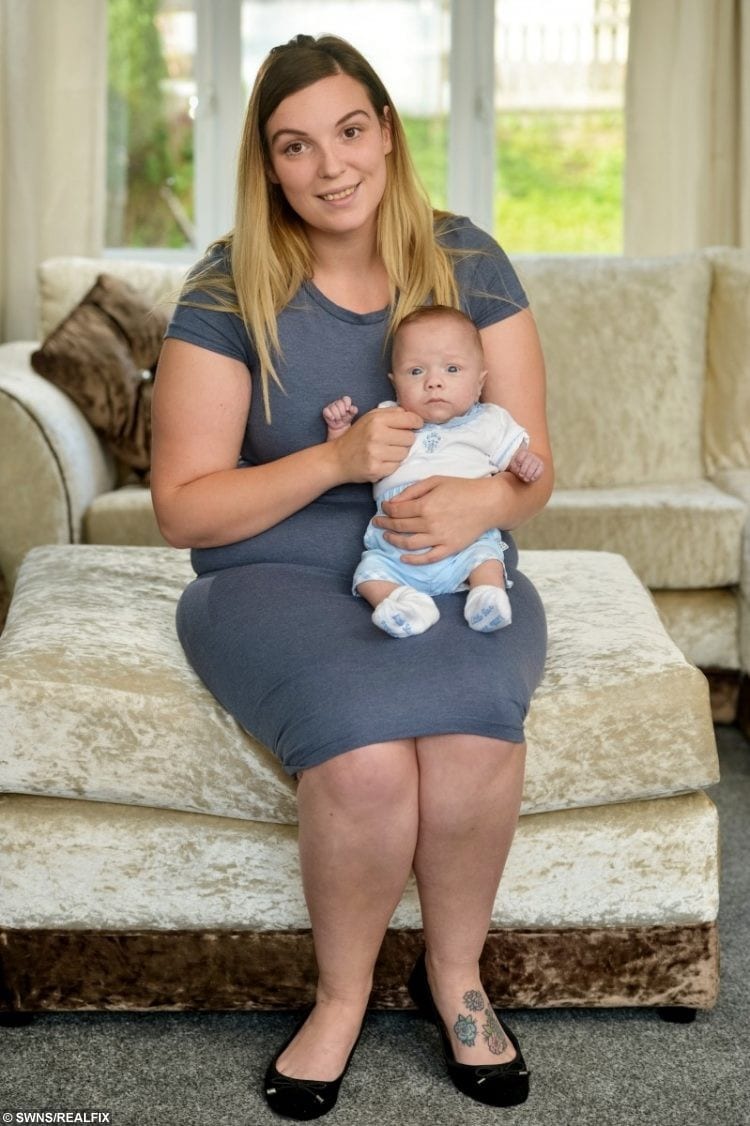 Theo’s proud parents said the pregnancy was normal until the 19 week scan which revealed he was smaller than expected.

Jay, a delivery driver, and Katie discovered he had stopped growing and said they were told to “expect the worse” or “prepare for a demise” at almost every scan or meeting.

Mum-to-be Katie was hospitalised with pre-eclampsia and three days later doctors performed an emergency c-section when tests showed Theo had fluid around his heart. 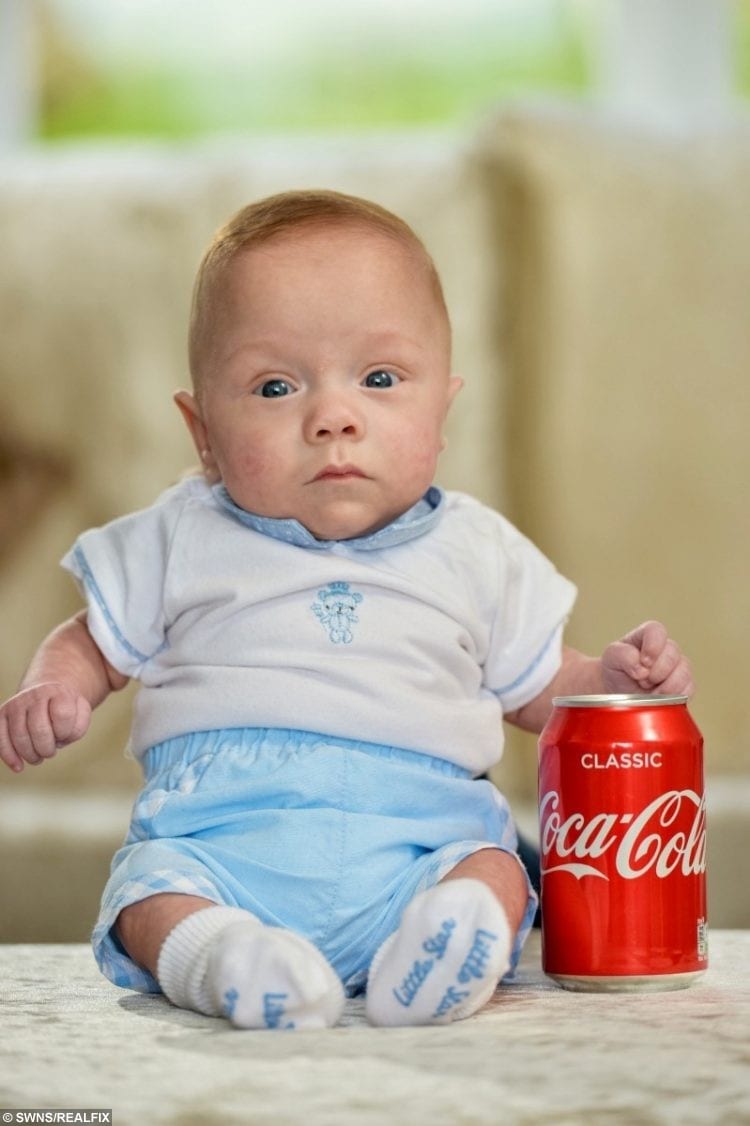 “They were all really good and helpful and said they would do anything they could to help him, but right up until the day before he was born, we were offered an abortion,” said Jay.

Jay and Katie only got to touch his hand for a few seconds before he was put on a breathing machine using the smallest possible tube down his tiny throat.

Doctors warned that he was so small he might not survive long enough to come home, they said. 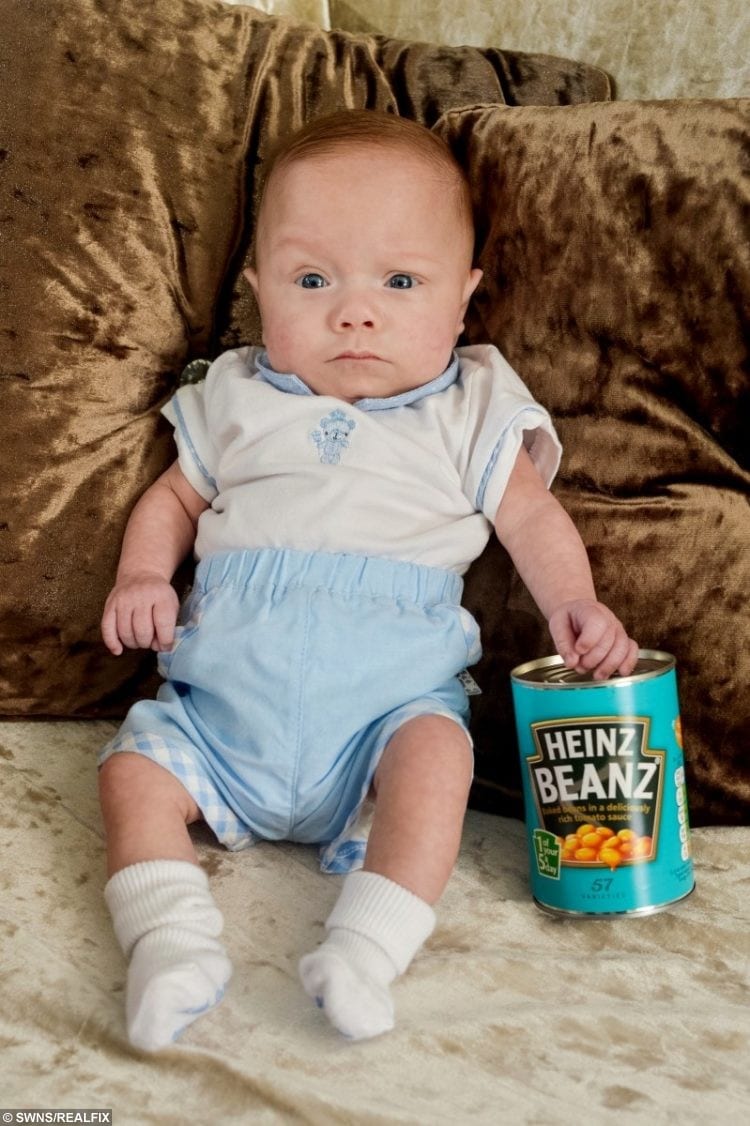 But his proud parents got to hold him properly after two weeks, and he was moved to a lower dependency ward when he was seven weeks old and 3lb.

Jay said: “He was smaller than my hand and much smaller than they even thought he would be, but doctors said he didn’t have any of the usual complications premature babies have.

“The doctor said he was about the weight of a can of coke, but even when I picked up a can, it felt heavier than Theo. 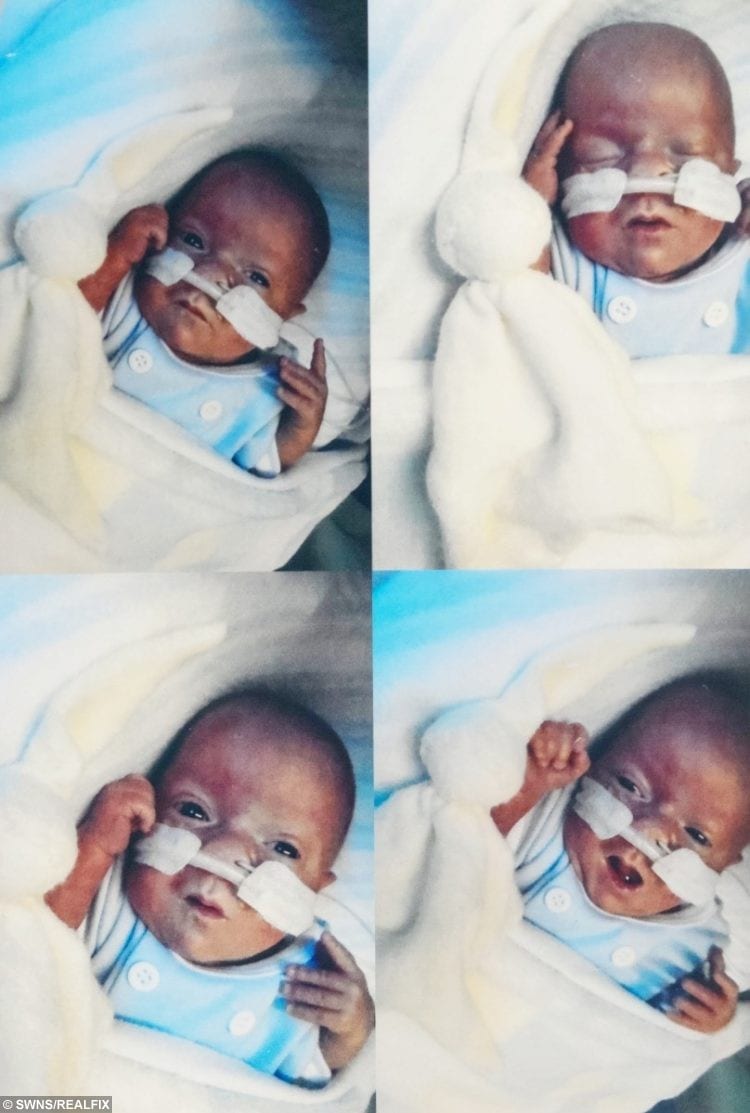 “On the day he was born one doctor said ‘don’t take for granted that you will be able to take him home’.

“But he is proving everyone wrong.

“The doctors that first looked after him came in over the weeks to see him and couldn’t believe how well he was doing.”

Theo, who was due on June 17, finally came home on July 7 weighing 7lb 4oz, after an operation to remove a hernia. 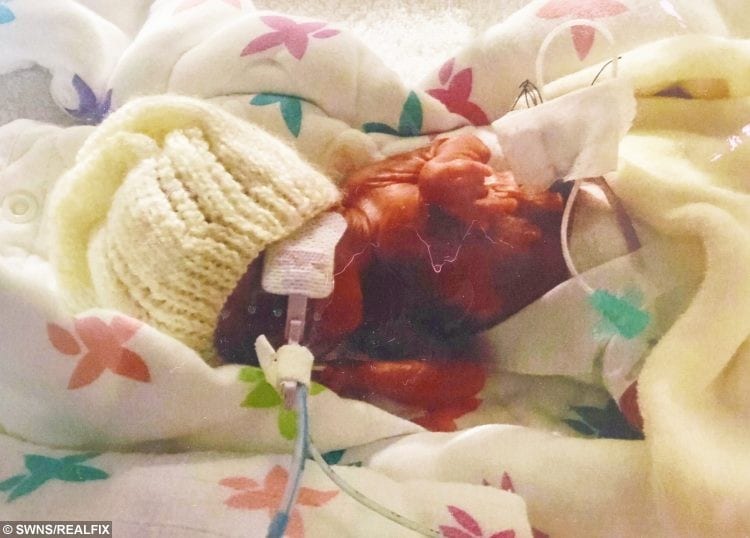 He is still on nasal oxygen at home – but not round the clock, and the stretches without oxygen support are being increased.

Doctors reckon he will not suffer any problems in the future due to his premature arrival, his parents said.

Katie said: “It’s much easier with him home now than in hospital.

“It feels like he has been with us for much longer than six months. 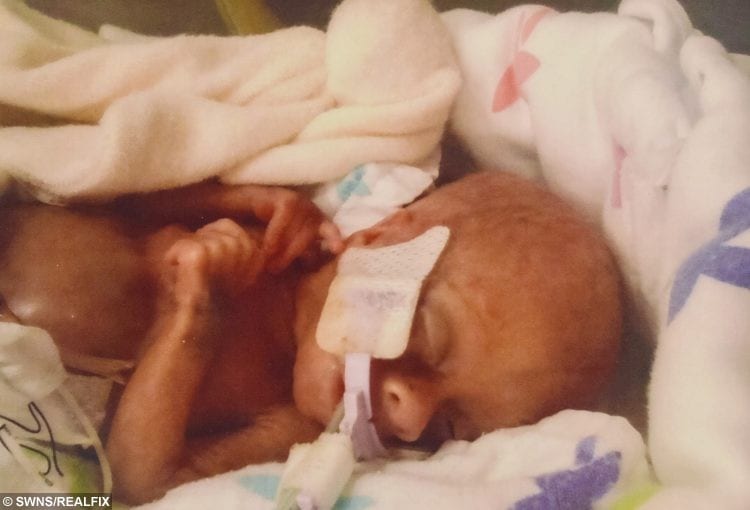 “It’s weird to think that he was the smallest baby ever as he is so much bigger than he was and is doing so well now.”

Jay, who also has a two-year-old son with a previous partner, added: “It’s quite amazing to think how he was, what he has been through, and how he is now.”

The chances of survival for a 400g baby boy is around 25% and surviving without moderate to severe brain damage is astonishingly low, at around 7%.

The previous record for the smallest baby boy born in the UK was Frankie Thompson, born in September last year at St Peter’s Hospital in Surrey, at 13oz or less than 370g. 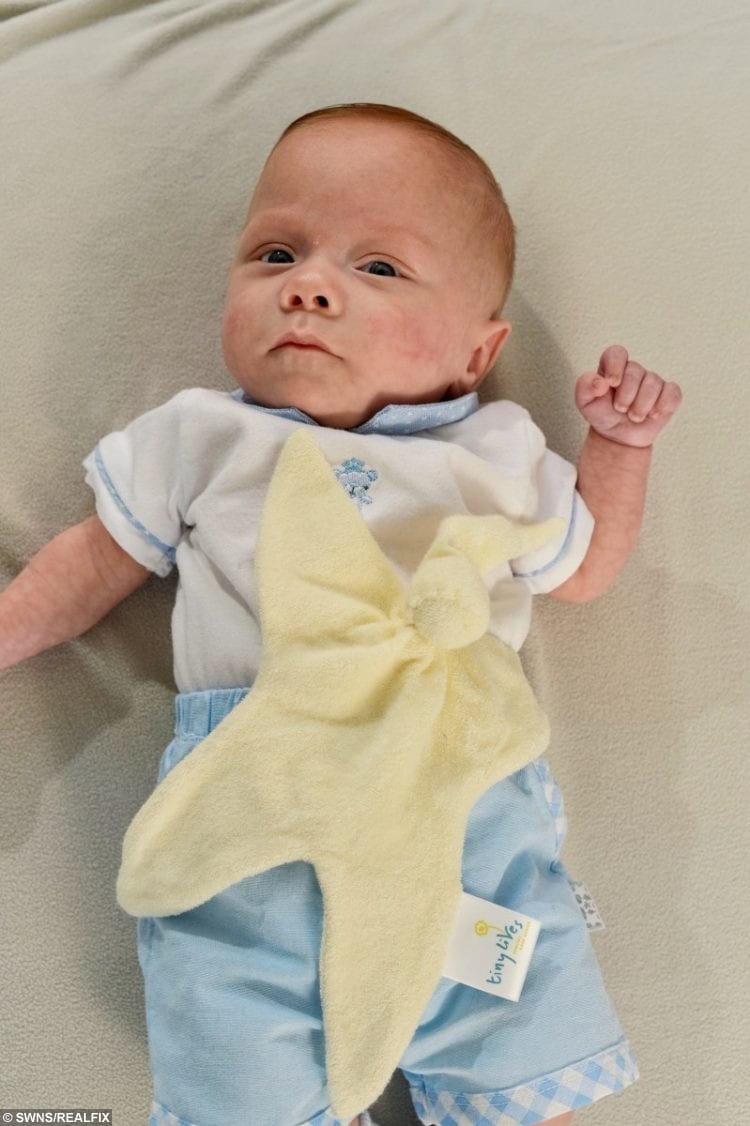 Theo’s family is raising money for Tiny Lives, a charity that helps to care for premature babies and their families at Newcastle Royal Victoria Infirmary.