A mum of surprise twins thought she was seeing double after she accidentally fell pregnant for a second time — with ANOTHER set.

Jessica Phoenix and Liam McMahon, both 23, fell pregnant with boys Harry and Elijah just six months after getting together.

Both the pregnancies were unplanned and medics told them the chances of having twin boys followed by girls was rarer than being struck by lightening.

And while the pair never imagined they’d have two sets of twins this early in life, they say they wouldn’t change a thing and their perfect family feels complete.

Proud Jessica, from Deal, Kent, said: “It might not be what we had planned when we first met but we’ve got our whole family done and dusted in the space of a few years.

“We’re the perfect family to me and it feels meant to be.

“It was four unexpected babies, but now I wouldn’t change it for the world.”

Chef Liam added: “To think that I’m a dad of four does feel pretty crazy.

“People my age are usually living at home with their mum and dad, just thinking about going out or going to uni.

“Having them has made me want to do more in my life. It makes me want to make them proud.”

The pair met at work in Wetherspoons four years ago, aged 19, and admit they “weren’t very good” with contraceptives.

Bar manager Jessica broke the first pregnancy news to Liam by joking she would have to buy him a fathers’ day card.

But while they both have twins in their families, they never imagined they’d have twins until they saw two shapes on the sonogram at the 12 week scan.

Jess added: “”I’d only just got used to the idea of having one baby when I found out it was two.

“It was a bit overwhelming. I wanted boys so I was glad to find out it was boys.

“I do feel like now with the girls I appreciate them being babies more.

“With the boys I think I was just getting used to being a mum so it felt I was always trying to keep up – doing one thing then the next then the next, whether it was nappies or bottles.

“But now I know they are fine, I know what I’m doing.

This time I know what to do.

“After the boys, we were quite happy as a family of four. I wasn’t thinking about any more kids and was very much thinking two was enough.”

Jessica found out she was pregnant again just after her sons had turned two – and while it was a shock the pair were pleased to be having ‘one more’.

She went to the scan with Liam’s sister – and just a few moments in realised it was twins when she saw the “two little blobs”.

Jessica added: “My first words were ‘oh no, not again’.

“As soon as we told people they thought we were joking; nobody would believe us.

“It wasn’t until I put a photo of the scans of both of them on Facebook that I think people really believed us.”

Jessica had heart issues and fainting episodes during the pregnancy, and since the babies appeared totally healthy, doctors decided to perform a c-section early.

Phoebe and Aria were born on September 28 via c-section, six weeks early both weighing 3lb 11oz. Both sets of twins are non identical.

“In some ways it has been easier with four than two,” said Liam

“With the boys, because we had just got together and we were so young, Jessica would get looks.

“Now we’re been together, got the boys, got a house and we’re settled.

“But having said that, when you have two toddlers and two newborns, it is a lot to get your head around.

“People do still stare, but I think we’ve got used to it.” 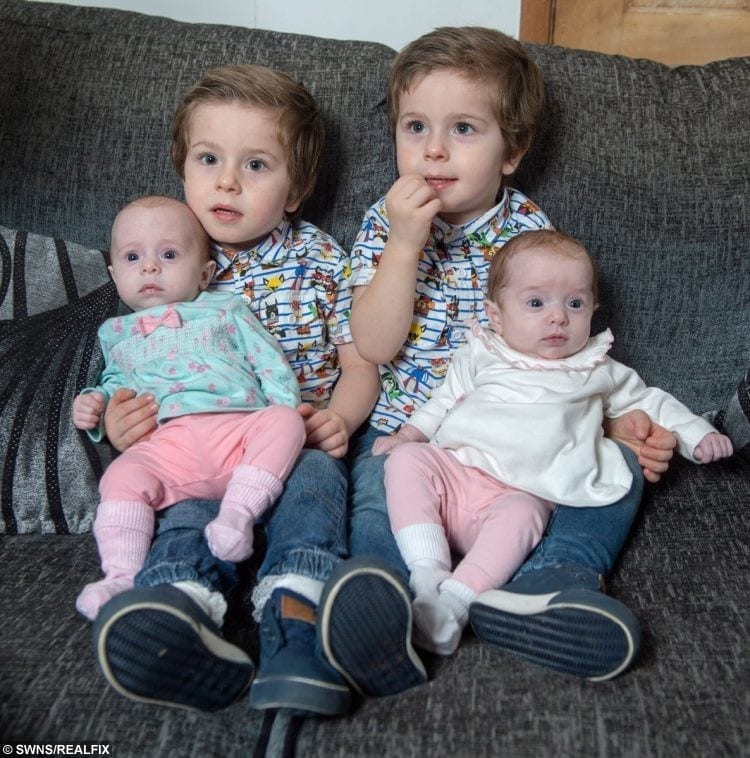 Jessica said the boys love being big brothers, and have become very protective of their little sisters.

“Bringing the girls home to the boys was a lovely moment,” she said.

“The boys are really good with them. The first couple of days it was a bit of a novelty, but we soon found our feet.

“The boys will run around and help, fetching nappies or things, and they are very protective and loving.

“The other day Harry had a little go at me because I picked up Aria and she started to cry and told me to put her down.

“They are really good big brothers.

“With the first twins we hadn’t been together long.

But this time around we’ve done it before and we were strong, so people were much more congratulatory.

“In some ways it has been easier. We had done it all before, we knew roughly how much it was going to cost and we were more prepared.

“The best thing I learned was to get in as much sleep as possible before they arrived and I started going to bed at about 7pm because I knew that I wasn’t going to get long lie ins for a very long time!”