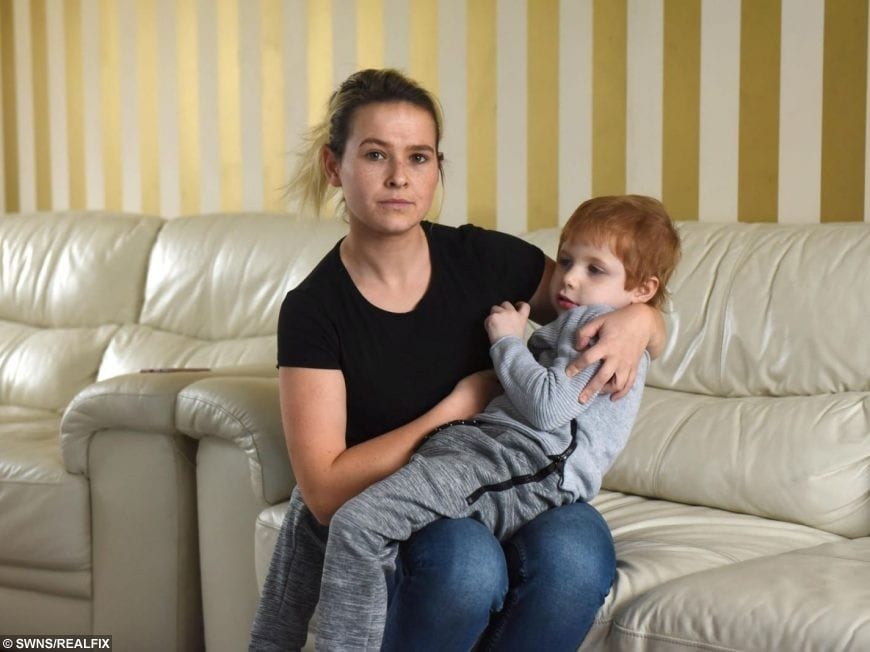 A mum says she was slated over WhatsApp by a pub employee after being told she could ‘be banned’ because her five-year-old disabled son made a ‘mess’.

Rhiannon Dunn, 26, was visiting a pub with her young son Preston, who has leukaemia and autism, and two friends when she was approached by a member of staff.

She was told by the waitress that she was not welcome as her son made a mess on a previous visit, despite Rhiannon offering to clean it up.

And now Rhiannon has seen WhatsApp messages from staff at The Greatfield in Cheltenham, Gloucestershire, bad mouthing her and calling her names.

The messages, which were sent with pictures of the mess, say “FFS and that’s just Rhiannon and two small kids”, followed by three angry emojis.

The offensive messages were sent around a group WhatsApp chat used by the restaurant staff, which Rhiannon was able to access.

Rhiannon, who visited with her friends Amy Seddon and Charlie Redding, said she felt humiliated and left.

She was appalled when she discovered later that employees had sent messages about her on their phones.

She said: “I struggle with Preston every day and we have enough to deal with without this. What happened has really upset me.”

Rhiannon, also mum to Cruze, eight, Kayden, three and Carlson, 13 months, said Preston can be untidy with his food due to his disabilities.

She would often take him to The Greatfield at lunchtime as it is quiet, giving her a chance to get out of the house.

“On that day I was with some friends and when we got there I was called to the side by a waitress,” said Rhiannon.

“She said if I came back in with Preston, we would be banned as he makes a mess with his food.

“It’s meant to be a child friendly pub.

“He’s a child with a disability. He’s sensory with his food and plays with it, sometimes he throws it on the floor. He isn’t able to communicate.

“When he’s made a mess I’ve said I would clear it up.”

A year ago, Preston was diagnosed with leukaemia and he is having chemotherapy at the moment.

In February he fell seriously ill with sepsis and a collapsed lung, when Rhiannon and her partner Jake, 29, feared the worst.

The youngster has just finished steroid treatment as he continues his battle against cancer.

“Despite everything he is a gentle giant and a lovely boy, he loves Peppa Pig” said Rhiannon.

“No child should be treated differently. He has enough to deal with and every day is a struggle for him.”

A spokesperson for The Greatfield said the matter is being investigated.

“We’ve spoken to the guest and have apologised for any offence that has been caused,” they said.

“We pride ourselves on being a friendly, welcoming pub, and do not tolerate any sort of offensive behaviour.

“We are very disappointed she has been made to feel this way and are taking this matter seriously.”