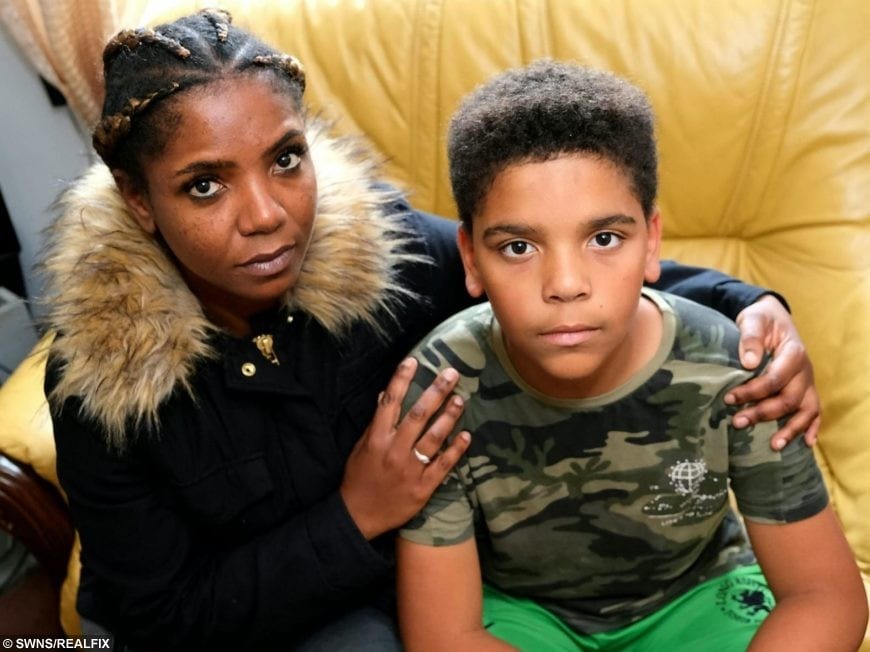 A horrified mum says her teenage son had hair ripped out in an alleged racist attack by a 14-year-old girl and her friends – filmed on a mobile phone.

Arthur Fellars was walking home when a female jumped out from behind bushes and repeatedly shoved him over – yanking a large chunk of his hair out in the process.

Two other boys then allegedly called Arthur a ‘n*****’ and told him to ‘go back to his own country’ during the terrifying ordeal captured on camera.

The incident at around 8.30pm on June 21 in Bristol has been reported to the police who confirmed they were investigating.

Mum Mabel Khan, 38, said: “Arthur is saying he is too scared to go out of the house.

“I am shocked and disgusted.”

Arthur, who is mixed race with African heritage, enjoyed a kickabout on Friday evening with two friends – boys aged 14 and 15 – in a nearby park.

While he walked home with the two boys, a girl described as six feet tall and heavily built allegedly jumped out of a bush and attacked him.

Another girl allegedly filmed the incident, while two other boys in their late teens hurled abuse at Arthur, Mabel says.

“They were telling him to go back to his own country and saying he was a n*****,” she added.

“The girl grabbed him by the hair. She bent him over, shoved him into a bush, lifted him out and shoved him back in. She did this four times.

“The girl ran off when she saw Arthur’s friends were filming her. Arthur was left with a sizeable bald patch and a bad back.”

Mabel added that Arthur had pain in his head after it was allegedly pushed into the bush.

She added: “I asked him what the worst part was, and he said it was the racial abuse.

“I told him, ‘You have done nothing wrong. You are a victim.’

“This is the first time he has been physically targeted because of his race. He has been called a chocolate brownie by kids in Long Ashton before, but nothing like this.”

Avon and Somerset Police confirmed they are investigating the alleged assault.

A spokeswoman said: “The boy said he was pushed into bushes and had his hair pulled.

“Anyone who witnessed the incident is asked to get in touch through www.avonandsomerset.police.uk/contact, or by calling 101, quoting reference 5219139694.”