Ann Banks (80) from Wigan, who got the Worker Bee tattoo in tribute to the victims of the Manchester terror attack.

This is the moment an 80-year-old pensioner proudly shows off her first ever tattoo – a bee emblem in tribute to those killed during the Manchester terror attack.

Ann Banks felt “heartbroken” following the nail bomb massacre last month and decided to have the motif inked on her right wrist.

The retired shop assistant was in the chair for around 15 minutes and described the first needle pricking her skin as “painful”.

It’s believed Ann, from Aspull in Wigan, Greater Manchester., is one of the oldest people in the UK to have the inking, according to close family.

The worker bee was adopted as a motif for Manchester during the Industrial Revolution.

Ann said: “I was sat watching the television and I was so upset about what was going on in Manchester, all these people getting killed, I just decided to have a bee tattoo done.

“Something in my head told me I had to have the bumble bee done, so I made up my mind that I was going to have it done and there was no turning back.

“I went into Wigan to have the tattoo done, my granddaughter took me. We had to make an appointment because there were so many people wanting it done.

“As I went into the shop I saw this lady sat down having the sleeve done.

“When I sat down this lady excused herself and came over to me and said ‘don’t have your tattoo done there {top wrist}, have it done there instead {underneath} because it’s less painful’.

“I took her word. It didn’t take anymore than 15 minutes to have it done but it felt like a lot longer.

“When they started off and put the first needle in I looked up at my granddaughter and said ‘you didn’t tell me it was going to be like this’ because it really hurt when the first needle went in.

“But I calmed down because I knew I had to have it done.”

She went to the Soul Ink Tattoo Studio in Wigan, Greater Manchester., last Thursday with her granddaughter Laura Banks, 26.

She said today : “I am so proud of my Gran for what she did.

“She could have just donated money but she went right out of her comfort zone on this occasion, so that she can show people that she is a part of what happened.

“I knew she was a bit nervous so I told her before we went that the 10/15 minutes of pain she will go through having the tattoo is nothing compared to what the families and victims have had to go through and this kept her focused.

“I hope that she can put a big smile on people’s faces.”

Laura posted on Facebook (sic) hours after her gran had got the tattoo last week: “She’s never liked tattoos and certainly never had one, but what happened last week really broke her heart and with the history of the bee she wanted to show her support!

“80years old and having her first tattoo to show her respect and contribute towards the victims and their families.” 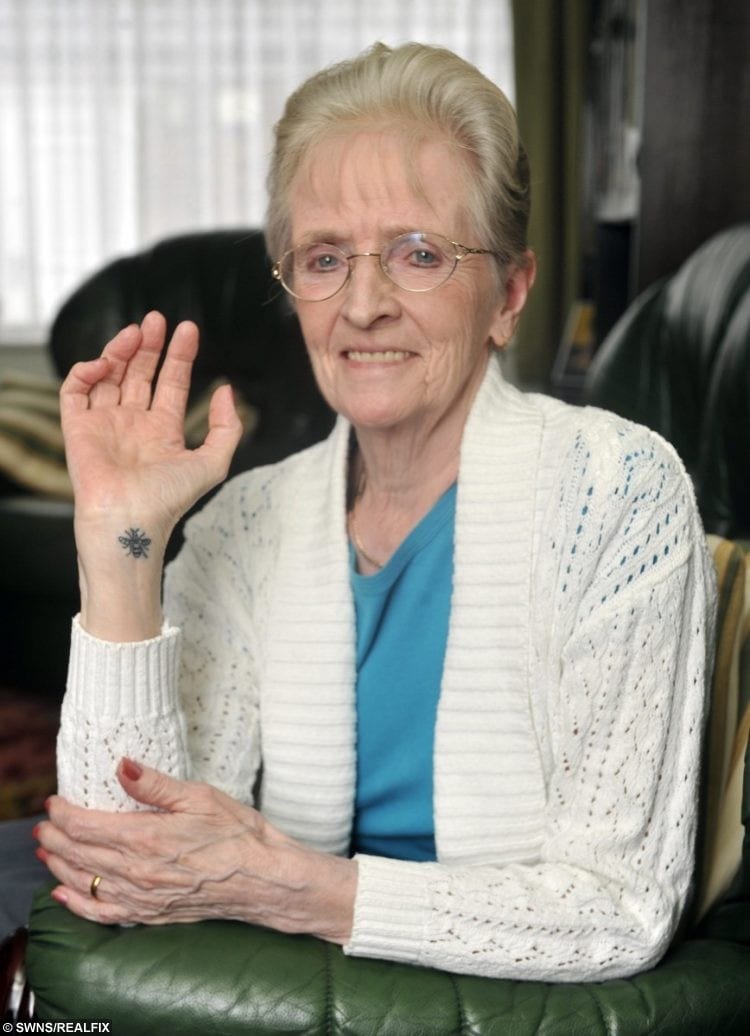 Twenty two people were killed and more than 100 were injured in the horrific attack by Salman Abedi, 22, as crowds were leaving a concert by US Pop star Ariana Grande at Manchester arena.

Although it was launched by tattoo artist Sam Barber, the initiative has spread throughout the UK and beyond, with tattoo studios in Bristol, Glasgow, and allegedly Australia taking part.