Hair salons and barbers in Cornwall have been receiving hand written poems signed by a Mark Jones and delivered by Royal Mail on a weekly basis for around the last six weeks.

A mysterious wordsmith has been dubbed the “Banksy of Poetry” – after dropping anonymous LOVE POEMS into hairdressers and barbers all over the country.

Bridge Street Barbers and Inkfish, both in Truro, Cornwall, and Yume in Cardiff, are the latest to be baffled by the arrival of the handwritten verses in their post.

The poems all appear to be love poems, and are written in silver ink on black card and ended with the phrase, “Keep your chin up, keep smiling”.

Reports of the poems have been surfacing from hairdressers and barbers for several years, with the elusive author signing off M Jones or Mark Jones.

They arrive in envelopes with Lancashire postmarks – but nobody seems to know who the author actually is.

Anne Westgarth, of Bridge Street Barbers, is one of the latest people to be contacted by the elusive poet, and said she was unaware that he was a nationwide mystery.

The salon has been discovering his poems in with their post every week for about six weeks, with the most recent ones taking on a festive theme.

She said: “It is just lovely. The poems are absolutely lovely. They are really well written, it is heart-warming, especially in the run up to Christmas.

“It really makes our week, wondering what the poem is going to be. To take the time out of his day to do this is so nice.

“The first time I got one I thought, ‘How odd’ and wondered if it was a customer but no one knew who it was.

“I was talking to another hairdresser in town and they said they had received one too.” 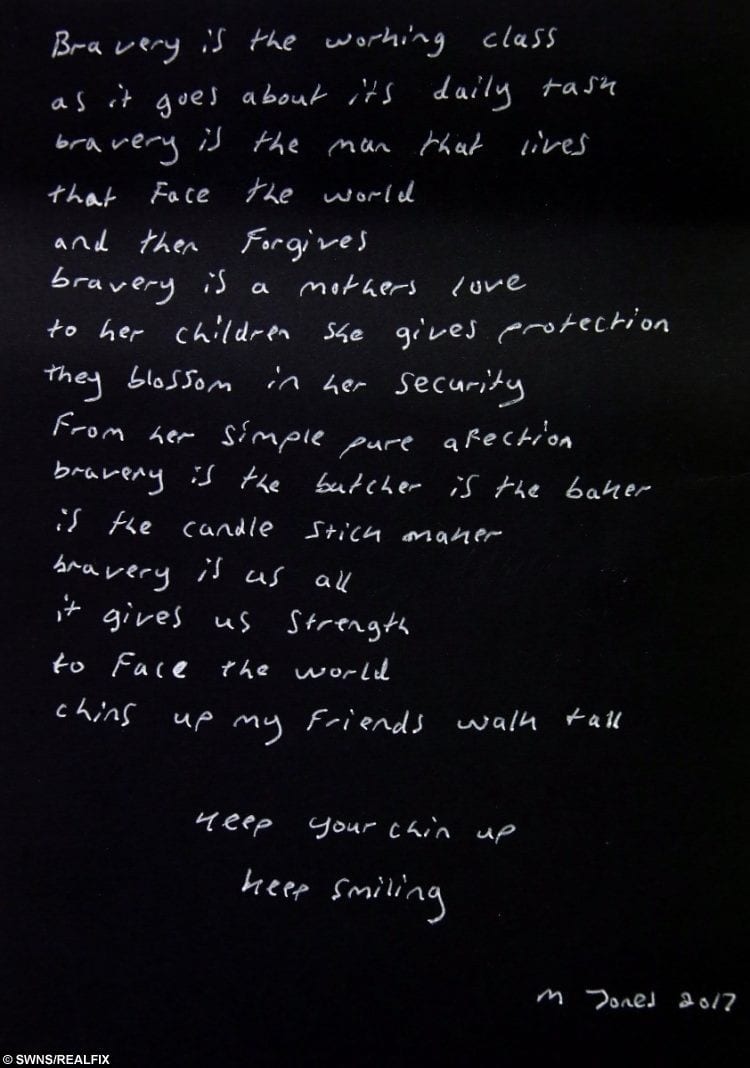 She added that she is really keen to solve the mystery of who is behind the poems.

“I have posted pictures on Facebook and Instagram in the hope someone may be able to try and solve it,” said Anne.

Tegan Edwards, receptionist at Inkfish in Quay Street, said the arrival of the poems was “very random”.

She said: “When we got the first one we thought they had sent it to the wrong person. But it is very sweet. They are very nice, all about values and respect.”

“He is a very talented writer and it is much appreciated that what he is doing is bringing a little bit of joy. The staff do talk about it and wonder what we will get next.”

And Giovanna McCarthy, owner of Yume in Cardiff, said in 2015 that she her salon had received two poems from M Jones – and that she was initially a bit dubious.

She said: “It’s just so strange. When I opened the poem I had no idea that this was something happening across the country.

“I could have easily said, ‘Oh this is rubbish’ and popped it in the bin.

“Because of the tone of the poem I found it a tiny bit creepy.

“But when I told some of the staff, they suggested I Google the name and that is when we discovered lots of other people, mostly hairdressers, had received them.”

Giovanna added: “Other people have framed them, so we might do something similar.

“It’s definitely a great talking point and I feel really curious as to who is behind this.”