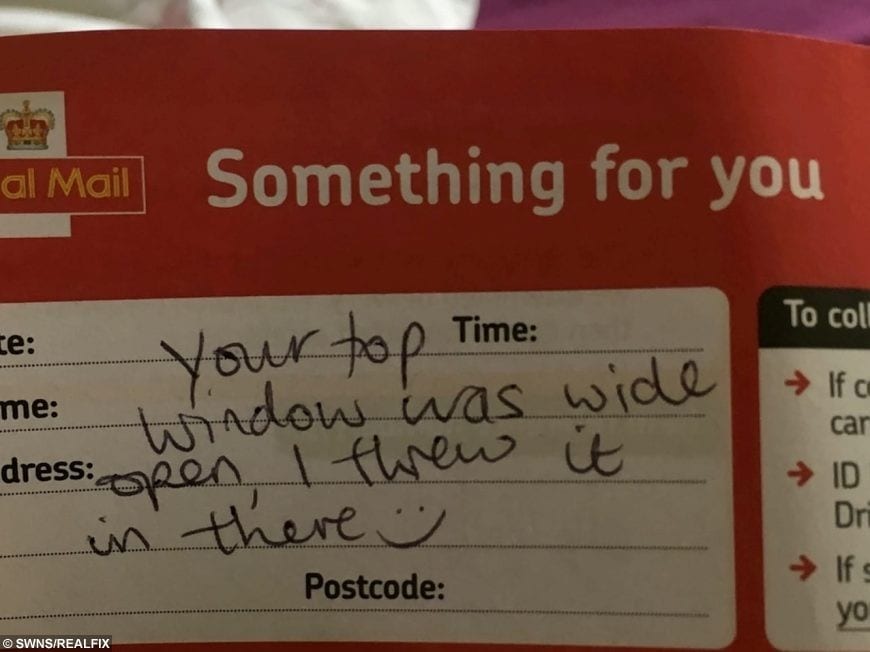 A postwoman has been hailed an ‘impressive shot’ after she hurled a parcel through an upstairs window when the homeowners were out – and managed to land it on the bed.

Laura Chaisty found a red ‘sorry we missed you card’ when she got home from work – with ‘your top window was wide open, I threw it in there’ written on it.

Laura, 27, a coffee barista, was not expecting the parcel which contained her partner’s gym supplements, but was in hysterics when she realised what the postie had done.

She was “shocked” when she found the Royal Mail parcel had landed perfectly on her bed, at the home she shares in Faringdon, Oxon., with her fiancee Dale Townsend.

After finding the parcel just after midday on July 11 Laura posted a message on a local Facebook page to identify the mystery thrower who had “made her day.”

The anonymous postwoman, who fears disciplinary action, came forward to tell Laura, that she had hit the target on the first attempt.

The postie told Laura she could tell the parcel’s contents were not fragile because of its shape and light weight.

Laura said: “It was just hilarious.

“I was shocked because of where it had landed.

“And from the angle she threw from it must have been an impressive throw.

“She would have had to get the parcel underneath the window and not through it.

“I just shared the story on Facebook and Snapchat and now it has thousands of views. I can’t believe it.

“In 27 years it is one of the funniest things that has happened to me.”

Laura’s partner Dale, 26, was “pretty impressed” when he heard what happened.

He joked that it was his parcel that led to almost eight thousand shares on Facebook.

Laura said bricklayer Dale has a habit of leaving the windows wide open all year round.

She added: “I try to get him to close them but he carried on doing it.

“But now thousands of people have read our story he has finally agreed to shut the windows when we leave the house.

“Postie’s get a lot of bad press these days, especially those who work on a pay per delivery basis, so it is nice this happened.”

A Royal Mail spokesperson said: “We are happy to hear that this customer received her parcel safely in this instance.

“However, we do ask our postmen and women to adhere to our established procedures for delivering items of mail, in order to keep the items we deliver safe and secure.

“We will be reminding our staff in the Faringdon area of this.

“Any customers with concerns about their mail should contact Royal Mail Customer Services.”