A primary school has become the first in Britain to allow pupils to wear SLIPPERS during lessons.

Findern Primary School say the switch from shoes has become so popular that even some TEACHERS have chosen the comfier option in class.

The school introduced the idea after spotting a 10-year study which found that children who learn with no shoes are more likely to behave better and get good grades.

Deputy headteacher Michelle Hall said they have already noticed improvements in pupils who wear slippers at the school in Findern, Derbys.

She added: “One of the teachers suggested the idea after seeing some research, and when we pitched the idea to the children they were very excited.

“It has been a success so far, most of the children and even some members of staff are wearing slippers now.

“Our pupils are already very well behaved but there have been some changes.

“There is less stomping around and the pupils are a lot calmer and seem very relaxed.

“The children love it and that’s why we do our jobs, with them at the heart of everything.”

Pupil Maisie Futcher, ten, added: “I think it’s a great idea because I love wearing my slippers at home, so wearing them at school makes me feel relaxed and helps me to learn.

“When we found out it was going to happen everyone shouted ‘yes’ and we all love it.”

The move – which was introduced two weeks ago – has so far received a mixed reaction from parents.

Mum-of-two Laura Hall, 44, said: “I think its a fantastic idea. Its something which is done widely in other parts of the world and been a success.

“You don’t want to be uncomfortable all day especially in a learning environment.

“Anything that is proved to aid learning, I’m all for.”

But one dad, who did not wish to be named, added: “School sets you up for the world of work and uniform is a big part of maintaining standards.

“I think this is a load of new age nonsense and I can’t see how allowing slippers in the classroom is going to benefit anybody.

“You see all these teenagers going to Tesco is their pyjamas and this kind of policy just encourages that sort of slobbish behaviour.”

A 10-year study at Bournemouth University study covering 25 countries found it created a calmer and quieter environment when students removed their shoes at school.

Boffins also found children are more likely to get to school earlier, leave later and read more – with the move even reducing bullying in some classes.

They found that by removing shoes, classrooms were quieter which provided a calmer atmosphere where pupils were more willing to engage in learning activities.

The slipper system is widely used in Scandinavia where cold weather means that children take their snow boots off before entering the classroom. 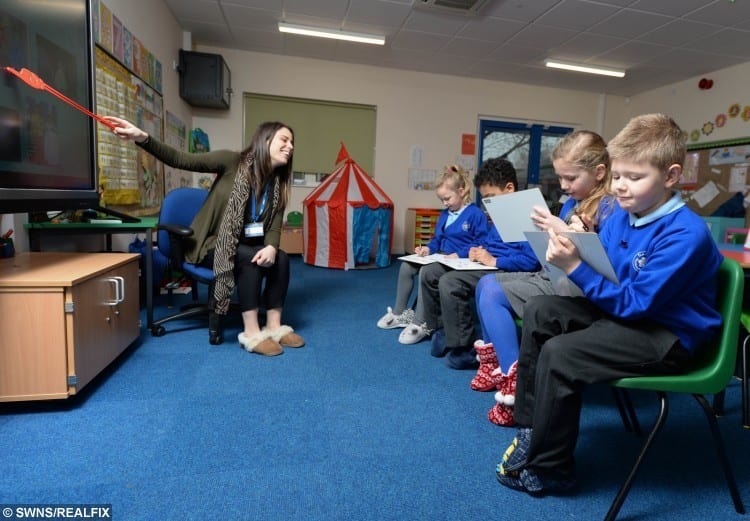 Headteacher Emma Titchener added: “I was aware of the research previously and we had considered it and then one of our teachers tried it for a day and noticed quite a big difference.

“So we thought we would trial it and so far it seems to have made a big difference.

“The children are really happy to do it.

“Even though everybody is well behaved it seems that the children feel more comfortable.

“The idea wasn’t a gimmick, there is serious educational reasons behind it.

“We are doing it because the children are more receptive to learning at a faster pace when they are comfortable.

“In our school the philosophy is that if it makes a difference to their outcomes and performance then it is worth doing.

“At the moment it isn’t compulsory but from September it might become part of our uniform policy if the trial is successful.”

She added that the “vast majority” of pupils were now wearing slippers in school.

She said: “The pupils come in their shoes and get changed into their slippers first thing.