Oscar, Piper and Harvey are seen using the stand up desks at Kewstoke Primary School

A primary school has introduced an unusual way of improving their students’ learning and health – with STANDING desks.

The school is the fifth in the country to start using the specialist desks which have quickly proved a hit with the youngsters.

Headteacher Sarah Harding decided to buy them after reading how some children learn better when they are standing up and more active.

The desks, each costing £160, were funded through the school’s sports premium grant, which promotes healthy and active lifestyles for students.

Research claims that using a standing desk for just three hours a day, five days a week, burns an additional 30,000 calories over a year – akin to running ten marathons.

Kewstoke Primary School, near Weston-super-Mare, Somerset – which has just 85 pupils – started using them three weeks ago.

Mrs Harding said she is already noticing an improvement.

She said: “I was watching a lesson the other day when one of the children walked over and started to work at the standing desk.

“His work has improved by using a standing desk. He told me that it was much better for him using it as he felt he was not tied to a traditional desk environment.”

She added: “We believe in a learning without limits ethos. We’re only a small school, so we like to let the children choose how they learn best.”

The specially-designed standing desks are attached to existing desks and convert them from sitting to standing in seconds.

Kewstoke Primary now has three of the desks in place – one in each of their classrooms.

Mrs Harding added: “They’re proving popular so far and we haven’t had any problems yet with pupils wanting to use the desk at the same time.

“A lot of the time pupils will get up and use the desk just for five minutes, to stretch their legs.

“But I also saw a pupil the other day use the standing desk for almost 20 minutes, while they were doing a piece of writing work.” 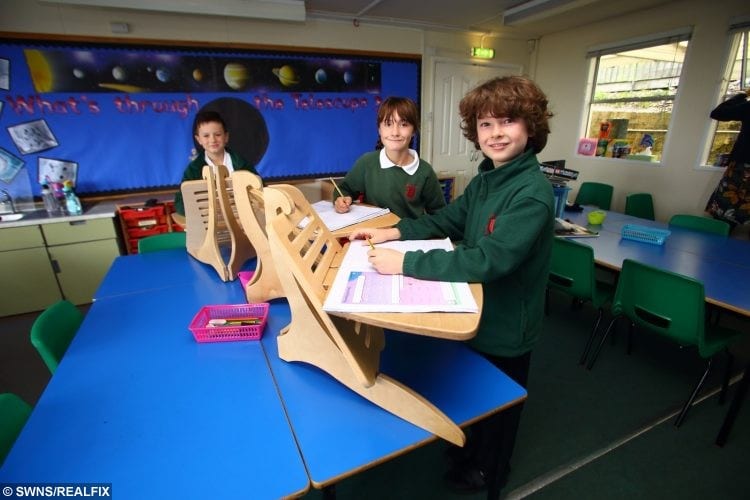 She explained: “We wanted a way where we could encourage children to keep working at the same time as allowing them to be more physically active.

“The desks are about allowing children the flexibility to learn how they want to.”

Mrs. Harding said the school was open to increasing the number of standing desks they have if they continue to prove popular.

“We have children in school who learn better and have improved concentration levels when they are active,” said Mrs Harding.

“The desks also promote a healthier lifestyle by just allowing children to move from the traditional sitting position.”

Standing desks first hit the UK in January and are now becoming common in many offices with many people holding meetings standing up.

Nick White, managing director of suppliers I Want a Standing Desk, said: “The great thing about this equipment is that it can convert a sitting desk to a standing one in seconds.

“They were designed with the education marketplace in mind due to the issues surrounding inactivity in children and promote more healthy lifestyles.”

Research shows sitting down causes the metabolic rate to crash, with the body only burning one calorie a minute – less than chewing a piece of gum.

Studies have also revealed sitting more more than six hours a day makes you up to 40 per cent likelier to die within 15 years than someone who sits less than three – even if you exercise.