Princess Eugenie’s godmother has been reported to police after she allegedly attacked an anti-hunt campaigner – with a WHIP.

Footage appears to show Lulu Hutley, 56, joint master of the Surrey Union Hunt, lashing out at the male activist with a riding crop.

Saboteurs say the video was filmed while they were monitoring the huntsmen during a meet in Bramley, Surrey on Saturday afternoon.

Tempers flared when members of Guildford Hunt Saboteurs followed the riding party onto private land because they “suspected they were illegally hunting”.

Protester Conor Macleod, who is in his 20s and was wearing a backpack, became trapped between a horse and a gate.

The footage then appears to show Hutley, wearing a distinctive Surrey Union master’s collar and riding gear, raise her arm and strike.

The 55-year-old, of Dorking, Surrey, said: “The saboteurs followed them on private ground because they suspected they were illegally hunting.

“They were asked to leave and they tried to make their way back.

“Conor, the lad who was hit, got jammed between the fence and Hutley hit him over the shoulder with the whip.”

He added: “She lost her rag on the day. She lost her temper because they tried to hunt without us.

“Most people would find it shocking but it is part and parcel of hunts around the country. It has been a violent season.”

The Surrey Union Hunt claims the clip has been taken out of context and that the hunt saboteurs, some of whom allegedly wore masks, were intimidating.

They said: “You can clearly see Lulu is holding the whip upside-down in order to hit the gate, not the person.

“She saw the protester was trapped between the horse and the gate and was trying to make a noise by banging on the gate to get the horse to back off.”

Hutley, a close chum of Sarah, Duchess of York, 57, and is godmother to her daughter, Princess Eugenie of York, 26.

She married property businessman Edward Hutley, 54, in 1991. The Surrey Union website states the couple are joint masters of the hunt.

Her father-in-law, Peter Hutley OBE, is an evangelical Christian who launched an annual Christmas Nativity in the grounds of his Wintershall Estate in Surrey.

Guildford Hunt Saboteurs said police have launched an investigation into the claims.

Footage of what happened has been supplied to officers.

Surrey Police said it is investigating reports of a common assault at a hunt in Bramley on Saturday.

They said: “Officers were called following reports of an incident near Thorncombe Street around 1:30pm.

“A man alleged he was assaulted by a man and a woman following a verbal altercation.

An investigation is underway and enquiries remain ongoing.” 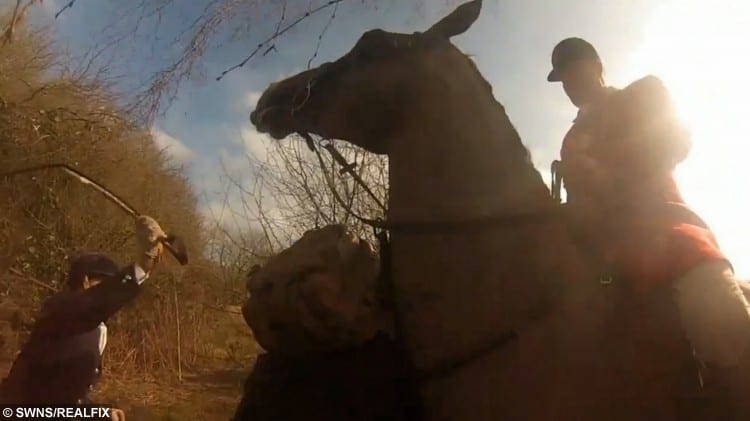 Surrey Union Hunt said: “You can clearly see she is holding the whip upside down in order to hit the gate, not the person.

“She saw the protester was trapped between the horse and the gate and was trying to make a noise by banging on the gate to get the horse to back off.

“It was quick thinking by one of our Masters in a dangerous situation and it’s terribly sad it’s being misrepresented.

“As always, we were following an artificial scent trail, and indeed the protesters would have seen this being laid down by a rider earlier.”

Homeowner Threatened With Legal Action After Paving Over His OWN Lawn

Homeowner Threatened With Legal Action After Paving Over His OWN Lawn