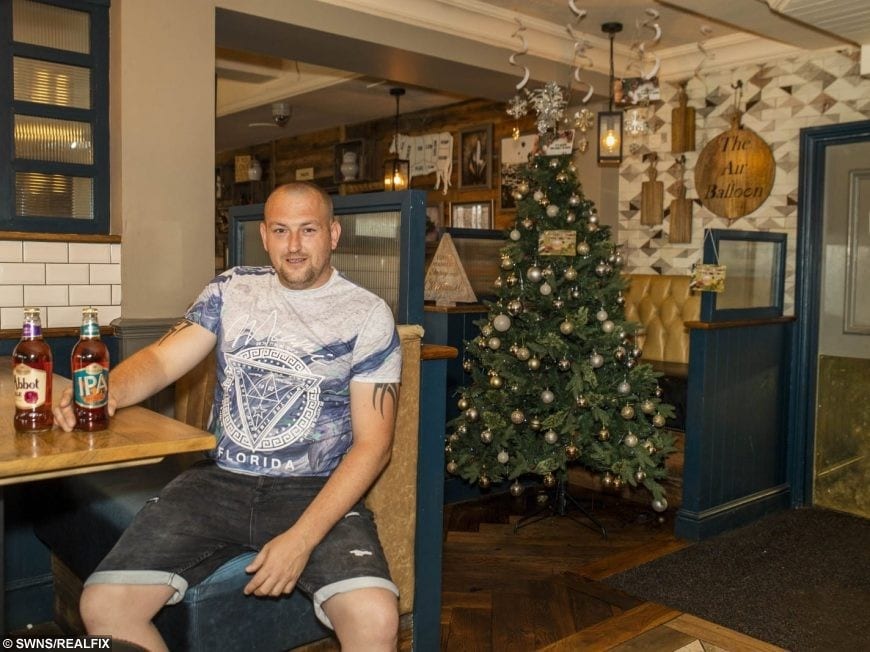 A pub has become the first in Britain to put its CHRISTMAS tree up – on the hottest day of summer.

The five-foot artificial tree, adorned with gold, blue and silver baubles, has been installed at the Air Balloon pub in Bristol.

The display – as Britain bakes in 37 degree heat – is complete with a sign at the foot of which reads: ‘Have yourself a merry little Christmas’.

And its lights are flashing brightly as it stands beside the bar.

Its the third year in a row the boozer in Filton, South Glos., has put up the tree early- and excited regulars have been anticipating its arrival since the start of July.

Manager Joanne Johnson said the tree puts a smile on the face of pub-goers and is great for business because it boosts early Christmas bookings.

“This is the third year in a row we’ve had the tree up and we never get any negative comments about it.

“Regulars have been excited asking us when the tree is going up because last year we had it up a little earlier.

“We’ve already had a few bookings for Christmas parties and Christmas lunch as a result – it’s where the idea comes from.

“We like people to know we take bookings for Christmas as we do fill up really quick.”

In a post on their Facebook page, the Air Balloon wrote: “21 days late but the 🎄 is up!

A spokesperson for the Air Balloon said: “Christmas is the biggest occasion of the year and it’s never too early to start planning.

“Many of our guests tell us they want to book in advance to avoid disappointmentso we’ve recently put our Christmas tree up to highlight that our Christmas menus are now available.

“Already we’ve had enquiries and bookings for Christmas Day.”

Regular Terence Jones, 83, a mechanic, said of the tree: “It’s a bit early but it’s a good bit of fun and gets people talking.

“The pub management do a great deal of charity work for the community and we respect them.

“It gets people talking.”

“That’s just my opinion – some people like it some don’t.

“My grandkids are six and nine now but if I brought them in when they were a bit younger, they’d get confused and be asking for presents thinking it’s Christmas.”

Sabrina Knight wrote online: ”Really? It’s not even been Halloween yet 🤦‍♀️”

Last year, locals were asked to buy presents and place them under the tree for children in care.

Regulars bought around 80 gifts which were donated to the children at a local care centre ahead of Christmas Day.

It was so popular, each child received two gifts.

Manager Joanne said: “The home gave me a list of children – not their names but their genders and ages.

“I then made a tag for each and placed them on the tree.

“People were asked to buy presents as a donation and it was popular we are doing it again this year.

“They wouldn’t have had any gifts if it wasn’t for the regulars here.”