Quintillion to one! : Dad stunned after he cracks open ten double yolkers in a row

A family man beat huge odds when he cracked open TEN eggs only to find they all had DOUBLE YOLKS.

John Landy, 40, was totally gobmsacked when he cracked one egg, then another and another until he finished the box and realised they were all rare double yolkers.

The odds of finding ONE of the these scarce eggs is said to be 1,000 to one, so the odds on finding ten – in a row will be staggering.

Dad-of-two John, said: “When I got one double yolk, I was quite surprised because I had never see one before.

“I opened another one and that was one. We were having four eggs and they were all double yolkers. I sent my wife a picture.

“I decided to open the rest of the eggs and they were all double yolks.

“I was really surprised. I couldn’t believe it. My mum had a double yolk once but I had never seen one. To keep opening them, I was gobsmacked.”

John and wife Kerry had bought a box of a dozen large free-range eggs from a Morrisons near their home in Wigan, Lancs.

Kerry had already used two of the eggs, but did not pay attention to whether they had double yolks.

Since their discovery, the couple have checked out how rare it was to get so many double yolkers and wanted to find out if the eggs were valuable.

“My wife said to keep the eggs in case they were worth anything. No-one would believe us once we had had them.

“We took a picture of the eggs and the serial number on the box.

“We had some on Saturday morning and put the rest in the fridge.”

The couple, who have two children, Kieron, 19, and Daniel, 11, shared photographs of the eggs on social media and tagged Morrisons. 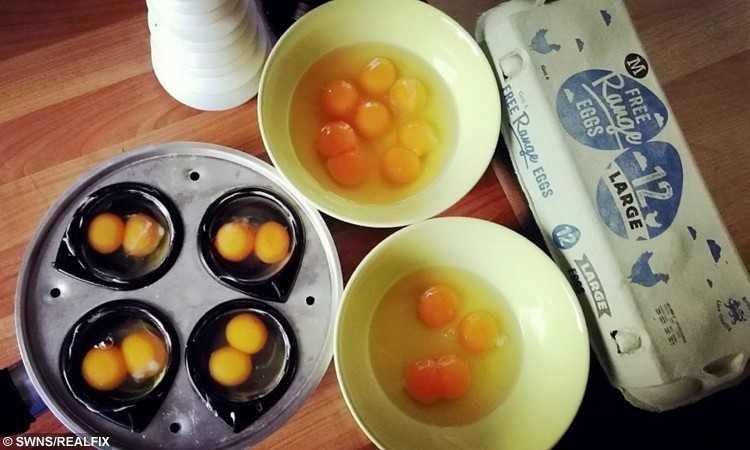 They ate their poached eggs with beans and toast, John added: “They didn’t taste any different. We haven’t been ill so fingers crossed there was nothing wrong with them.”

Of course, after the excitement of finding all the double yolkers, the family had ten of them to get through.

John said: “I broke all the eggs in a bowl and we ended up having eggs that day and eggs the next day and throwing four away.”

Part of their research online revealed that double yolkers can be a sign of either good luck or bad luck. So they decided to buy an extra lottery ticket that day.

Unfortunately they did not win, but John said he was delighted the following day when a pack of six rashers of bacon turned out to contain seven rashers

According to the British Egg Information Service, the chances of finding a double yolker is less than 0.1 per cent.

Theoretically, the odds of finding ten double-yolk eggs in a pack of ten is a staggering quintillion to one – that’s one followed by 30 noughts, according to statisticians.

However in reality the odds are shortened because of the circumstances in which double-yolk eggs are normally found.

“So if you find one double-yolk in an egg, your chances of finding another in the same box go up.”

The accepted odds are that one egg in a 1,000 laid are double yolks.

One In Ten Volunteers Meet Their Significant Other On The Job