An army of caterpillars have given residents the creeps by spinning a huge 20ft web in a residential street.

The hungry insects have blanketed a bush to cocoon their chosen feeding plants and protect it from predators.

But the spooky sighting has baffled residents after the enormous web appeared from nowhere.

Kate Arnold, who spotted it on her way home from work, said: “When I drove past it I had to stop and have a look.

“Insects don’t really creep me out and I was so intrigued to see this.

“It’s so surreal, I have never seen anything like it before, when I got out the car I expected a 20ft spider like the one out of Harry Potter to be there. 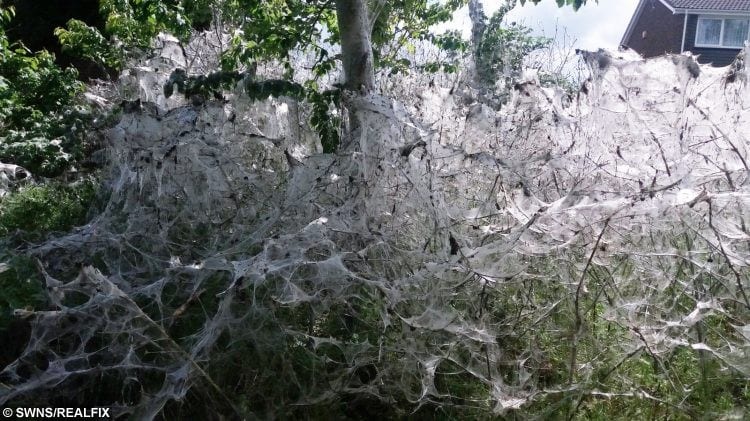 She went on to say: “At first I thought it would be spiders, but when I went to have a look I realised that it was caterpillars.

“I have done so research and I don’t think that there aren’t many sightings of webs this big in the UK which is really strange.”

It’s thought the web, which looks like it could be made of plastic, was created in Luton, Beds., over the last couple of weeks.

Resident Brian Platon, 40, first spotted it on Monday whilst walking his dog.

He said: “When I saw the webs it did freak me out a bit. When you look up close you realise that it is thousands of caterpillars that are crawling around in the bush.

“I called an ecologist who went and had a look and identified it as ‘Spindle Ermine’, a fairly common Caterpillar.

“They aren’t harmful and they will soon turn into moths and populate the district.” 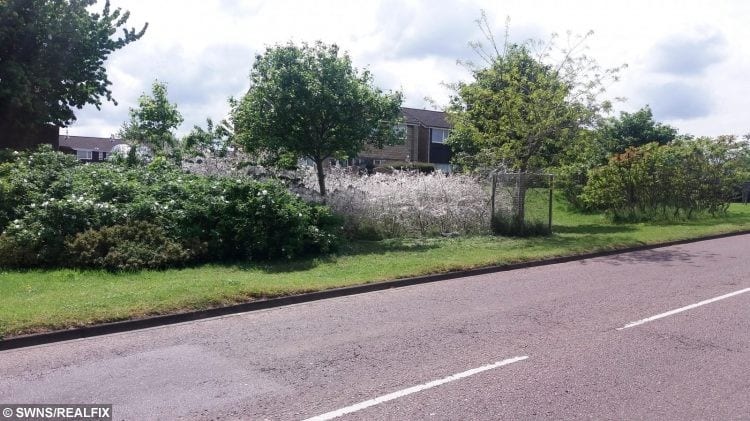 Spindle Ermine caterpillars are fairly common throughout Britain, with their bodies being mostly white.

It’s expected they will move on from the site in a number of weeks.

According to The Royal Horticultural Society, several species of moth have caterpillars that live within sheets of extensive webbing on plants.

The webs tend to occur in trees or hedgerow, and are designed to protect the caterpillars and their food.

Several large-scale infestations have made the news in the past, including a 20ft moth web which was spotted in bushes outside Belmarsh Prison in East London in 2012 .