Residents Protest Against Potholes By Filling Them With Rubber Ducks

Residents in a picturesque village are protesting against potholes by filling them with RUBBER DUCKS.

They are also a hazard to pedestrians – and ruffled villagers in Steeple Aston, Oxon, have come up with a quackers approach to highlight the issue.

It created a stir in the village with locals and passing motorists drivers cheering in support.

Helen said: “So many people have been complaining about the issue that we thought we could do something about it.

“Martin helps at a charity called Young Hearts and just happened to have 100 rubber ducks in his house, so we decided, why not?

“We all met up with a bag of ducks and because it was raining the potholes were filling up which was perfects for the ducks to have a swim.

Helen has lived in the area for five years and said that although it is a bit of fun they hope that they can solve a serious issue.

She said: “We are now trying to encourage other people in Oxfordshire to borrow the ducks and do the same thing.”

Fellow resident John Adriaanse recently tripped on the potholes on his way home from the shop and found himself on the floor.

The 73-year-old said: “I misjudged the pothole and my foot hit the puddle and I sprawled and fell quite heavily on my thigh.

“I would have really hurt myself if I was fairly unfit. I had a bruise on my leg for three or four days.

“My wife struggles with osteoporosis and if she had fallen over like I did, she would not have got back up. 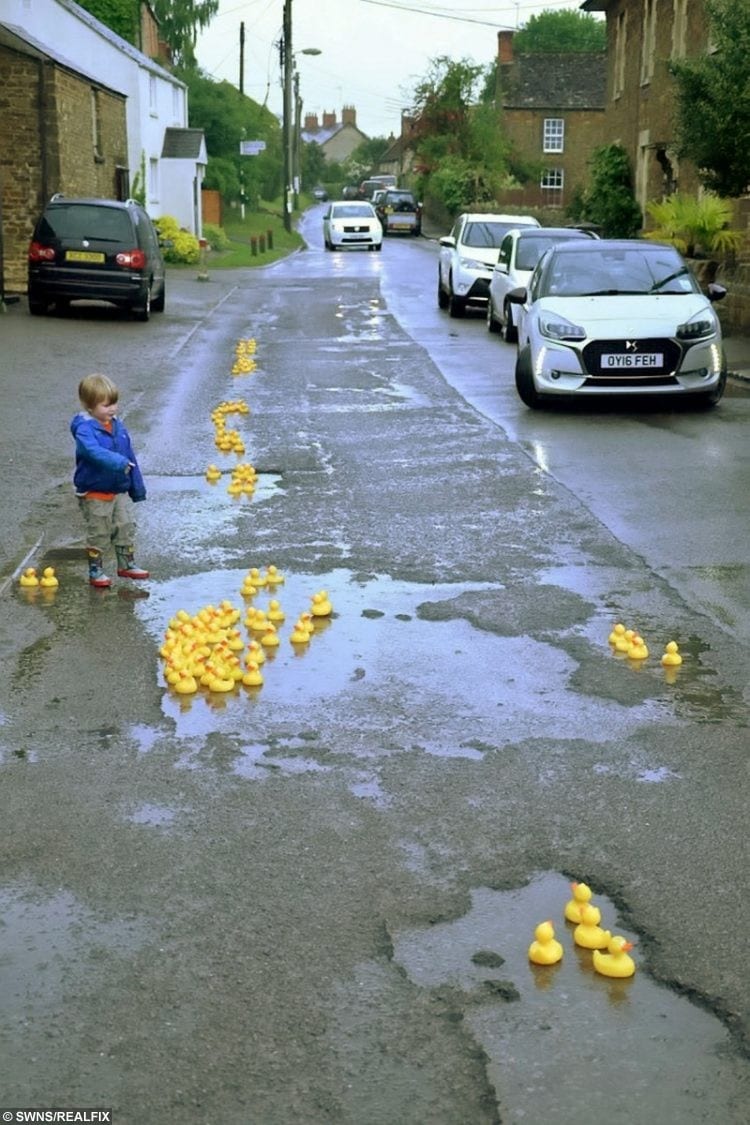 The protest seems to have paid off, with the council officials planning on visiting the village this week to assess the issue.

A spokesperson for Oxfordshire County Council said: “While the issues raised don’t represent a safety problem we do recognise that the road there is in a particularly poor state.

“When we have determined the most appropriate method of repair we will be in touch with the parish council to let them know what we will do and when.”

The AA has said potholes affect more than six million drivers per year, with the repair bill estimated at £684 million.

In Bath, a guerrilla gardener is protesting against the problem by filling potholes with flowers.