The couple cross the M25 near the Dartford crossing in Kent

An idiotic couple risk their own lives as they run across the M25 motorway while high speed traffic races past in this shocking video.

Oncoming drivers blared their horns as the reckless couple cross the six lanes of motorway at around 9pm on Friday night.

Ambulance technician Kieran Williams, 29, caught the shocking footage while he was stuck in traffic following a crash near to the Dartford Crossing in Kent.

Mr Williams, of Dorset, said: “It was amazing. Absolutely shocking. The lane was travelling at normal speeds at that time of night.

“How he managed to get across there with out getting hurt or causing an accident I do not know. It was awful.

“He had to go across four lanes of motorway before he got to a barrier and then a further two lanes after that.”

The incident was captured while thousands of motorists were left stranded for three hours on the M25 after a lorry overturned near the Dartford Crossing at 7pm. 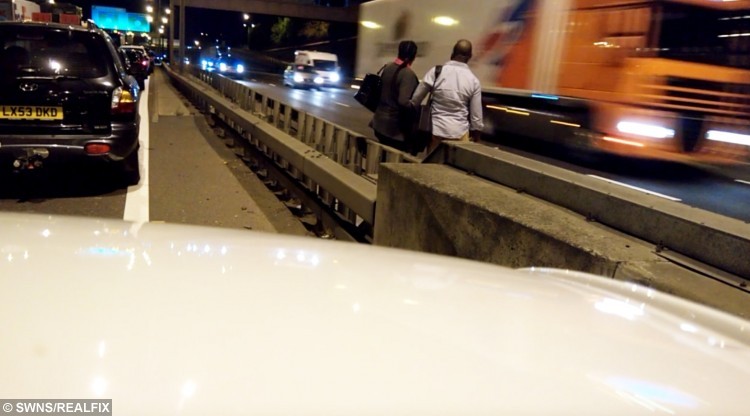 The black man, who appeared to be in his late 30s, appeared on the clockwise side of the M25 which was unaffected by the crash at around 8pm.

Mr Williams saw him cross the road, as traffic flew past at 70mph, twice to collect bags from a car stuck in the jam.

On the final trip he ran across the road with a black woman, as passing motorists blared their horns. 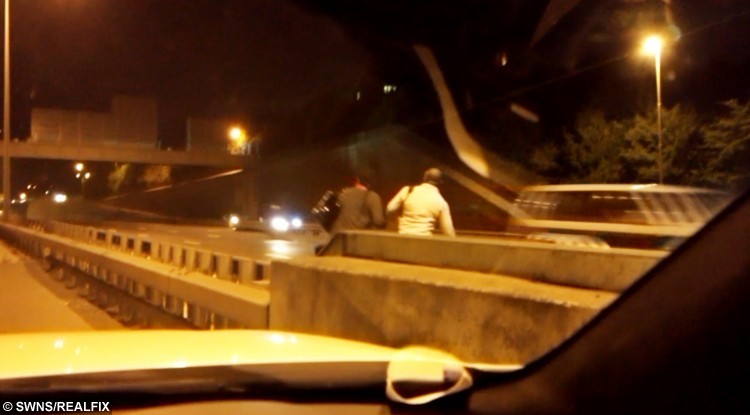 Mr Williams, who captured the video from his car, said: “They were old enough to know better. They should have some patience.

“No one likes waiting in traffic but it’s a lot safer than running across a motorway.”

The pair have been slammed for endangering their lives while emergency services were busy trying to clear the overturned van that a woman had to be cut out of.

It is not believed her injuries were life-threatening.

A Kent Fire and Rescue spokesman said at the time: “Crews have stabilised the vehicle and are using hydraulic rescue equipment to create space for ongoing treatment and removal of the casualty.

“Two passengers in the overturned vehicle and another occupant of the second vehicle involved had been freed before crews arrived.”