A shy autistic teenager with an astonishing singing voice has won thousands of fans on the internet and dreams of meeting her idol Ed Sheeran.

Ashleigh Fagan, 17, is partially sighted and cannot read or write music, but she does not let her disability hamper her.

The gifted schoolgirl can pick up a song by listening to it repeatedly and rapidly works out how to play it on a guitar, practising in her bedroom.

She can even play the harp and tin whistle, but along with a visual memory which helps her to learn song lyrics she has a crystal clear singing voice.

Shy Ashleigh does not like to sing to a live audience, but her home-made recordings filmed in her bedroom have gained her thousands of fans online.

And her ultimate ambition is to meet the red-haired pop star when he tours in Ireland next year, and sing a duet with him.

With nearly 15,000 people following her Facebook page, Help Ashleigh Meet Ed Sheeran, she is optimistic that her lovely voice might catch his attention.

Ashleigh said: “I would love to sing with Ed Sheeran, my favourite song is Castle on the Hill. I’ve listened to it lots of times and can play it on guitar.

“I just sing in my house and sing covers.”

Studying at a school near her home in Dublin, for partially sighted children, Ashleigh was overjoyed to meet a music teacher who could help develop her skills.

She was encouraged to learn the harp, and scored a distinction in a recent exam.

The youngster taught herself guitar aged 14 and has developed her ear for music to the extent that she can listen to a song and quickly work out how to play it.

She can even play Rhianna’s hit, Only Girl in the World, on the tin whistle.

The videos she posts, mostly filmed in her bedroom, attract scores of positive comments every day.

Recently Ashleigh recorded two songs at a local studio, Dancing On My Own, by Calum Scott, and Ed Sheeran’s Thinking Out Loud.

She added: “It takes me a few weeks to learn a song so I just sing it again and again.

“I was learning Perfect by Ed Sheeran.”

Her devoted mum, Liz, 38, set up the Facebook page two years ago which initially reached friends and neighbours.

But soon it gained momentum, and thousands of people were tuning in to watch Ashleigh sing.

She sometimes uploads three videos a day, and they garner hundreds of likes.

Her diverse taste in music ranges from classics such as Somewhere Over the Rainbow, to metal band Linkin Park.

But what they all have in common is an amazing lack of self-consciousness as Ashleigh performs to her unseen audience.

The second eldest of six children, Ashleigh’s siblings have not yet twigged they are living with a low key pop star.

But messages sent from fans around the world are testament to the power her voice has over people.

One person wrote: “I watch your videos every day and you never fail to put a smile on my face. It would be my dream to meet you.”

Others encouraged her to record an album.

Ashleigh’s proud mum Liz said it became clear at an early age that music had a transformative effect on her daughter.

She said: “When Ashleigh was younger I always played music to put them to sleep. I gave Ash a Casio piano, she started copying and miming the way they talk.

“That’s the way she started out. She would come in and listen to music on the telly and then copy it.

“She learnt by ear – she taught herself the guitar and harp.

“I think she can hear something and play it.

“She just sits in her room and plays music. She hasn’t got the ability to write a song, I do all her writing for her.

“But she’s very good at typing.”

Ashleigh dreams of going on X Factor but her mum, who is her full time carer, was concerned it might be too overwhelming, due to Ash’s autism.

“She’s never been to a concert or anything like that,” single mum Liz said.

“I just fear for her hearing, that it would send her into a meltdown.

“Music is the only thing that keeps her calm.” 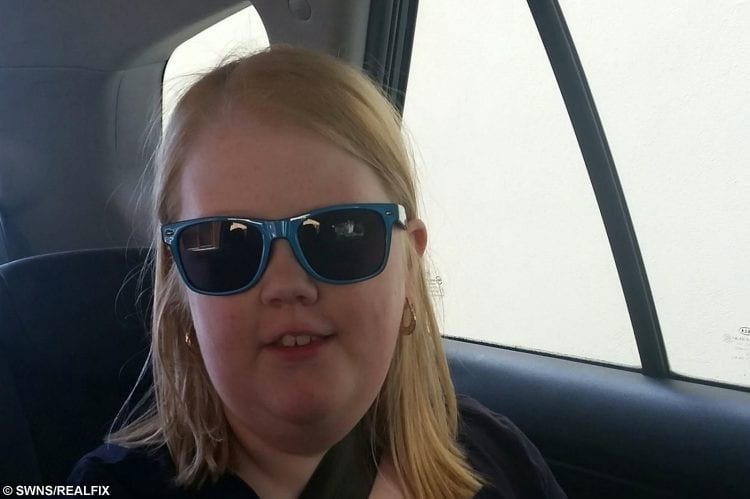 Ashleigh was diagnosed with autism at 12 years old, but was developmentally delayed, with her mum calling her ‘my forever baby’.

She did not open her eyes until she was aged four or five months, when doctor’s noticed they were not as they should be.

Now the admirable teen walks with a cane and attends a school for children with sight problems, where she has thrived.

Liz added: “She just loves music. She’s learning Perfect by Ed Sheeran off the new CD. Her voice is getting a lot better.”

Since going into the recording studio, Ashleigh has been begging older brother Mark, 19, to build one in the family home.

Twin sisters Lauren and Jade, 14, regularly sing in a local choir and are impressed by their older sister’s fame.

But little Christian, nine, and Luke, six, have not yet clocked on to their sister’s talent, Liz said.

She added: “The twins are excited but the boys don’t show any interest at all.”

At Ashleigh’s 17th birthday an enormous cake was baked for her with a colourful microphone and mobile phone made out of icing sugar.

And the year before she was given a birthday cake shaped like a guitar.

Ash said: “I would love to sing with Ed Sheeran. He’s coming to Ireland next year, so we’ll see.”

Sting In The Tale : Mum Lucky To Be Alive After Being Attacked By Stingray – And Stabbed In The Foot