A sick teenager who went home to die two years ago has defied medics by battling back – and his tumours have even shrunk.

Jake Rafferty’s parents Emma and Adrian Rafferty were told 16 times there was nothing more medical staff could do and their son was going to die.

On one occasion, when doctors said he had just hours to live, the distraught parents took him home to die in comfort – and started to plan his funeral.

But the plucky young lad survived, and now two years later, the 14-year-old is starting to show signs of recovering from the spinal tumours that paralysed him. 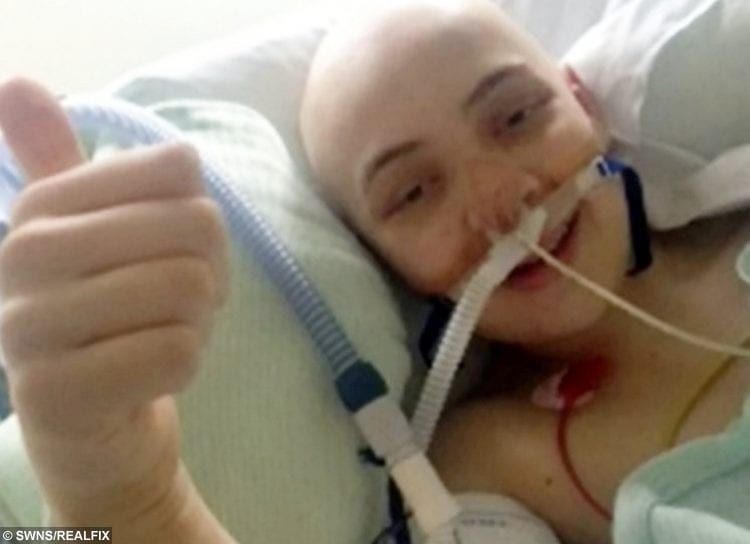 Mum Emma Rafferty said Jake, who was riddled tumours from the waist upwards, was “an amazing fighter who refused to give into his cruel illness”.

The only option was complex surgery which left the sports-mad lad wheelchair-bound – and paralysed from the waist down. 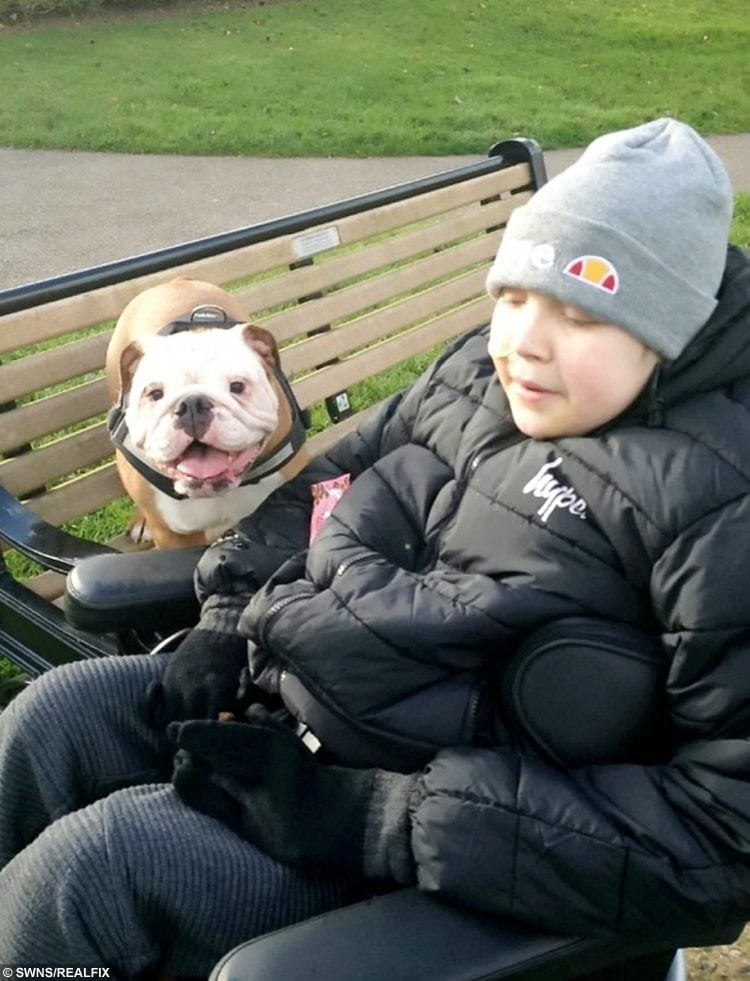 After surgery, he was put on a daily six-week radiotherapy course that left him suffering terrible side-effects.

Despite the treatment Jake had seizures and the tumour doubled in size.

But his parents rejected traditional treatments offered by hospital doctors to spend up to £600-a-week on special food supplements from America as well as talking to experts in India, the US and Spain. 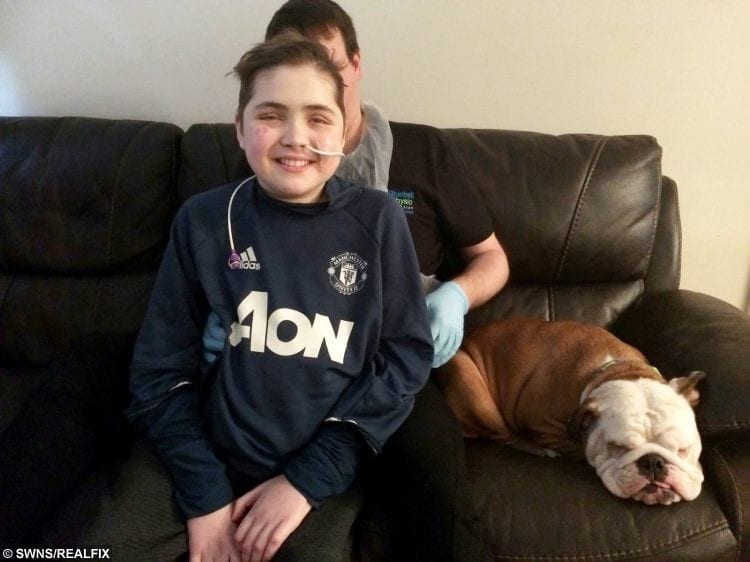 Two years later, after spending around £25,000 and suffering numerous serious setbacks, Jake, who is wheelchair-bound and paralysed from the waist down, is starting to regain some muscle movement.

Remarkably, a recent MRI scan and blood test showed his condition had stabilised and even that the tumours around his spine had begun to shrink.

He is now breathing unaided and, apart from anti-seizure pills, is off medication.

Emma, 37, said: “They said they could not see any tumours in his brain and those in his spine had shrunk.

“The nurses said they normally expect patients in his condition just get sicker.

“They said whatever you are doing, carry on because it appears to be working. 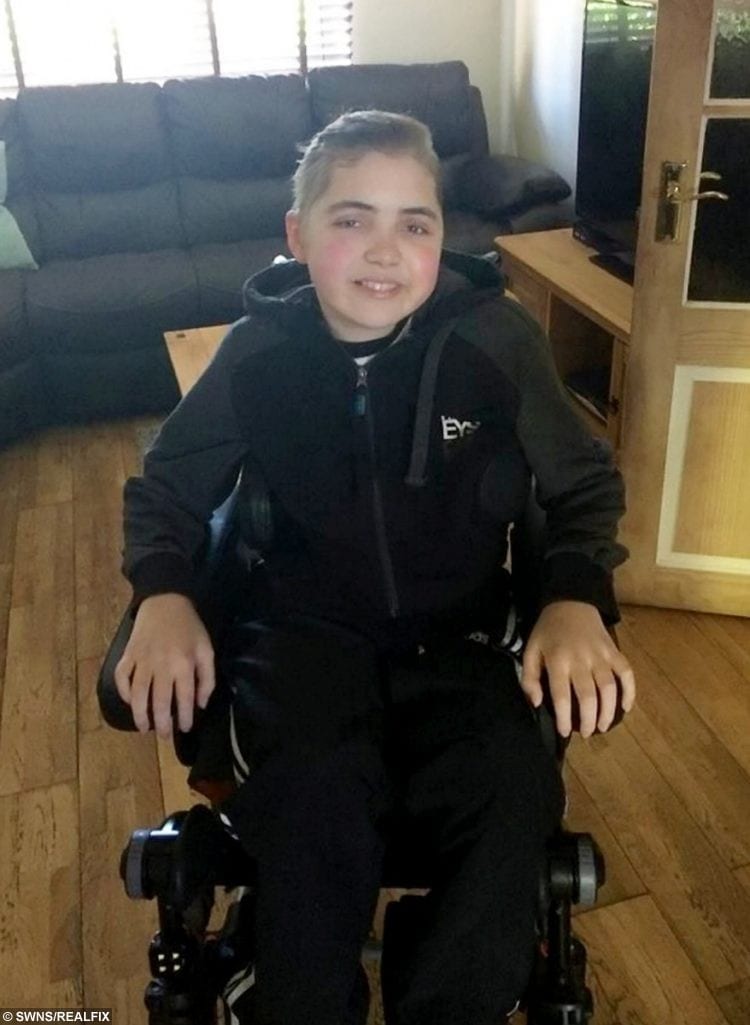 “He’s got such fight in him, he wants to get a new wheelchair so he can do rugby and get active.

“But he’s not moved for two years so he needs a lot of physio. This time next year he will be playing his Xbox.

“Jake is pioneering the future for a cure for cancer.

“Doctors have got not explanation for it, they are quite surprised.

“They say it is only temporary and the tumours will comes back and get worse.

“We could not do what we are doing without the incredible generosity of friends and complete strangers.”

She says the family were threatened with court action when they told doctors they were changing his diet, but after Jake said they backed down.

“We took Jake off hospital feeds and doctors told us he was going to die and there was no hope left. I just thought there has got to be something else to try.

“I did a lot of research into the body and why cancer happens in the first place and decided to take all the junk food out and he doesn’t even crave it anymore and just eats fresh foods.

“We have seen how easy they can let kids go and some other parents on the ward we met as well.

“We got threatened with court action because we were stopping the hospital feeds and being in our own system.

“The opiates they were giving him were causing breathing difficulties. They tried to get us to sign a DNR but we refused. He told us himself ‘don’t let me die’.

“He’s really happy and doesn’t like to dwell on it, he just gets on with it. He’s just trying to work hard with physio and his excited or what the year will have for him.

“He’s a miracle the amount of times he’s bounced through we feel really lucky the way it’s happened.

Jake is now having physiotherapy at home twice a week and goes to occupational therapy sessions to try and regain the movement in his arms.

The brave youngster even wants to climb Mount Snowdon in Wales in his wheelchair.

Emma and Adrian, 50, a police officer, are fundraising for specialist equipment which helps with weight bearing movement.

They also hope to buy a stunt wheelchair like one used by Jake’s hero Aaron Fotheringham, an American extreme wheelchair athlete who performs tricks adapted from skateboarding and BMX.

Adorable Photographs Of Dogs Across The UK Loving The Snow Life