A wedding dress seller has been left scarred after suffering a horrific allergic reaction to waxing strips on her face – just before she was due to go on television.

Chloe Hutchinson, 24, decided to try out Veet’s Easy Grip Wax Strips for the first time a few days before she was due to film for hit TLC show Say Yes To The Dress.

Despite conducting a patch test and suffering no reaction, within 24 hours of applying the strips to her cheeks, chin, and eyebrows Chloe began to notice small bumps appear on her face.

By the next morning, the bridal consultant’s had erupted in an aggressive red rash which was so painful it left her unable to move her cheeks.

Chloe, who lives in Brixton, south London, went to an NHS Walk in Centre in nearby Streatham, who told her it was a bad reaction to the waxing strips.

They prescribed her cream and a two week course of antibiotics, which she had to take over Christmas.

But the rash didn’t start to improve for another ten days, and took almost a month to clear up properly – leaving Chloe in tears at the state of her appearance.

Chloe, who has a long term boyfriend, said: “It was absolutely horrific, and being on my face just felt so much worse, I was mortified.

“My whole face had just erupted.

“I bought the product because I’d read such good things online and I’m not particularly hairy but I wanted my skin to look all silky on camera.

“The director told me not to bother coming in the end, so I missed all of the filming and I was just so upset I was going to spend Christmas looking like that.

“I had two weeks off work and I was literally crying every day I was so self conscious and I’d missed so much, all of my Christmas parties, even my own.

“I don’t have severe allergies or skin problems and I’ve always been completely fine using any products, so this is massively out of the blue.”

Chloe contacted Veet four days after the rash first broke out, but says she received a half-hearted response around six weeks later. 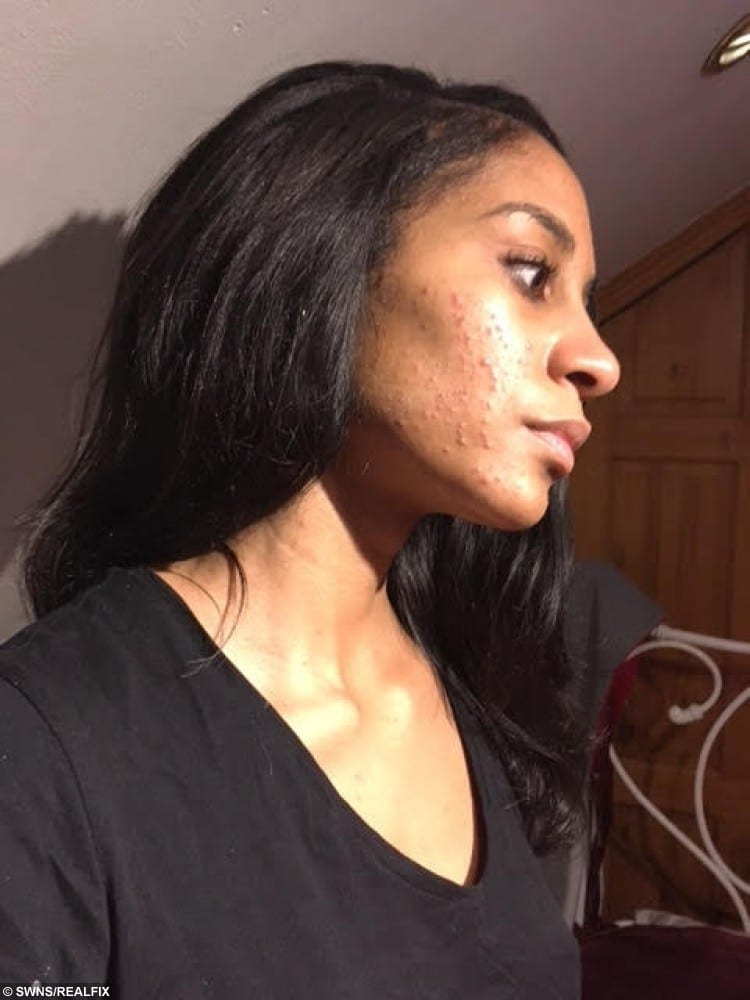 The third year Law LLB student at BPP University Law School says she has been left needing treatment for her scars, and their offer of a refund just isn’t good enough.

Chloe added: “As a law student I knew that I was well within my consumer rights, I did a patch test and waited 24 hours as the instructions advise but it was only when applied to my whole face I reacted.

“My skin has now been left all scarred and scaly, I used to wear just a bit of concealer but now i’m having to pile on heavy duty foundation.

“I couldn’t believe the response from Veet, they took so long to get back to me and then offered me under a fiver which is what I paid.

“I wouldn’t touch their products again with a barge pole.

“All they’ve offered me is the £4.30 back and I had to suffer for their negligence.

“They said they’d put the product in for testing but I’m worried about the same thing happening to other people.”

A Veet spokesperson said: “We are sorry to hear about Chloe’s experience.

“We continue to look into this case and while we appreciate this takes some time, we are committed to undertaking a thorough investigation.

“All Veet products are vigorously tested for safety and efficacy.

“As with all hair removal products, Veet should always be used as per the instructions provided.”

WATCH: Tiny surfer shows off his skills – at just four-years-old