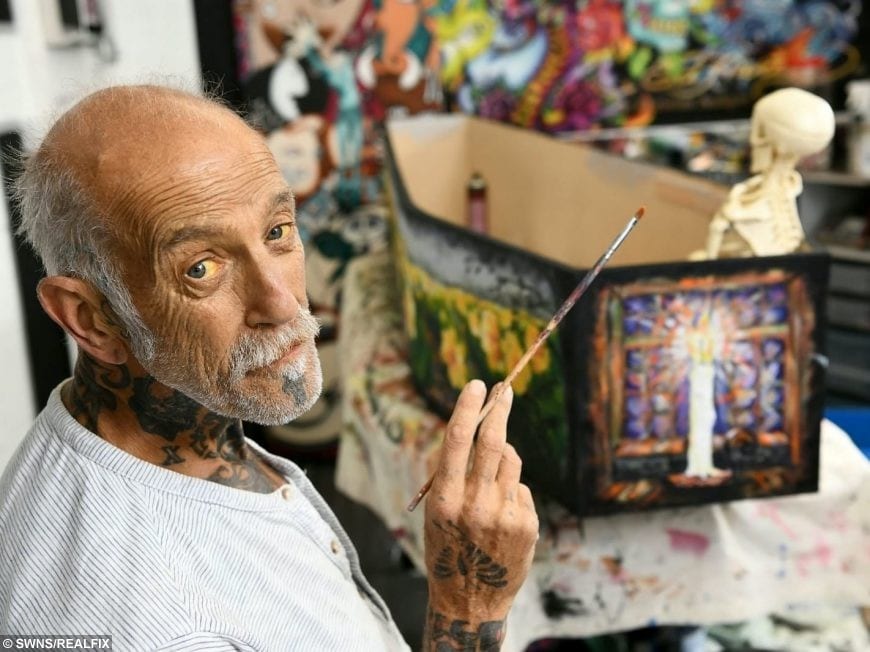 A dying tattoo artist has painted his life story – on his own COFFIN.

Jeffery Beale, who has run his own tattoo parlour for more than 20 years, was told two months ago he has terminal esophageal cancer.

He has now designed and painted his own coffin and spent the last three weeks designing his final masterpiece.

On one side, the colourful coffin features snippets of Jeffery’s life, including motorbikes, his dog and wildlife.

The other side is a field of daffodils, which is a memory that has stuck with him since he was a small child.

Jeffery, 60, of Plymouth, Devon, said: “It’s been quite therapeutic.I tried to build up some of my life story here on this,

“I love my bikes and I used to build bikes and ride them and go off on adventures.

“Then I’ve got the shadow when I’m walking the dog down there and the birds, I love birds and wildlife and all that.

“Then the hedgehog, we’ve got one living out the back in the back garden and there’s me painting there.

“I love playing the banjo as well which is on there, the little devil sneaking out there and another bike coming inwards on that side.

“I never knew what I was going to paint all I knew was daffodils, I love daffodils and I got a vision of going down Tamerton Foliot picking daffodils for Mother’s Day and the field was just masses of yellow and it stuck in my head.

“I just thought it’d be something different to do.”

Jeffery said that he is satisfied from his career and he has “made a little mark on Plymouth”.

He spent around 35 tattooing in the city and ran his studio Elemental Tattoo in Ebrington Street for 20 years.

“I’ve got no big ambitions, I’ve done everything I wanted to do, tattooing is my life, it’s given me everything I’ve ever wanted.”

Jeffery said that he did not have any idea that he had cancer and put the aches and pains down to strain from tattooing for many years.

He added: “I didn’t know I had this cancer until it was full blown, it’s done its thing, there was no warning, yes I had little pains and twinges but I thought it was strain from the tattooing which I had done for years and years.

“I’m really happy, I’ve never been this happy before, it’s brilliant. Life I’m appreciating to the full, it’s like magic.

“It’s strange isn’t it really that you have to get to this stage to appreciate it?

“All the little tiny things in life you appreciate so much more. It’s all the small stuff.

“I could have appreciated it more years ago, so that’s why I tell people. Maybe they will appreciate it themselves a bit more because you just don’t know.”

Jeffery said he was told the cancer had spread through his throat, to his chest and now to his liver, but he is still doing the things he loves in life, like painting.

“These could be the final ones, I’m still carrying on painting, I’ll paint as long as I can, I love it” he said.

Jeffery said that despite his love for art and tattooing, “nothing has ever been planned” in his life and he fell into the career, which he ended up falling in love with.

He said: “A friend turned up, owed me a lot of money but he didn’t have the money so he gave me a tattoo machine and I said I’d give it a go like.

“I started tattooing at home and converted my shed, it wasn’t planned.

“I did a bit for around five years at home and thought I’d get a shop and never looked back, ever.

“It’s never been like going to work either, the only reason it’s a job is because you have to pay rent.

“Nothing has ever been planned in my life it just happened, but if I wanted something I’d get it, you just have to think positive.”

After Jeffery left his shop last year, he converted his garage so he could work “semi-retired and continue doing what I love doing”.

But sadly, this did not go to plan.

He added: “I converted the garage and got the health authority to come and register it, I was going to be like semi-retired and continue doing what I love doing.

“That was my plan but it didn’t quite work that way.

“Two weeks tattooing and then I just didn’t feel right, I couldn’t put my finger on it.

“I kept going back and forth from the doctors and in the end she just said ‘I don’t know what to do with you Mr Beale any more, I know what I’ll do, I’ll send you up the hospital for a scan’.

“Of course when they done the scan they saw all the black stuff and so I went for a CT scan and that’s when they seen it all.

“They did offer me chemo, but that ain’t going to happen for me because it’s too far gone, and as it is at the moment I’m really enjoying life, I’m buzzing.”