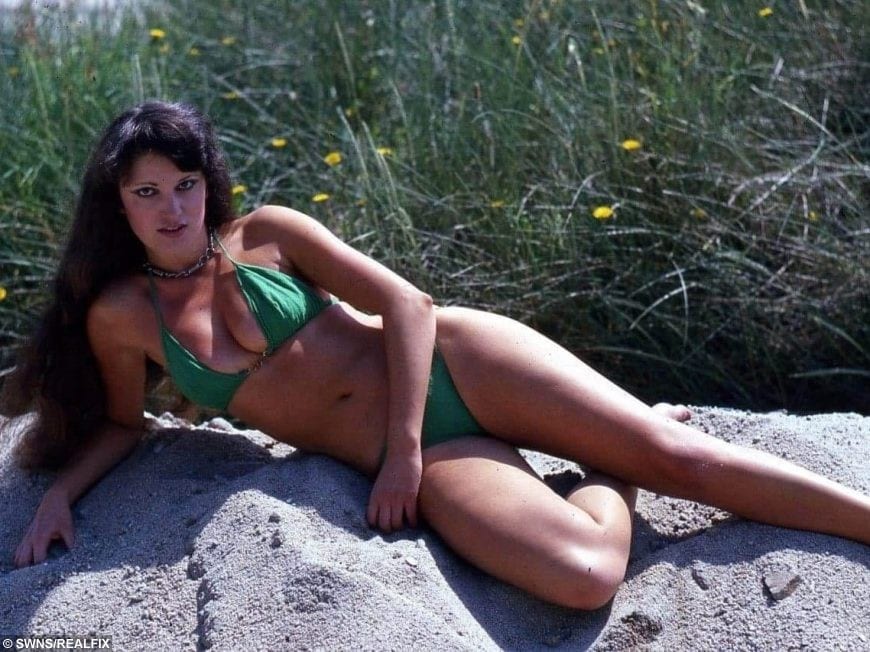 Britain’s oldest glamour model has donned a bikini she first modelled in in her 20s for a racy new shoot – at the age of 68.

Suzy Monty kicked off her modelling career when she won a catwalk competition aged just ten and has never looked back.

During the next 58 years she has appeared in dozens of calenders and magazines.

And in her stunning new shoot, Suzy has flawlessly recreated a set of photos she took 40 years ago – right down to wearing the same green bikini she posed in back then.

Incredibly, Suzy, from Truro, Cornwall, has never had any surgery or even dyed her hair – and says that she is busier than ever, and is “inundated” with requests from photographers.

The glamour model says she has no plans to hang up her bikini any time soon.

She said: “I’m very, very busy and there seems to be a big market for mature models at the moment.

“I’m all natural, have had no surgery or ever even dyed my hair and that goes a long way. I’m inundated with requests from photographers.”

Suzy works for two modelling agencies as well as doing freelance work and has even had work published internationally, including having an entire edition of One of a Kind magazine dedicated to her.

Looking back over her career, Suzy added: “I won a catwalk competition when I was 10 and in my 20s won Miss Cornwall Bikini and Miss Cornwall Swimwear contests.

“Then the modelling really took off and I was behind the first fully licenced modelling agency in Cornwall, Devon and Somerset.”


I’m all natural, have had no surgery or ever even dyed my hair and that goes a long way.

But it hasn’t all been plain sailing for Suzy – as she had to temporarily shelve her modelling aged 40 when she contracted glandular fever, which took a year to get over.

Then, inspired by Helen Mirren releasing some red bikini pictures, Suzy teamed up with a national press photographer when she was 57 to shoot some pictures on a Cornwall beach.

She also had to take time out in her early 60s after being diagnosed with a one in 100,000 tumour, undergoing surgery from which Suzy admitted she never expected to return.

But despite gloomy predictions she bounced back, and since returning to the industry full-time, she has had reams of positive feedback and even been branded an inspiration to others.

She said: “There’s always good feedback and I’ve had messages from ladies over 50 who have said they feel invisible and thanked me for what I’ve done.

“I always eat healthily. I love cooking myself with fresh ingredients and eat lots of locally caught fish.

“I walk my dog for miles every day and have never smoke or drank.

“But what people don’t realise is that modelling itself is a great pilates workout, holding poses and flexing musclesfor hours.”

When asked how long she plans to keep modelling, Suzy replied: “Well I’ve been told I’m the UK’s oldest glamour model and a photographer said I’ve got to keep going to 70 at least.

“If I can keep my strength, health and figure I will keep going.

“I can’t thank my husband enough. We’ll be celebrating our 46th wedding anniversary soon and he is always supporting me, chauffeuring me to shoots.”

Tags: bikini, body positivity, glamour model, modelling
« Previous post Little Boy With A One In A BILLION Condition Is Able To Walk For The First Time - Thanks To Complete Strangers
Next article » Dad Stunned When He Hears His Little Girl Shout While Going To The Toilet – Only To Discover She’d Got The POTTY Stuck On Her Head